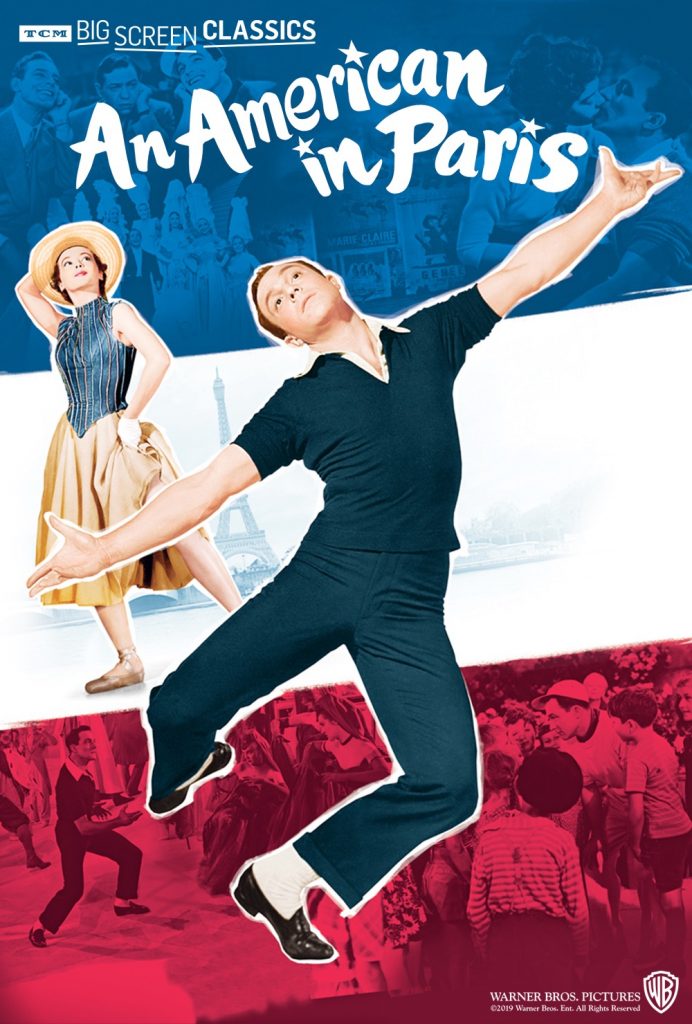 “American in Paris” Returns to the Big Screen

Academy Award-winning Best Picture American in Paris (1951) is returning to theaters January 19 and 22 as a Fathom Event from Turner Classic Movies. Producer Arthur Freed saw the movie as a chance to combine two of his personal favorites – the music of George Gershwin and French Impressionism. Because of difficulties in making travel arrangements and securing locations, most of the film was shot on 44 sets located in MGM Studios in California with only 2 sequences filmed in Paris. The film was directed by Vincente Minelli from a script by Alan Jay Lerner. Because Minelli was divorcing Judy Garland at the time and working on other projects (Minelli finished directing Father’s Little Dividend during a break in production), Gene Kelly directed some of the movie.

The film centers on American-in-Paris Jerry Mulligan (Gene Kelly), a World War II veteran who is in Paris trying to find success as a painter. He sees and falls for shop girl Lise Bouvier (Leslie Caron), which results in a love triangle as Lise already has a boyfriend, French singer Henri Baurel (Georges Guetery) – who just happens to be Jerry’s best friend. Jerry also meets the heiress Milo Roberts (Nina Foch), who takes an interest in him and sponsors a showing of Jerry’s artwork.

The film was inspired by George Gershwin’s “American in Paris – A Tone Poem for Orchestra” and the movie features a 17-minute dance sequence between Gene Kelley and Leslie Caron set to the tune. Producer Arthur Freed reached an agreement with Ira Gershwin during their weekly pool game for the film rights to the song. The sets and costumes for the ballet sequence reference famous French paintings, and the sequence ultimately cost the studio $450,000 to produce. Gene Kelly choreographed and directed the dance sequence; rehearsals took 7 weeks and shooting the sequence took 4. The idea for the sequence arose partway through production when actress Nina Foch became unavailable for filming for several days after contracting the chickenpox. The epilogue to La La Land (2016) references the famous sequence.

Other songs featured in the movie include “I Got Rhythm”, “Love Is Here to Stay”, “Embraceable You”, “I’ll Build a Stairway to Paradise”, “Nice Work if You Can Get It”, and “’S Wonderful”. Additional music was provided by Musical Director Saul Chaplin, who won an Oscar along with Johnny Green.

The teenaged Caron was brought to Hollywood from Paris after Gene Kelly saw her dancing with the Ballet des Champs-Elysées while he was on vacation. She didn’t speak English at the time, only being vaguely familiar with the language because of her American mother. Because of the effects of malnutrition during World War II, Caron could only work alternate days during filming. American in Paris was her first film; she later went on to star 45 films including Lili (1953) and later Gigi (1958) – which won 9 Academy Awards and 6 Golden Globes. Gigi saw Caron reuniting with director Minelli and screenwriter Lerner.

Minelli was nominated for a Best Director Oscar and Lerner won the Best Writing, Story and Screenplay Oscar for American in Paris. Lerner wrote the screenplay in a 12-hour period on the night before his wedding. Other Academy Awards won by the film were: Best Picture; Best Art – Set Decoration, Color; Best Cinematography, Color; Best Costume Design, Color; and Best Music, Scoring of a Musical Picture. It was nominated for but didn’t win Best Film Editing. It was the first film to win a Best Picture Oscar and a Best Picture – Musical or Comedy Golden Globe. It is one of the few Best Picture Oscar winners to not receive any Oscar nominations for any actors, although Gene Kelly was given an honorary Oscar that year. It was the first film to win both Best Picture and Best Original Screenplay and also the first Best Picture winner to also win Best Scoring of a Musical Picture; it is the only musical to win Best Original Screenplay.

The film is ranked #9 on the American Film Institute’s list of Greatest Movie Musicals.

Information regarding showings of American in Paris as part of TCM’s Big Screen Classics can be found at Fathom Events.