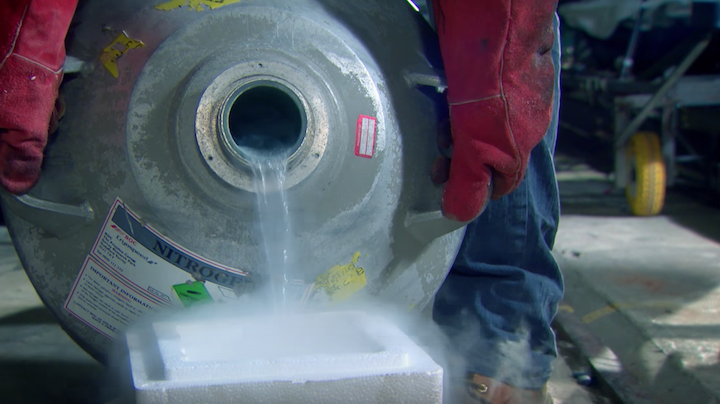 Cremation is generally the option for anyone who wants to be more Earth friendly. Or get their situation dealt with on the cheap. Let’s face it death is a touchy subject and when you bring in funeral costs it can get even messier. Plus when you burn a corpse the smoke that is released isn’t necessarily good for the ozone. And the carbon footprint you were trying to diminish goes completely out the window. Now though, scientists have found an even cleaner way to cremate someone. And it’s by Freeze drying them and then shattering their body.

Promession, developed by Swedish biologist Susanne Wiigh-Mäsa, is supposed to be more environmentally friendly than other ways of preparing a body. They put your casket into a vat of liquid nitrogen at about -196 degrees Celsius. Then remove you and the casket. At that point the casket is so brittle that any type of vibration will shatter it. The rest of the water is then evaporated and they go over the body with a magnet to remove any metals like teeth fillings.

The Future of Customer Experience Management in Telecom

How Metaverse is Going to Change the World

They then place the remains in a biodegradable container and bury it in the ground. This is what scientists are calling the cleanest way to dispose of a body. And it doesn’t seem like it would take much convincing if a person already wanted to be buried.

Subscribers Are Canceling Their Disney+ Subscriptions After Mandalorian Season Ends

These Ghibli Calendars Are The Perfect Way To Start Each Day