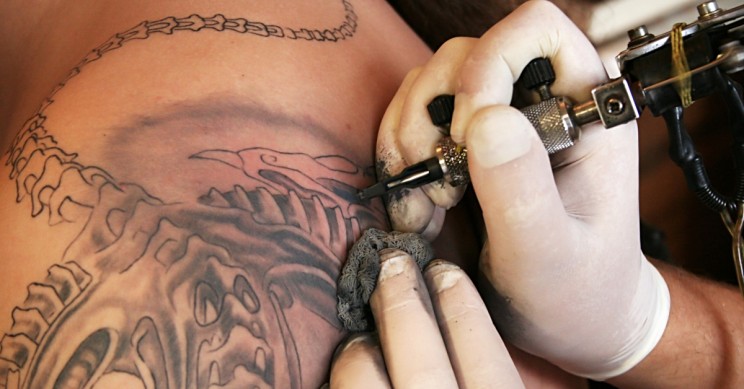 A Brief History of Tattoos

I have a few tattoos. All of mine are pop culture related because I am a very cool person and totally bad ass, so I needed a Kirby/Pikachu mashup on my arm. But tattoos have a long history around the world from Samoa to Japan to the Vikings to the earliest humans we know of.

The English word tattoo is a loanword from Samoa. It roughly translates to “strike”, as in the process of striking the skin to put the pigment in. But the Western World knew about tattooing long before that, usually referring it to painting or scarring. Tattooing goes back AT LEAST 3,000 years to our old timey ancestors.

Otzi the Iceman had a ton of tattoos when he died around 3100 BCE. He died in a bog in the Alps – which explains why his body is still around – with some 60ish tattoos. However his tattoos appear to be therapeutic/spiritual in nature and not really cosmetic. That is, Otzi had the kind of tattoo that someone might’ve gotten to “fight” arthritis or knee issues. They were markings of a “medicinal nature”.

One of the oldest know tattoos that appear to be strictly to make someone look good show up on a mummified body in Chile from around 4,000 BCE, give or take. This mummified man came from the Chinchorro indigenous people. He sported a styling tattooed mustache. Apparently the mustache tattoo meme was alive and well in the ancient Americas.

One of the oldest surviving writings about the Viking people by Arab writer Ibn Fadlan way back in the 10th century describes them as tall and covered in tattoos from head to toe. These tattoos were likely wood ash tattoos, giving the appearance of a blueish or blackish color with lots of knots and other designs common at the time. You may know Ibn Fadlan and his story about meeting Vikings as the basis for the novel that became the entirely fictional The 13th Warrior movie.

As the Europeans started to navigate the world to meet people of beautiful cultures and then either trade goods with them or murder them and steal their gold and land, more modern Europeans who had mostly fallen out of the world of tattooing and body modifications started to meet cultures still actively tattooing. These cultures include many of the peoples of the South Pacific, like the Samoans for which tattoo is named, and parts of Asian like Japan and China. Though in China and elsewhere these tattoos were often punishment rather than ritual or personal choices.

Just a quick list of the groups of people known to tattoo include: Polynesians, Picts, Vikings, Indigenous Americans, Ainu people (indigenous Japanese), Inuit, Berber women in North Africa, the ancient Egyptians, and a few African ethnic groups and Tribes such as the Hausa people.

The modern history of tattooing and the idea of the modern tattoo really kicked into high gear back in the 1560’s when French sailors kidnapped an Inuit woman and her daughter. This was followed by more kidnap victims, slaves, and the occasional willing participant being brought from various corners of the world to be gawked at by rich Europeans. Jeoly, a Filipino slave stolen from his home and bought by the English, became the most famous tattooed person of this period, known as the Painted Prince.

As a result of all the kidnapping and ship voyages, many European sailors started to get traditional tattoos as in those using sticks and bones being poked into the skin with wood ash or other dyes. As with all fads poor people start, rich people stole the tattoo fad and by 1894 Sutherland Mcdonald was the first professional tattooer in England.

With sailors came the popular idea of tattooing among military and navy folks with a few MAJOR DARK MARKS on the history of tattoos. Many slaves were (and still are (yes, there are still slaves on our planet)) marked with tattoos of ownership. And of course one of the saddest parts of our modern history, the Holocaust during Nazi Germany, featured tattooed people – mainly Jews but a handful of other undesirables like gays – being forcibly marked in concentration camps. As a man in his 30’s, I can absolutely say I have known and met people with these terrible tattooed reminders of their imprisonment. If you aren’t familiar with this piece of history, you absolutely should be.

We now come to the end of our tattoo story. I left out big important chunks like the WW2 naval veterans, prison tattoos, and other related techniques (scarification, accidental tattoos due to accidents, etc.). But, hey, maybe now you learned something about tattoos. Current studies show something like 3 in 10 Americans now have at least 1 tattoo. If you are in your 30’s and under like me, there’s a very good chance about half of us have a tattoo. Some have many more than 1 tattoo. And if you were an 18 year old woman between 1996 and 2006, you probably have a tramp stamp you regret.

Tattoos maybe started as a spiritual or healing practice, pulling in some unseen magical force to a part of the body that needed healing. Then they moved to various ritual or appearance purposes, like the face tattoos of certain Tribal warriors or the tattoos rich people got to show how rich they were. Now every jerk like me has a tattoo.

Just be sure to spend the money and get a quality artist for whatever you want, be it a traditional Tribal tattoo honoring your Polynesian ancestry or a Kermit the Frog because you like Kermit the Frog.

Do you have any tattoos? Let Nerdbot know in the comments!