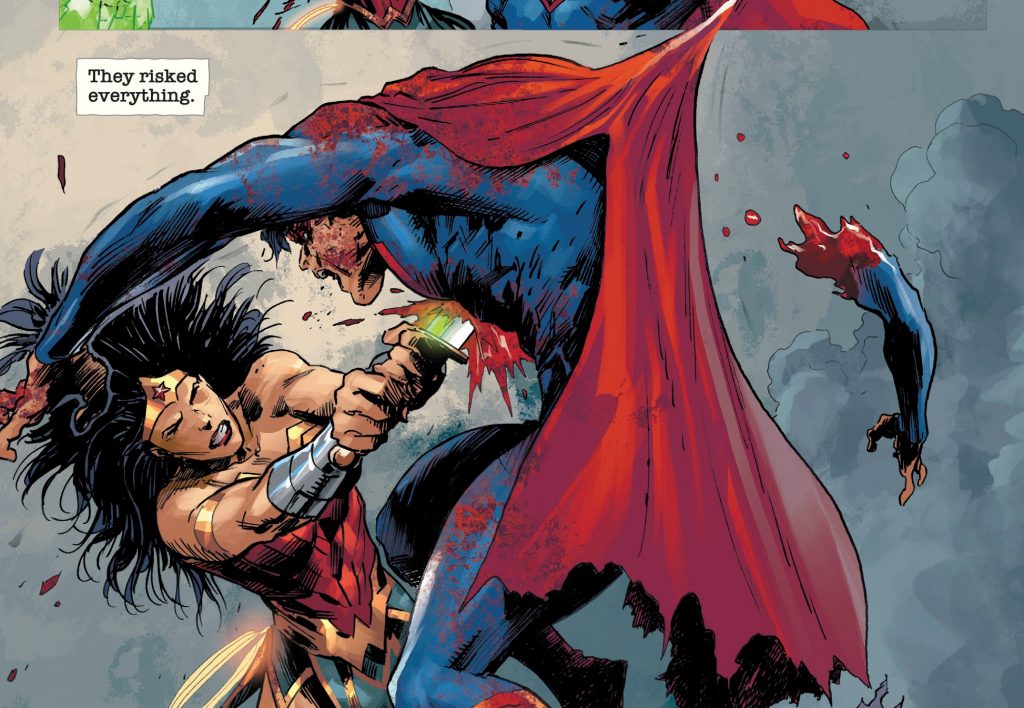 A Hopeful Yet Uncertain Future Remains in DCeased #6

It’s truly the end of the world

The final issue of DCeased and the end is truly here ; can the DC universe survive the blights or will they fall to death a destruction ?

An infected Superman starts his attack on the earth. Meanwhile the blighted Atlanteans attack themyscira and the Arks begin to take off. Wonder woman ( with a magical kryptonite sword), Black Canary and Cyborg take off to kill superman- but fail as Diana gets infected and Superman Takes off into space.

Cyborg finds out that the “cure” was inside himself the entire time, before being beheaded by an infected Wonder Woman. Superboy tries to take on his father, holding him off long enough for Diana and the rest of the Green Lantern Core to arrive. In an effort to take everything out, Superman flies into the sun to absorb all its energy. The GL Core escorts the remnants of human society to a new earth, where the survivors could being life again.

Tom Taylor has delivered the exact type of story that has made the elseworlds / What if stories like this, a highlight of the Dc Comics. You take these familiar characters and set them in a scenario and watch how they live. But in DCeased, the death of everyone is a huge possibility if not an inevitability.

The duality of the anticipation of death and the relief of our heroes survival, is a constant presence in the book right up until the end. Where they know that, no matter what , they can continue to survive.

And part of this resolution does feel underwhelming. There’s no curing or saving those infected, and those with power choose to leave and start again. And to some, this can feel like an unsatisfying conclusion.

But the removal of oneself from a dangerous situation, rather than trying to solve it and get hurt in the process, is a realistic ending for any number of real world situations.

What’s your opinion of this series ? Did you love it or are you just happy it’s finally over. Let us know in the comments down below !