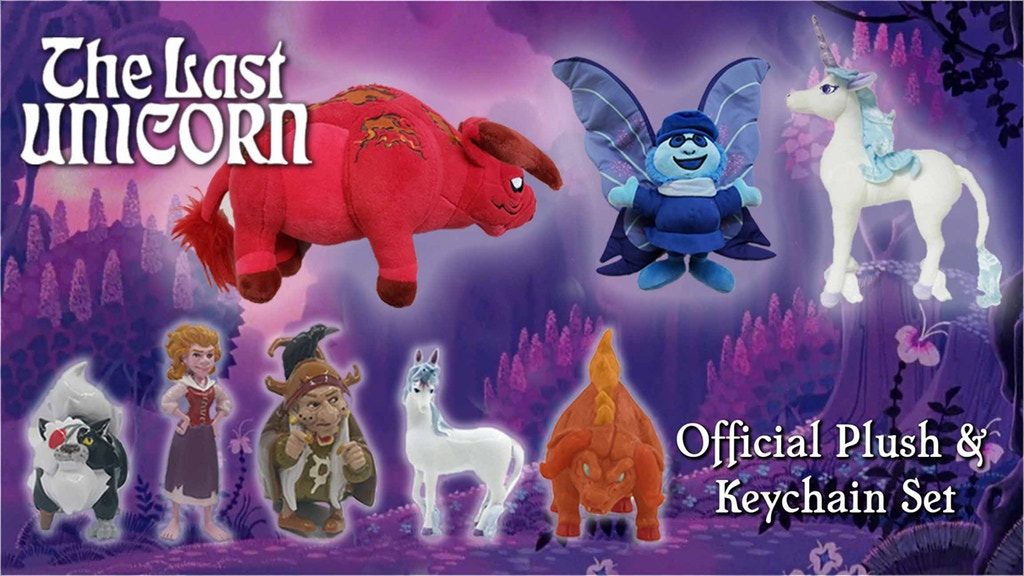 Official ‘The Last Unicorn’ Plush and Keychains Are Coming

One of the most iconic movies of my childhood was “The Last Unicorn”. I liked it because of the beautiful artwork, story and well, Unicorns. My dad liked it because the entire soundtrack was done by the band America. Now to a lot of peoples delight a kick starter has surfaced where you can be part of the magic. At the time of this writing they are about half a little over half way to their goal of $25,000. They have some stretch goals in place and if they reach them we can expect some really awesome stuff.

From the kick starter page:

Nearly 37 years ago, the timeless book The Last Unicorn by Peter S. Beagle was turned into an animated movie. With music by America, voices by Jeff Bridges, Mia Farrow, Christopher Lee, Angela Lansbury, Alan Arkin, and Tammy Grimes, and the immense talent of the animators and creatives who would later form Studio Ghibli, The Last Unicorn was an incredible film that gripped the minds and hearts of all who grew up with it. Though the movie was released decades ago, the music and iconic scenes and lines still echo through our minds. Sadly, there was only a small handful of merchandise ever made for The Last Unicorn, much of it incredibly rare and hard to find nowadays.

That’s where we come in! At Geekify, our mission is to capture the feelings and essence of those experiences that shape us and that we hold dear, and to create pieces of the fictional worlds we fall in love with. We’ve acquired the licensing rights to create merchandise for The Last Unicorn as a personal passion of ours, and one which we want to share with the world. We’ve spent months drawing up plans, creating new artwork, building and designing samples and prototypes, and dreaming up the things we wanted to create.

We’ve been hard at work creating a set of plushes for characters from The Last Unicorn! We’re launching with the three iconic characters of the Unicorn, the Butterfly, and the Red Bull making their debut on Kickstarter, with a host of other designs to be unlocked as stretch goals.

The cast has been expanded to have new artwork of all of the characters below:

Each characters is approximately 1.5″ tall, and will include the Unicorn, the Red Bull, the Cat, Mommy Fortuna, the Harpy, Molly, Schmendrick, the Butterfly, Prince Lir, King Haggard, and potentially a few others as well!

Others could be announced

Adding new plush designs takes considerable time, and they’re undergoing constant revisions to get them to match our vision and designs. With your help, we’ll have the extra resources to tackle new designs and add bonus features.

You can check out the entire Kick-Starter by clicking the link here. They also have a ton of other cool Last Unicorn stuff on their site Geekify.