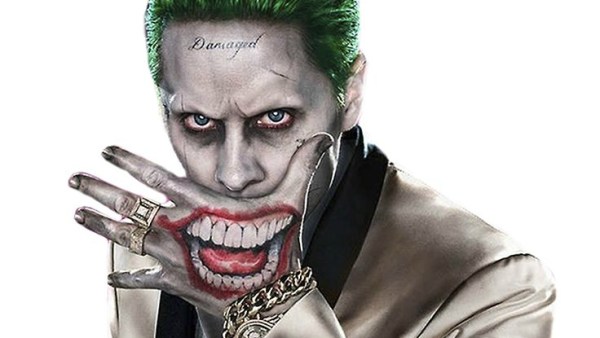 Did you hate the way Jared Leto’s Joker looked in Suicide Squad? Of course you did. It absolutely sucked. Why would you like something that sucks?

But the real question is… did you think it could get any worse?

Personally I didn’t think it could get any worse than a unnecessary, unwanted, and entirely not creative cursive (the squiggly lines your parents call writing) “Damaged” tattoo being drawn on the forehead of the most iconic villain in the comics to film world. However, I was wrong… things could have been waaaaay worse.

Yeah… so on October 16th director David Ayer shared the above photo via his Instagram account and I definitely believe that it’s a far inferior version compared to what we saw back in 2016 which I didn’t know was possible.

As I stare at the photo above it only supports my ongoing argument that whoever was the actual brains behind this incarnation of the Joker has absolutely zero grip on the character. Let’s focus on the “Damaged” tattoo specifically for a second. We all know how dumb of a decision that was. Now think about how stupid Leto would have looked with tattooed “Hahahaha” eyebrows and black teeth. Pretty stupid. I understand wanting to do your own “take” on the Joker but boundaries have to be set or else you run the risk of turning off your audience. The source material actually shows you what these people are supposed to look like for Christ’s sake! It’s not literature. You don’t have to imagine anything.

I don’t know about but I don’t need to see anymore examples of what could have been. Unless the Snyder Cut of The Justice League is getting ready to drop tomorrow, there is zero point in rehashing the blunders of 2016. Why remind the audience that the bad thing you did could have been worse? Let’s just focus on what has been working and what will work in the future.

Does this version of Jared Leto’s Joker look even worse? Let Nerdbot know in the comments!!