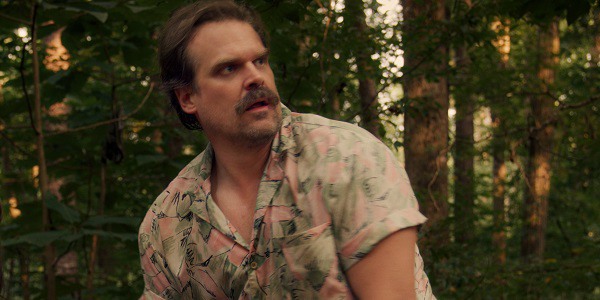 Stranger Things 3 ended with perhaps the most heartbreaking death of the entire series. Our favorite disgruntled and ill tempered, yet beautifully compassionate Jim Hopper met his demise. Or has he?

We didn’t really see his death, only that he was trapped in the middle of the Russian “key” machine as it exploded and literally vaporized everyone in sight. The rules for TV deaths state, though, that unless you see it happen, it probably didn’t happen. So we are going to hold onto hope for season 4.

Most importantly when it comes to clues about Hopper’s return; there was that post-credits scene which referenced “an American” locked up in a Russian prison. There are few options who this could be, but at the top of the list is Hopper. At least, that is the top of the wishing list.

David Harbour’s contract covers a fourth season as Hawkins’ police chief. According to TV Line’s Michael Ausiello, who wrote the following on his piece about the future of the Netflix smash hit:

“Harbour’s current contract carries him through a potential fourth season (and possibly beyond), but that doesn’t necessarily mean producers will pick up his Season 4 option. FWIW, the latest Vegas odds put the chances of him/her returning at duh.”

Now we know that there is certainly an option for Stranger Things to bring back our beloved police chief. But we are at the mercy of the series executives. However, we have a strong feeling that they will.

Millie Bobby Brown, who’s admitted to wrestling info about season 4 from creators the Duffers, has teased that Hop isn’t gone for good.

I just immediately wanted to put a camera on me and find the way I react and the way I reacted was pure devastation and sadness, and a distraught child that just lost her father or so she thinks.

Harbour himself hinted that there’s more from the character’s development and growth to come on the show.

In any case, David Harbour better be prepared for constant questioning about his role in Season 4, as we are just not prepared to see him go.

What do you think of this news? Do you think Hopper will be returning to us in Season 4 alive and well?