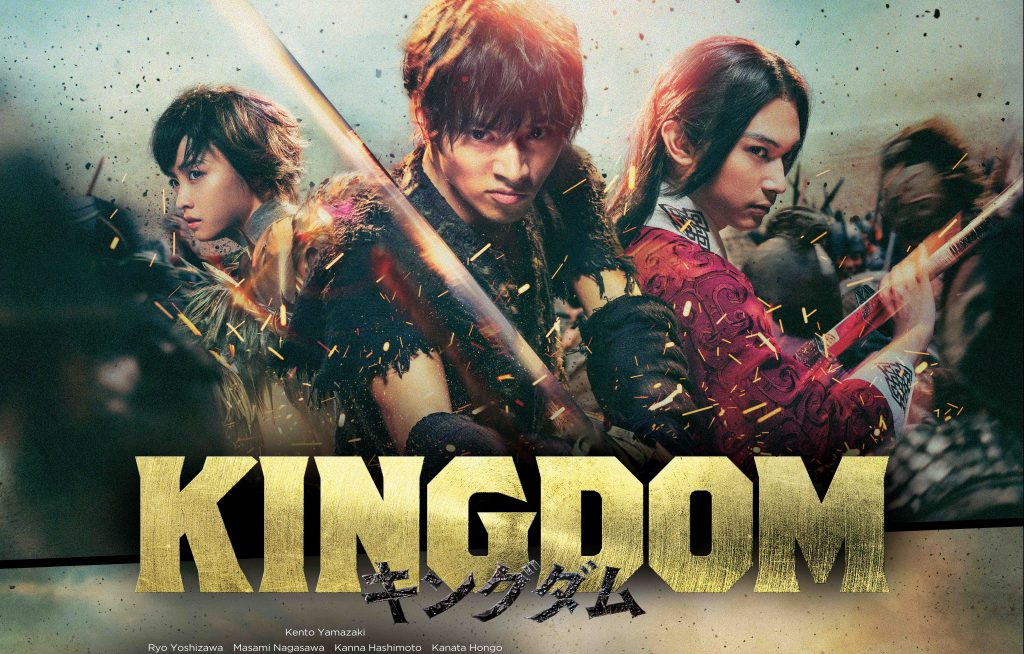 It’s not too often you when see an anime or manga be converted into a good live action movie. Just like video game live action movies the bar is set pretty low. But after watching Kingdom directed by Shinsuke Sato it broke all of those stereotypes. The movie does a fantastic job at staying true to the source material and adapting it well to a live action movie. It was nothing short of a great movie that is definitely worth a watch even if you’re unaware of Kingdom.

The movie takes place in a historical fiction time in China, and follows a boy named Xin played by Kento Yamazak an orphan who dreams of becoming the greatest general who ever lived. But as the movie progress his dream becomes a little more complicated. He soons finds himself in the middle war between two brothers fighting for the throne. Xin quickly alines himself with Yin Zheng played by Ryo Yoshizawa. A king who was betrayed by his younger brother for the throne.

The dynamic between Xin and Zheng was brilliant they both bounced off one another because of how opposite both characters were. It’s clear even from the very beginning that Xin is hot headed and very impulsive it’s one of his flaws, but at the same time one of his more admirable traits. While on the other hand Zheng is a lot more calm and collective. Throughout their adventure you see how both are depended one one another.

A great example is when they run into  Diao played by Kanna Hashimoto. Xin is clear on not trusting her because of a previous encounter. But as previously mentioned Zheng is always thinking two steps ahead. Hashimoto did a fantastic job at playing diao because she was the comedic relief. Multiple times throughout the movie tensions get extremely high and you’ll see her doing something so goofy it’ll make you feel better for that split moment. At first glance you wouldn’t think that a character such as herself would even play a vital role in the movie. But every batman does need there robin and she fantastic at assisting the team whenever she was needed the most. And it was hard not to fall in love with her character.

One character that’ll differently stand out from the crowd is Yang Duan He played by Masami Nagasawa. She plays as the leader of the mountain clan. Right off the bat when they first introduce her you can tell she’s a badass. Leading a tribe of people up deep in the mountains far away from everyone else. With her people backstory perhaps being one of the more depressing ones throughout the film. But that doesn’t stop her from leading her people into greatness. She was that perfect cherry on top in the final acts of the movie.

As mentioned before the movie does a great job at making this come to life. While watching this you can tell that the cast and crew where really passionate about this. While watching the fight scenes which were breathtaking they stay true source material. Every fight was greatly choreographed and got me more immersive than the last one. If it wasn’t with the sword to sword combat to the special effects added to showcase how powerful certain characters where it becomes hard to choose what was a favorite. Because both greatly together and it’s hard to picture it done any other way.

As mentioned before, it isn’t easy converting Animes/Mangas into live action movies. But they made it look like childsplay with this. It was a great movie from start to finish with a story that’ll keep you so immersed you’ll never want it to end. The cast did a breathtaking job at making me feel what they felt and sinking me into it. And everyone behind the scenes team did amazing with all the visual effects. Funimation did a really great with this movie and you should do yourself a favour and see it! It’s set to come out August 16th 2019.