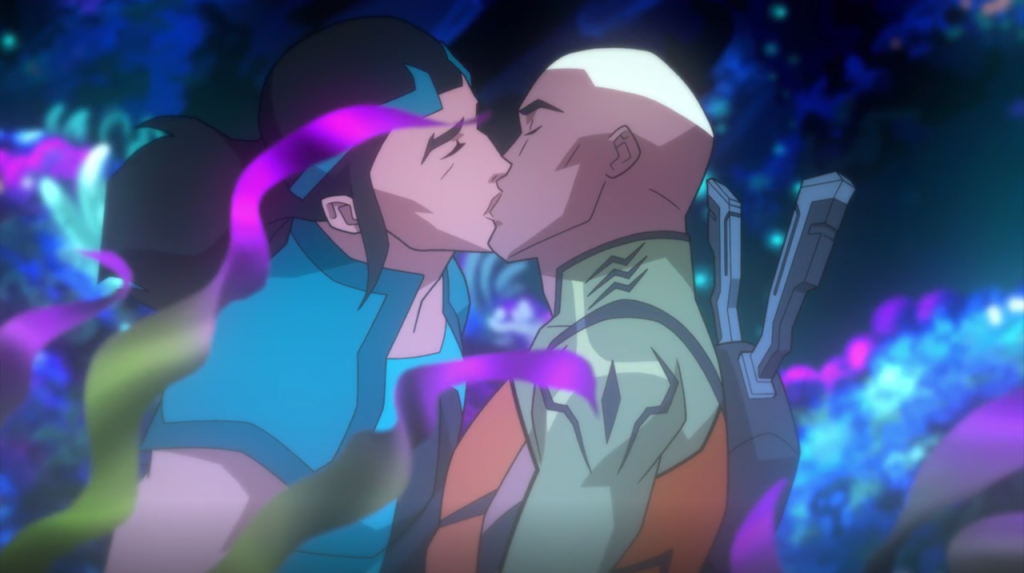 Many changes in the status quo were revealed in the first few episodes of YG Outsiders, one of them being that Kaldur’ahm has taken the mantle of Aquaman. With King Orim leaving the Justice League to Rule Atlantis full time.

While Wonder Woman Leads the league out in space, Kaldur Leads the league on earth. Within the recent episode of Outsiders, Aquaman takes a abducted meta teen to Atlantis due to her gills manifesting during the last episode.

While taking her to stay with his mother and father, King Orim and an unknown protege, whom later shares a kiss with Kaldur later in the episode.

A big part of Kaldur’s backstory involves his unrequited love with Aqua Girl ( Tula ) and her death. This, paired with the realization that the villainous Black Manta was his father, helped to legitimize his turn to the dark side. His eventual betrayal would strike a huge blow to the Light and the Alien Invasion, all taking place back in season 2.

Creator / writer of Young Justice Greg Weisman took to twitter to answer fan inqueres to the sexual identity of Kaldur’ahm.

While talks of inclusion and sexual identity have been up for debate, this character choice isn’t out of left field. While cries of “pandering to certain audiences may be made” the current version of Kaldur in the comics is an openly gay male.

What’s your take on this revelation ? Do you love it or hate it ? let us know in the comments down below