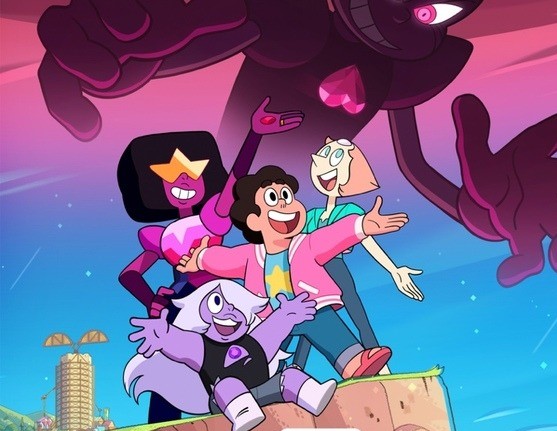 After Five seasons, Cartoon Network’s Steven Universe is having its first movie, scheduled to release Fall 2019.

The four main crystal Gems, Steven (Zach Callison), Garnet (Estelle), Pearl (Deedee Magno), and Amethyst (Michaela Dietz) , return in this film to defend Beach city and the earth from incoming threats. While no Solid information has been released, but the official logline is :

“Steven thinks his time defending the Earth is over, but when a new threat comes to Beach City, Steven faces his biggest challenge yet.”

Back in early june, The CN Youtube channel released a 30 second video proclaiming that the new movie is a musical.

With such little information being officially released, fan speculation has stirred after the release of the aforementioned poster.

Now this may seem to be something to scoff at, the development of stevens’ human physical body has been discussed before. Average human development was in question for the character, but the last acknowledgment of the topic ended on a positive note. This could possibly allude to a time jump from the previous season to the movie ?

The left is identified as being away from beach city , possibly at the barn. Here a giant tower, surrounded by several smaller buildings stand – possibly as home for all of the gems saved in the season five finale.

The temple front entrance , where steven has lived for most of his time as a Crystal Gem, has been renovated.

The season five finale had this wonderful yet awkward duality. On one hand, the major villains of the series have been defeated, with many of the plot threads being tied up.

But since everything has been wrapped up , where does the show and its characters go next ? Fans can only speculate on what challenges Steven and the Crystal Gems are going to face next, if any.

What is your opinion on the Teaser Poster ? Excited or Uninterested ? Let us know in the comments down below !