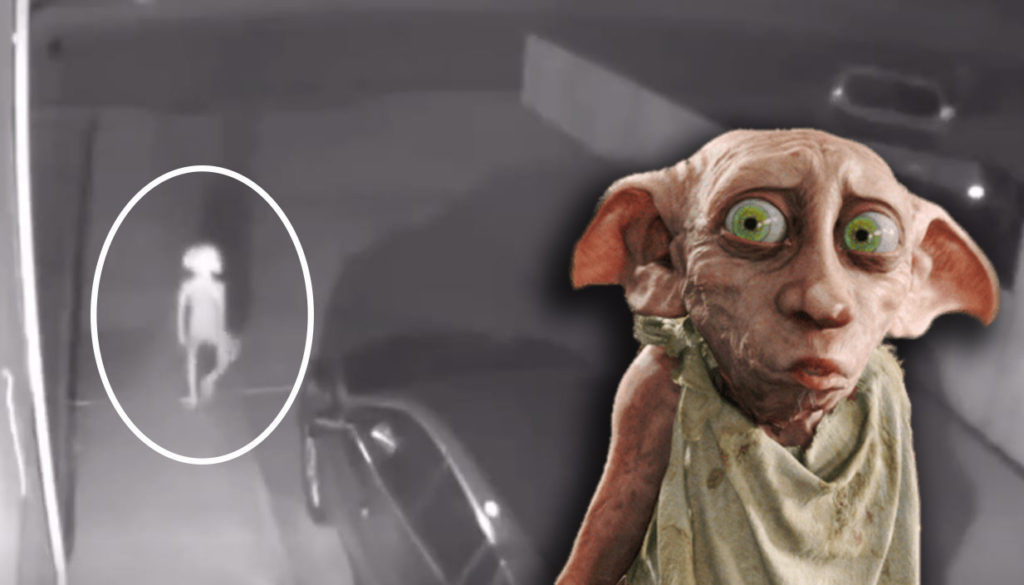 A woman online has posted what she says is security footage outside her home. There is a creature that we can see walking next to her car, do a sort of chicken dance and then keep walking. To the naked eye it appears that the creature resembles the iconic Dobby from Harry Potter. You can see it for yourself here.

” So I woke up Sunday morning and saw this on my camera and am trying to figure out…what the heck?? First I saw the shadow walking from my front door then I saw this thing….has anyone else seen this on their cameras?? The other two cameras didn’t pick it up for some reason. “

Well first of all Vivian… Burn it all down! Move! Get out of there! What is that even? But if that isn’t real then good job scaring the pants of thousands of people.

Now the thing about this while it is weird and it is kind of funny that so many people are freaking out about it, is it is probably fake. You can see in the video where there is a larger shadow and they seem to be letting something go right when “Dobby” takes a walk. So I would think that it is someone’s creation that is either mechanical or remote controlled and they were taking it out for a test run. The other thing that makes me weary is that there is audio at all on this security cam footage. It is illegal to record audio without consent and for that reason most security cameras do not have audio. Now it’s not impossible but it is something to consider.

That is how I rationalized it in my mind. However if you are of the mindset to believe that this is either in fact an alien or that the wizarding world is real then more power to you. Some of the best theories on the Harry Potter end of this were; Dobby after Harry gives him a sock, and a deleted scene after Dobby leaves Malfoy’s place to warn Harry.

What do you think of this weird footage? Tell us in the comments whether or not you think it’s real or fake!