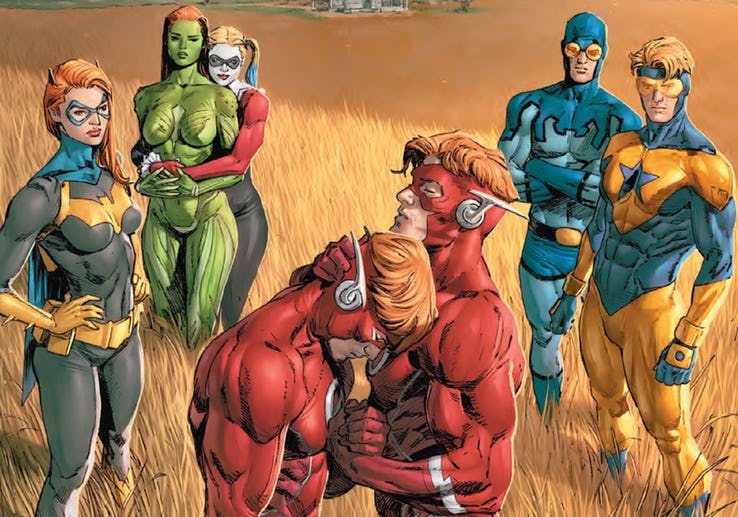 A Depressing slog and an Unsatisfying ending

The ending of any serialized work, is paramount. Regardless of the medium, if the conclusion to a work is less than the build-up then it becomes unsatisfying. When speaking on DC’s event, Heroes In Crisis , the sum of this stories parts have been uneven, disappointing and Depressing for the sake of pseudo drama . For this final issue of HIC, it exemplifies the best and worst of the series,. It isn’t necessarily a Good or Bad Finale,but it a realistic one.

Recap (if you don’t need this, skip this paragraph):

Sanctuary is a Mental Institution whose patients are specifically the superhero/villain community. The program is designed to be well hidden by giving the patients anonymity and a safe space to work on their issues(with individuals such as Arsenal Roy Harper, The Flash Wally West, Pamela Isley Poison Ivy etcetera being ‘treated” at the facility. When all of the patients of the facility are murdered, the Trinity and Flash investigate their two prime suspects: Harley Quinn and Booster Gold. Meanwhile, both these individuals believe they saw the other person commit the crime. eventually come together to figure out who’s really pulling the strings. During this, Lois Lane receives cryptic messages from sanctuary. Knowing the truth will come out eventually, she releases a report on the facility. In a PR move, Superman and Wonder Woman addresses the press to quell the concerns of the public. In issue eight we find out that Wally West, the Flash and one of the victims of the Sanctuary Attack,  lost control of the speed force due to this trauma and mental instability and accidentally killed all of the patients . Wanting to do right, he staged his death and tricked everyone into believing Harley and Booster did it, in order to buy himself some time to reveal all the information to the public (via Lois Lane). He creates a loop where he kills himself over and over again, that’s eventually stopped when Booster and Harley (aided by Batgirl and Blue Beetle) help convince himself that he has to face his issues and own his responsibilities.

This series had a very promising set up, where you could see out heroes deal with trauma and hopefully grow. Aside from the hollow, melodramatic attempts at character motivation and action, this book at least tackled the idea that if something is wrong, then you need to get help. It’s unfortunate that the book spent so much time misrepresenting characters and their struggles. Their characterization, that has been building up for years, seemed to of been ignored for the sake of telling a certain story. All in a ploy to sell a book that sells the idea of exploring trauma but gives you a murder mystery with an unsatisfying conclusion.

The Good: Clay Mann has been the main artist for most of the issues, and he’s done a fantastic job capturing the emotions in his characters, with expressions and movements that wonderfully display emotion. Tom King has a lot of great ideas but the execution has always been varied, with a real dissonance between what the writer wants to say and how the characters act. There are interview segments that are placed within each issue, that give Sanctuary patients the chance to talk through their issues and it gives an interesting perspective of the heroes and what troubles them.

The Bad: The entire concept really feels like its catered toward headlines and shockvalue, rather than telling a good story. While you can have it both ways, the attempts to display mental illness and how people deal with it came across as uninformed and rude. Many of the characters here have real issues, and although HIC gives us some time with them, it all loses weight because you know that they all die at the end. There’s no resolution, and if you keep reading about these characters trying to get better, it ruins any depth the story has when you realize that it all leads to nothing.

P.s.There’s also no real licensed therapist in Sanctuary, so that’s a big problem.

The Ugly: Hopelessness. The last issues ends with a speech from West where he says,

“… Hope isn’t denying who you are or what you’ve been though… Hope is knowing what you carry with you, how heavy is the load. How easy it’d be to stay still to do nothing. To yield to the weight and fall to the mud.  And yet despite that burden, or maybe because of it, you’re still running.”

This is framed as the the main message of the event. ou may feel like you’re going to fall apart, as long and keep on going and hope for a better tomorrow, then you can get through this. This is not what I took away from this event at all. And that is the worst part. The tease of a resolution that has fallen flat. When you depict a story about mental health, there has to be something the audience/ characters can take away and learn from. They can be beaten down yes, but if you don’t have real solid change and some sort of positivity come out of it, then its a disservice to the characters struggles and the the readers. Aside from Wally killing and bunch of heroes, he doesn’t learn anything new, nor is does anyone seem to impactfully grow. If anything he’s in a similar state as he was before all this happened. We don’t find out is he’s going somewhere for help, or how the trinity (+) feels about it, all we’re left with is a afterthought speech about hope and a panel showing Wally in jail.

( P.S. If he thought he was alone before, sitting in a cell is not going to help at all.)

Of course, at the end of the day, it’s up to you, my dear reader, to decide how you feel. So if you agree or disagree, try the series out yourself. But I now warn you with this;

In the real world, we don’t normally get a happy ending, or a sad one – it usually is grey. This middle of the road ending leaves us with regret and promises of the future, and that is the realistic ending Heroes In Crisis, gives its audience.