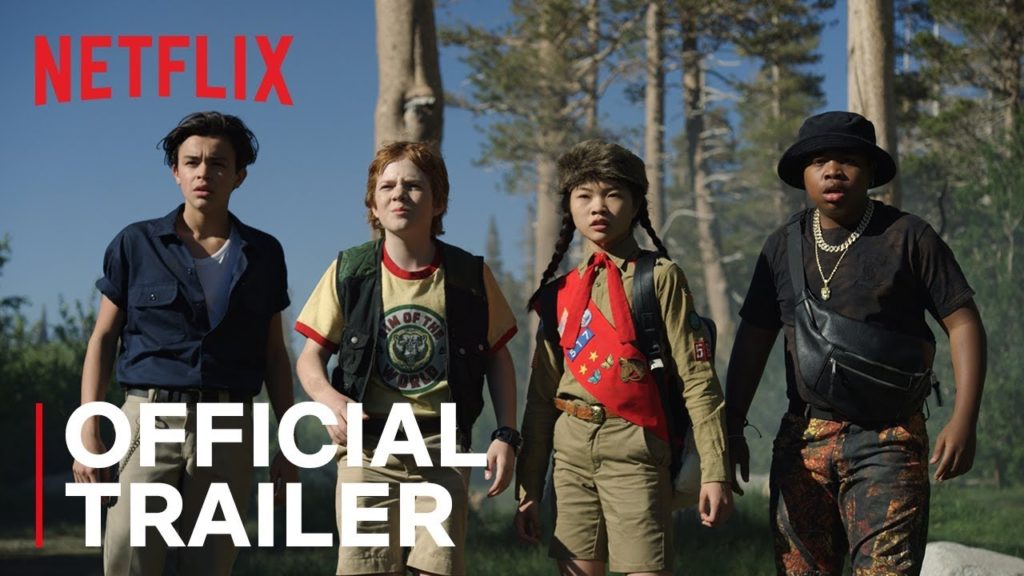 You know those movies Thor and X-Men: First Class? Well they were both written by Zack Stentz along with many other films and television episodes I really dig. Zack also penned the new movie Rim of the World, which is now streaming on Netflix! The film follows four kids at summer camp who get swept up in a sci-fi adventure when aliens attack. I suggest you check out the trailer above before digging into the interview below where Zack tells us what went into creating this new film.

Ronnie: Did you go to summer camp as a kid?

Zack: I went to Boy Scout camp for a couple of years and science camp for one, but I really tried to base the movie more on my own kids’ experiences of summer camp. They go to an actual camp up in the San Bernardino mountains east of LA that has electives like water skiing, LARPing and stuntman training!

Ronnie: Were there particular movies or TV shows that made you want to go to camp? (Mine was Heavyweights)

Zack: I’m more of the Meatballs generation, but I never had a counselor as chill as Bill Murray, unfortunately.

Ronnie: What activities you do at camp?

Zack: Knot tying. A WHOLE LOT of knot tying. Also, some orienteering and astronomy, which was a lot more interesting.

Ronnie: What do you think makes summer camps so special?

Zack: Summer camp is special because it’s the first place a lot of kids get a taste of independence from their parents and other adults, but without all of those pesky things like responsibilities, jobs, and paying bills…

Ronnie: What movies and such helped inspire this Rim of the World?

Zack: The biggest influences are clearly the classic Amblin films of the 1980s like E.T. and The Goonies, and the related “kids on a journey learning about themselves” classic Stand By Me. In terms of the alien invasion part of the film, the biggest influence was probably Spielberg’s War of the Worlds, because I tried to give a ground-level view of the invasion that reflected a lot of confusion and not knowing what was going on.

Ronnie: Do you think there’s a possibility of a Bird Box-like challenge coming out of the film? If so, any tips on how folks can participate safely? #RimoftheWorldChallenge

Zack: Oh my, I hadn’t even thought of that. Without giving away too many spoilers, I hope none of the challenges involve jumping into the septic tank of an outhouse, or if they do, that everyone gets their tetanus shots up to date first!

Ronnie: How did this script get developed? You pitch it around or have a completed script?

Zack: Rim of the World was an original idea of mine that I wrote “on spec” (for free, on my own time) and then brought to McG’s head of development Mary Viola. She was the one who set it up at Netflix, and at one point McG, [director of Rim of the World], and his talented young associate Jimmy Warden did their own pass on the script (many of the funniest jokes in particular are theirs) before I came back and was on set every day doing rewrites with McG and Jimmy. This is the most involved I’ve been in the production of one of my projects ever.

Ronnie: I love movies where society breaks down, like alien invasions: What is your “zombie plan”?

Zack: In Los Angeles, the most zombie-proof locations are…movie studios! They’re surrounded by high walls and have plenty of food, supplies, and places to sleep inside. So if the zombie apocalypse happens, the family and I are headed straight to the Warner lot to hole up with the tour guides, cafeteria workers, and Greg Berlanti to fight off the undead hordes together.

Damn! That is a thorough zombie plan. (I might have to adjust my own with this new knowledge). As you can see, Zack Stentz an expert on combating the paranormal, so check out Rim of the World this long weekend. If your picnic gets rained out, move it inside and pull this up on Netflix. I have a hunch this could be the next Bird Box or Stranger Things.