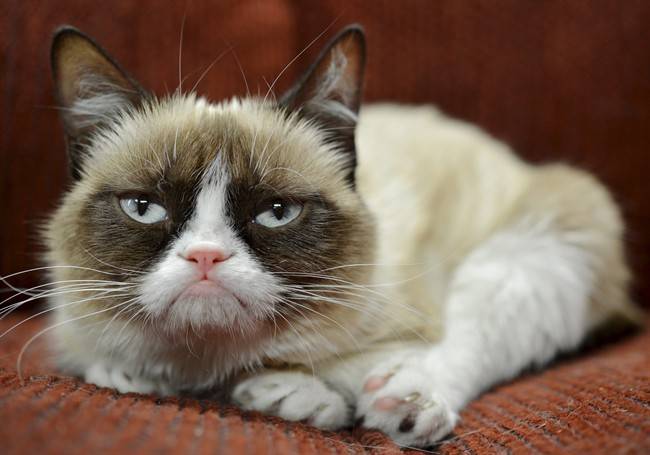 Grumpy Cat Has Passed Away

Tardar Sauce, known to the world as Grumpy Cat, passed away on May 14 at age seven. She became famous for her grouchy facial appearance, which was due to an underbite and feline dwarfism. Grumpy Cat was a mixed breed, although her owners were unsure of the specific mix. She passed away due to complications of a urinary tract infection.

“Grumpy Cat” became an Internet sensation when the brother of her owner posted pics of her on Reddit in September 2012. The photos Imgur image had 1,030,000 views in its first 48 hours while a video posted to YouTube the same day had millions of views. The video was posted to refute claims that the cat’s expression had been photoshopped in the original picture. However, numerous photoshopped variations of the cat’s photo spread with various humorous sayings added. Many fans stood in line for hours to have a picture with Grumpy Cat when she appeared at the South by Southwest Interactive (SXSW) festival in Austin, Texas. Grumpy Cat’s face was named Meme of the Year at the 2013 Webby Awards.

Grumpy Cat became famous with television appearances on several shows including Today and Good Morning America as well as a wide range of merchandise featuring her image. She even starred in a 2014 Lifetime Christmas Movie Grumpy Cat’s Worst Christmas Ever. At the time of her death, she had millions of followers on Twitter, Instagram, and Facebook.

Farewell Tardar Sauce, may you be much less grumpy in heaven.