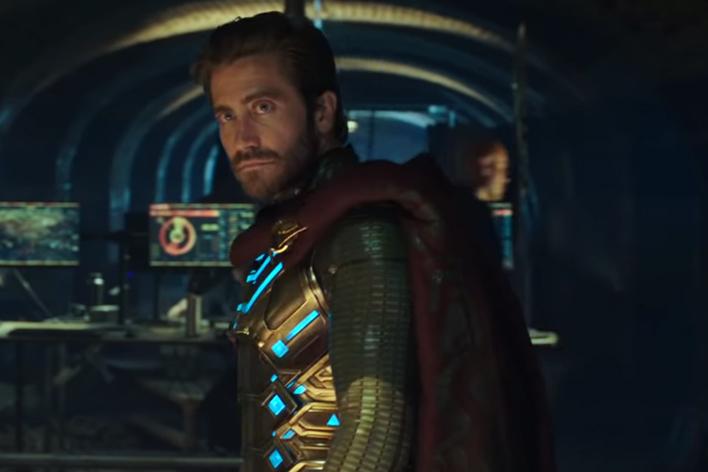 The new Spider-Man: Far from Home trailer is out and loaded with Endgame spoilers (grab your tissues). But what may be the most interesting aspect of the trailer is a tidbit about Mysterio (Jake Gyllenhaal). According to the trailer, the Quentin Beck/Mysterio in Far From Home is really far from home – he’s from an alternate universe! Nick Fury indicates that the snap did more than just decimate the universe’s population, it also “tore a hole in our dimension.” Given that there were actually four snaps in Infinity War and Endgame, and that the second snap was Thanos destroying the infinity stones, who knows what kind of cosmic effect that had?

In what we have seen of the movie so far, Mysterio is portrayed as a good guy who is helping Nick Fury and S.H.I.E.L.D. deal with some elemental problems. He will potentially have help from Spider-Man in dealing with those problems, and says in the trailer “we could use someone like you on my world.”

But according to comic lore, Mysterio is a villain who uses illusions to perpetrate crimes. Mysterio was created by Stan Lee and Steve Ditko and was introduced in The Amazing Spider-Man issue #13 (1964). Quentin Beck was a former special effects artist and stuntman who became a master of illusion when he turned to supervillainy. Mysterio became a member of the Sinister Six, which also included Vulture. Michael Keaton was rumored to be reprising his role from Homecoming as Adrian Toomes/Vulture in Far From Home, but that rumor has been debunked. Will we find out that Far From Home‘s Mysterio is really a wolf in sheep’s clothing? Is he in fact behind the elemental attacks? If so, what is his ultimate goal? Maybe the whole multiverse thing is something he made up for…reasons?

One of the most iconic looks for Mysterio is the giant fishbowl helmet he wears, which actually doesn’t look too silly in the trailers. In fact, what little we have seen of Mysterio so far has been pretty cool and I wouldn’t mind seeing him join the ranks of MCU heros. Or if we are going to open up the idea of a multiverse in the MCU live-action films as well as in the Into the Spider-Verse animated movies, maybe we can have a hero Mysterio and an alternate universe villain Mysterio. Sort of a good twin/evil twin situation that gives you double the fun and satisfies everyone.

Probably not, but here’s hoping. We will have to wait until July 2 to find out what is real and what just might be a deceptive illusion when Far From Home debuts.