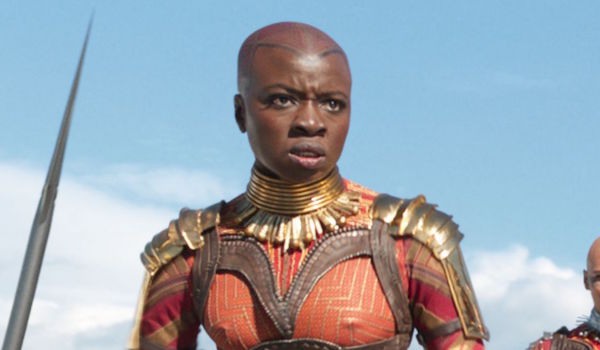 “Endgame” Poster Revised Over the Positioning of Danai Gurira’s Name

In addition to the latest trailer, the theatrical poster for Avengers: Endgame debuted March 14.

The poster features most of the Avengers who survived the devastation against a backdrop that has a looming Thanos silhouette. Iron Man and Captain America are the most prominent figures, but also pictured are Thor, Bruce Banner, Ant-Man, War Machine, Black Widow, Nebula, newcomer Captain Marvel, Okoye, Rocket Racoon, and Hawkeye (yeah he made it onto this poster!)

Of course the poster, like the trailer, has spawned a lot of fan theories even with so little information to work with. Is Rocket wearing Bucky’s goggles (wouldn’t they be a bit big for him? He didn’t get the arm but he got the eyewear? Is Spider-man hinted at in the photo? (One fan joked that the dust floating around was the remnants of Peter Parker.)

But the thing that attracted the most attention was the lack of Danai Gurira’s name amongst the other top-billed cast featured on the poster. She was the only pictured actor who wasn’t credited at the top, her name only appeared in the secondary credits at the bottom. Fans were quick to voice their ire over the omission, and fortunately, Marvel was quick to respond by releasing an updated poster that includes her in the top credits with an apologetic admission “She should have been there all this time.”

What role will Okoye play in Endgame? We don’t know, although with Black Panther lost to the snap, perhaps she will step up to fill that void.

We’ll have to wait until April 26 to see.