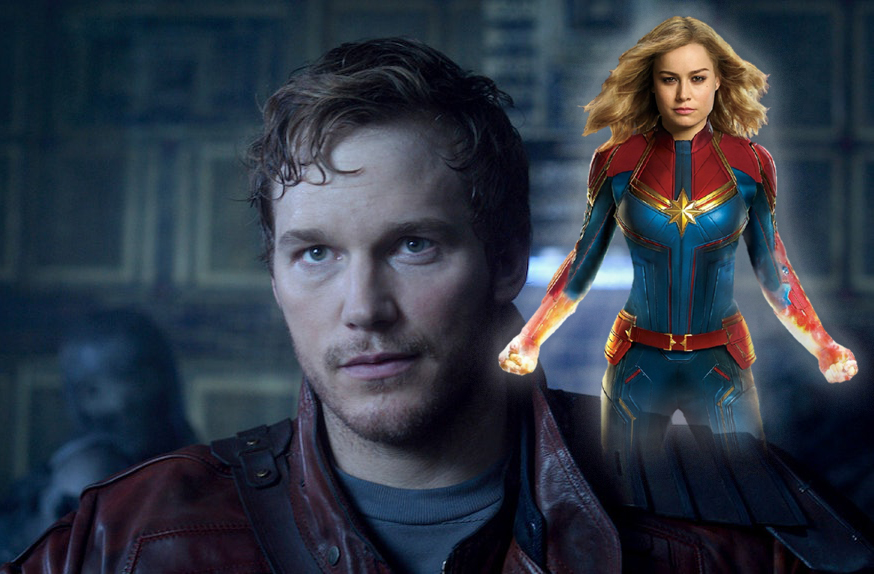 Remember in Guardians of the Galaxy when Starlord mentions he dated a Kree girl? The fling was brief and she tried to rip out his throat when she caught him with an A’askavariian. Well there is a chance, and a pretty good one at that, that the Kree girl in question is Captain Marvel.

Jon Negroni on twitter points out that there is about an 83% chance that Carol Danvers is the woman in question. And if you think about it I don’t remember seeing that many other Kree women on Hala. So now the question that hangs in the air is, Has Starlord Hooked up with Captain Marvel??

We know from Captain Marvel that she started living on Hala with the Kree after she crashed on earth and “died”. What we don’t know is what kind of life she lived there. We know she trained, we know she had nightmares, but did she have time for any “extracurricular activities”?

When Starlord tells Drax about the A’askavariian girl and the Kree girl it was to save Gamora from being murdered by Drax. It was a great insight into what kind of stories Starlord has up his sleeves.

Not only that but the timelines kind of match up. Starlord was taken by Yondu and abducted in 1988. He was a kid then but we aren’t really sure how space time works. We know that Captain Marvel was set sometime in the Mid 90’s and she was abducted six years before that and doesn’t age. So there was a significant amount of time she was on Hala that she could have interacted with the dashing Starlord.

This could connect the MCU even further for Avengers Endgame. People are waiting for the moment when Starlord first sets eyes on Captain Marvel in the film. Hopefully there will be a funny moment of shock on his face as Chris Pratt is an amazing comedian.

What do you think of this theory? Does it make sense for you? Tell us in the comments!