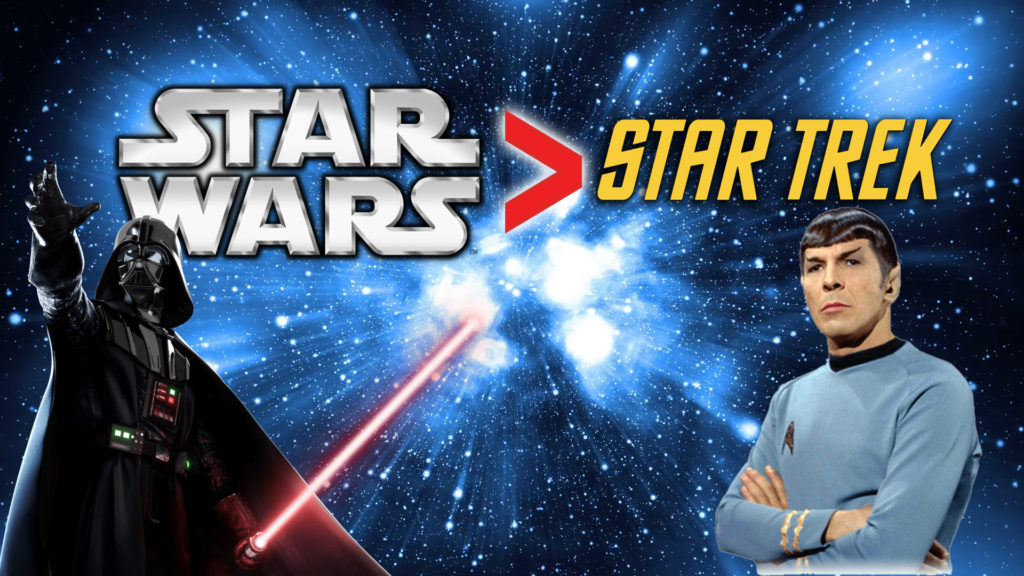 Opinion: Why ‘Star Wars’ is STILL Better Than ‘Star Trek’

This has been an age-old discussion in the nerd community and I’ve personally seen it get tense because of the passion between the two groups. With the recent ‘shelving’ of Star Trek 4, fans have been disgruntled. Does that mean Star Trek isn’t a viable franchise? I don’t think so, even though I’ve been trolling Star Trek forums (it’s fun), I think Star Trek holds a special place in the sci-fi landscape.

A few weeks I got a chance to sit down with our Nerdbot commander-in-chief, Elvin, who is an avid Star Trek fan and it got me thinking. I’ve been a hardcore Star Wars fan since I was 6 years old, for a long time it was Star Wars or die attitude, but after watching a season with Elvin, I was entertained, surprisingly. I remember watching the syndicated Star Trek shows and the movies when I was young and not being a fan. Star Trek as always been “slow” to me. What I mean by that is when it comes to action packed space battles and laser-swords whizzing everywhere, Star Trek didn’t have that. What it does have is a Twilight Zone feel during every episode, which was very popular during it’s release in 1966. Arguably, Star Trek paved the way for sci-fi shows and movies, so respect is given, and Gene Roddenberry is godfather to the genre. So the question still remains…is it better than Star Wars?

As much as I was entertained by Star Trek it never puts me in an excited mood like Star Wars. It doesn’t hit that feeling I got of sci-fi fantasy I had when I was young. If we were to talk about just numbers as far as merchandise, ticket sales, global popularity then Star Wars would win hands down. But let’s keep that out of the discussion for now, let’s talk about plot, characters, overall entertainment. The Star Wars universe has the most diverse set of characters among the sci-fi libraries. One of the reasons why Star Wars is popular is because of the cliche battle between dark and light, bad versus evil, the lineage of a family that saves the universe over and over. Star Wars has Han Solo. Enough said. Space battles are way more exciting, X-wings, Y-wings. A-wings, alphabet-wings we have ’em all!!!!

Let’s go deeper, a sort of “what if” scenario

If Star Trek was taken over by Disney? Could they bring in as much popularity to the franchise? I think so. I enjoyed the JJ Abrams reboots. Much more action-packed, better visuals but it’s not enough.

Actual stats: CNBC’s ‘On the Money’ show took a trip to the Vegas Con to see just how much money there was in Star Trek and they estimated that the franchise has been worth $4 Billion for Paramount. In other words, Star Trek is a valuable franchise for everyone connected with it – including outside products and brands.

Numbers don’t lie people, and with half the catalog that Star Trek has when it comes to TV shows and movies it’s hard to deny who’s better.

With all that being said, I can’t deny that both franchises have made an undeniable impact in nerd culture, and at the end of the day we all win because these and other franchises will be around for a very long time.

What’s your opinion on it? Are you a Jedi or a Klingon? Argue for or against either in the comments!!!!

Speaking of arguing for a side, make sure you tune into the the Nerdbot Facebook page tonight for the first LIVE broadcast of What’s Better with Stephanie Sandmeier! First Topic will be MARVEL VS. DC. Get ready for some heated debates!