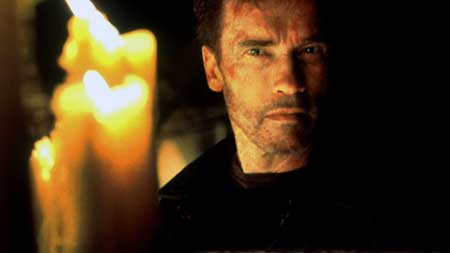 As we approach the end of the holidays, so begins the final countdown to the new year. This year was particularly rife with debates over what is makes or doesn’t make a good Christmas movie. Thankfully that debate is pretty much over and we can get down to what matters now, what makes a good New Year’s Eve/Day movie? What best gets us into the spirit of annual renewal, where we can make our grand resolutions that end up failing two weeks into the year.

I think that prospect of eventual failure is best exemplified by a movie that also reached for the stars and crashed miserably. One that wanted to be tied to a particular cultural moment and had millions of dollars pumped into its budget to reflect the anxieties of the end of the 20th century. One that wanted to feed off the fears everyone was having that the year 2000 would bring ultimate technological failure. And despite these ambitions, ends up falling flat on its face and was forgotten by January 2nd. That film is the Arnold Schwarzenegger “classic”, End of Days.

Taking place on December 31st, 1999, this dour mess of a movie where Satan comes to earth to take over the world as foretold by overworked screenwriters. He must accomplish this by finding and bumping uglies with his destined bride and only suicidal cop Schwarzeneggar can stop him. His plan also involves a whole slew of unnecessary contrivances and detours involving evil cults, scary homeless people, and blowing up restaurants for no good reason.

It has a Satan who can absorb bullets and do all number of absurdly powerful things yet also decides he has time to crucify people on ceilings for no reason other than its so “cool and edgy man”. The movie doesn’t know if wants to be a gritty horror movie or a goofy action movie where people’s heads get punched in at random. Which makes a perfect movie to remind yourself that life is absurd, with wild mood swings and full of people who had lousy judgement, including the people who made this.

For some of our younger readers, End of Days can provide a visual time capsule for the way that the culture of the time looked forward to the year 2000. By the end of the 90s we had sat through grunge, David Fincher, and just a general feeling of unease over the new millenium. The movie reflects that perfectly with a movie that is f*** ugly where everyone is bathed in shadows and you have no real clue what’s going on. Also distracting is how desperate this movie wants to be in the cool department.

Schwarzenegger plays a guy named Jericho Cane, which is one of the best worst names in any action movie. We know he doesn’t care about life because he starts the movie about to drink a smoothie made of leftovers and booze. Only a guy like Arnold would portray rock bottom as having an absurdly poor diet plan. He must protect a woman named Christine York who is the Dark Lord’s betrothed and who is hard to find despite her name being a literal clue to her location. Christine York…Christ In New York? Get it? Huh? Huh? Ahh nevermind.

This movie has one of the worst dark lords in cinema, played by Gabriel Byrne. He is the all powerful avatar of evil, but still has to possess the body of a rich guy to get a decent limo in New York. This Satan is also one of the more easily distracted Satans in movies, where he constantly has to get into outside hijinks when he should be focusing on the fact that he has mere days to fulfill a plan thousands of years in the making. Why worry about your aeon old plans when you can distract a kid on a skateboard so he gets run over by traffic? Or have a threesome with the family of a cult member for no reason at all while the sultry vocals of Fred Durst (its 1999 after all) play in the background. Why does he even need a cult in this movie? They are incompetent throughout and constantly screw up his plans when he could basically destroy everyone around him with his little finger? Byrne does not even look like he’s having any fun in the role, simply letting the special effects take over while he stands there looking bored and sad.

It would be worth it all if this movie was fun in a bad way, which its not. The movie turns the normally entertaining Schwarzenegger and turns him into a mopey sad boy, and begrudgingly arms himself with grenade launchers to battle hell spawn. A movie this absurd needs some kind of fun or levity but has no idea how to be funny. This movies idea of a joke is having Satan feel up or coerce women into having sex with them before murdering them in absurd ways. Fun! It also tries to break the fourth wall with Cane being told by a priest that the prophecy for the end times would occur at exactly midnight, with Cain quipping “is that eastern time?” Hey, guys, just because you point out how dumb it is that a prophecy would need to be specific to a time zone doesn’t make you clever, it just helps underline how lazy you are.

It’s hard to recommend this as anything other than a morbid curiosity or hangover cure. Which also helps keep up the appropriate New Years mood quite nicely. We all plan our next year as THE year. The one where we finally make good on our diet or our spending habits. Yet much like old Jericho Cane, those attempts at doing better lead only to getting beat up constantly and being overwhelmed by stupid demons that only aspire to ruin our day. By being both time period appropriate and certainly mood appropriate, End of Days is the perfect way to deflate any high hopes you might have for the new year. But at least this movie ends with a giant flaming Satan demon puppet, so at least it has that on your lame New Year’s Day party plans.

What movie do you watch to get your New Year started? Tell us in the comments!