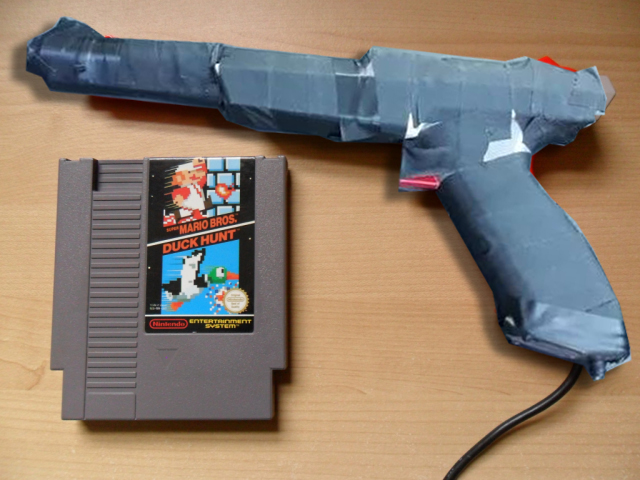 If you are a fan of shows like World’s Dumbest Criminals boy do we have a treat for you. This week it was reported that a man in Hermosillo, Mexico tried to rob a bank teller with a NES Zapper covered in duct tape. The NES Zapper being popular in the 80’s for playing the game Duck Hunt.

Look at that tight tape work! Could fool anyone! Well fortunately not the cops as they saw right through this fancy taped up gun. I mean he could have tried a little harder to cover up the red handle.. The man was apprehended and is now in custody being investigated for 15 other robberies. Fifteen robberies that I hope weren’t all executed with this gun, how embarrassing.

The Microsoft translation for the tweet is this ” Elements of @Policia_HMO stopped a few minutes ago to a person who had just committed a robbery to Banamex of Plaza Girasole. At the time of the arrest he was found a toy gun wrapped with insulating tape and a sports cap used in the robbery. “

So yeah, it fooled the tellers but not the cops. If I were in the tellers position I would have handed over the money too. Better to not chance my life on the crazy man with a Nintendo gun. I would have also recognized it but you know heat of the moment and all that.

Above you can see a reenactment of the crime.. it’s Hogan’s Heroes, but who knows it could have been where he practiced with the tape gun..

What could have fooled the cops? Maybe if he went all out and bought a Super Scope or a Nerf Gun and painted it real fancy. Maybe a highlighter or a finger in a pocket. I think even a blunt object or crazy yelling may have been more threatening than this laughable attempt at threatening gun.

What do you think of this? Was this a smart idea or a really really dumb one? Tell us in the comments!