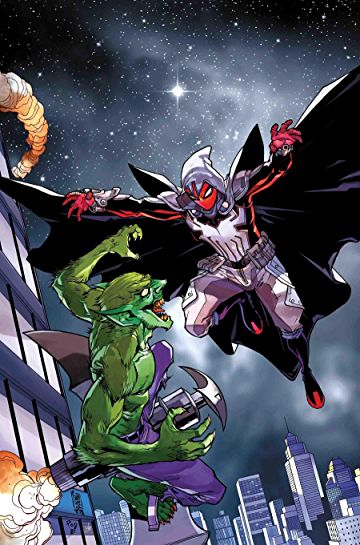 Round three has come and Marvel does it again with another character mashup and this time it’s Spider-Man and…. Moon Knight??

Arach-Knight doesn’t pull the punches in the dark and supernatural. Our hero, Peter Parker, has his origin changed up a little bit with a Batman-esque type feel as both his Aunt May and Uncle Ben our murdered in central park on their way home from the museum by an actual Green Goblin, fur and all.

Peter is left for dead when a talking spider bites him, saving his life and in turn feeling his head full of different voices and breaking his mind just a little much like the hero Moon Knight.

Years later Peter is a genius billionaire running his own company alongside his best friend Harry, also his crime fighting partner/driver and his girlfriend Mary-Jane. As the Arach-Knight, Peter has all the same powers as Spider-Man except with a much cooler suit and a few voices in his head to deal with.

With a plot twist at the end I didn’t see coming and an interesting origin story that goes into detail and makes us feel for our hero will cause me to come back to the final issue later this month. Be sure to check out these Marvel mashup’s as more are to be released before the year is up and let us know what you think!

What do you think of this latest mashup? Let Nerdbot know in the comments!