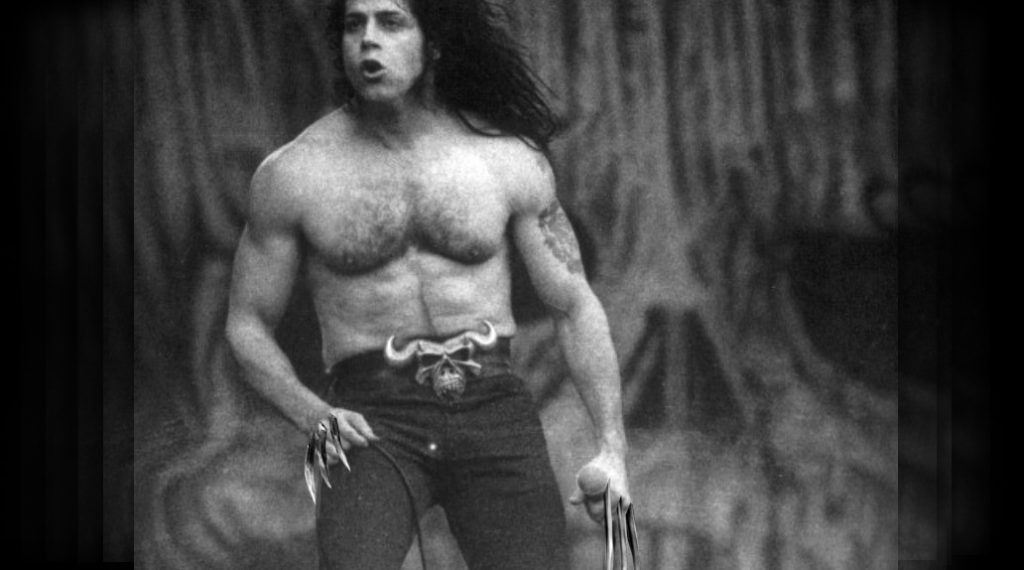 The 9 Wolverines Ranked On A Scale Of Danzig

This is a “Nerd Voices” contributing piece from Nerdbot reader Aaron Russell. Aaron is staying keeping fresh on Twitter. He also has a website devoted to his Photoshop hilarity.

Now that the Hugh Jackman era of Wolverine is almost, assuredly, most likely, probably, definitely done, I thought it would be a great time to go back through his nine cinematic appearances and rate them on swoleness, according to the Danzig scale. “Who’s Danzig?” you ask. I would say go talk to your parents or older siblings, my young friend. But if you’re not speaking to those posers at the moment, Glenn Danzig was the founding member of The Misfits, Samhain, and many other musical incarnations. Google it.

As well as being a rock legend, Danzig might have been mistaken for a Wolverine clone back in the 80s and 90s. Aside from his perfect physique and chestal hair, he stood a colossal 5’3” tall. Sound like anyone you know? But don’t take my word for it, take 20th Century Fox’s, who actively tried to cast him as Logan in their 2000 blockbuster, X-Men. But due to scheduling conflicts, he was unable to do it.

Unfortunately for Danzig, but fortunately for a relatively unknown actor, Hugh Jackman got the role, and the rest is history. But in the rock god’s honor, let’s rank all nine of Jackman’s outings as the clawed berserker on the Danzig scale, where 1 Danzig is the least swole and 5 Danzigs is the most.

At the bottom of the list, we ironically find his first performance. What muscled him into our lives, hearts, and loins was his least swole performance. To be fair, this movie hails from a time when most actors acquired their superhero physiques from latex suits molded into muscle shapes, kind of like the McRib but in reverse. I’m sure Hugh did a few squats in prep for his debut, but his natural form showcases here.

1 Danzig. Like I said, Jackman is naturally tone, but by today’s standards, he looks like a couple benders away from dad bod. 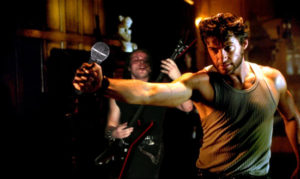 After the success of the first movie, 20th Century Fox saw they had a bankable, breakout star on their hands, and thus began their escalating game of Jack the Jackman. Again, remember this was before comic book movie stars were locked in a room with a cross-fit trainer for 6 months, fed kale and raw chicken breasts nine times a day, until they finally emerged into the daylight swole beyond belief. Hugh upped his game for this sophomore outing by adding some reps and crunches to his squat routine.

1 ½ Danzigs. Still early in his career, there was plenty more time to get diesel. 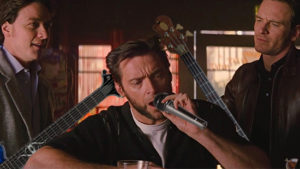 Jackman’s cameo in X-Men: First Class earns it 7th place by default. We know he was chiseled for X-Men roles before and after this, but his signature white tank-top or bare-chestedness are nowhere to be found. I can’t see him training for months for this one minute bit part, but he’s pretty dedicated about Wolverine, so maybe he did. But unfortunately, without tickets to the gun show, this one gets placed lower.

2 Danzigs. Out of courtesy, I’m giving him 2, but I’m dying to know if there’s still a six-pack under that bar as well as on top of it. 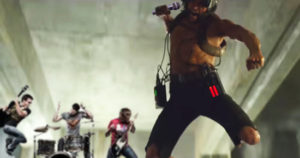 Coming in at #6 is Hugh’s second bit part in the X-Men series. People were still unsure if they wanted to invest in an X-Men movie, sans Wolverine. First Class got by on being fresh, original, and sans Bryan Singer. Days of Future Past cheated and brought Wolvie back bigtime. But people were worried about Apocalypse, until they saw the obligatory *snikt* in the first trailer. Yes, those glorious pecks were back to bend continuity and pump our expectations. A retelling of Weapon X’s birth (suck it X-Men Origins: Wolverine) saw him horribly slaying many nameless, faceless soldiers, probably family men with young children, thus freeing our young X-Men from a government facility. Since this was his second to last appearance as Wolverine, I’m not sure if he Creatined as much as his previous roles, but we could still tell from the fast-paced action he was manimal enough.

2 ½ Danzigs. With the entire Weapon X gear strapped to him, and getting up in years, Jackman was allowed to skip leg day on this one. This was full-on berserker mode, and therefore the best 5 minutes of the movie.

Logan is a testament to this man’s body. Imagine crunching for 17 years straight to maintain Wolverine abs and what that does to your system. Unsurprisingly, no effects were used to make Jackman look old, scarred and broke down. That’s just what he looks like in between training regiments. The movie is a perfect metaphor for what Jackman goes through after each X-Men movie is done filming. That tiredness is real. They started shooting Logan as soon as Apocalypse wrapped. But even stumbling around, he’s still one swole, swaggery beast.

3 Danzigs. His best performance as the character, Jackman’s aging, sinewy-stout Logan well-earned these 3 Danzigs. Here’s hoping this was just the start of a new trilogy and Old Man Logan and Really Old Man Logan are yet to come. 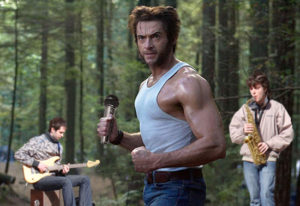 Inarguably one of the worst X-Men movies, but we’re reaching peak Wolverine swole now. He’s practically ripped…out of the comics. Hugh is becoming the model that near-future comic book movie universes will base their characters on: a great actor who’s diesel beyond belief. Jackman proved you could take a great actor and put him, or her, through the roid grinder and pop out a swole son, or daughter, of a bitch in just months. And all they had to do was give up their normal lives, favorite foods, time with family, other projects, and sleep to make pieces of art like The Last Stand. Win, win!

3 3/4 Danzigs. Jackman must have taken a vacation in Swollberg between X2 and this one, because he’s shredded like wheat. 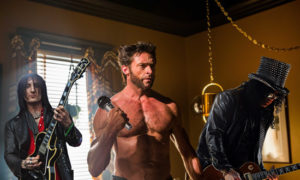 I touched on this earlier, but X-Men was in a quandary. It had just gone through a soft reboot with First Class and seemed to be doing ok, but the lingering question remained: What’s an X-Men movie without its most popular and fibrous X-Man? First Class dealt with it by being good. Then Bryan Singer returned, but he had no idea how make a movie without Meat Mountain, so he robbed Ellen Page’s Kitty Pryde of a time-traveling adventure and made Wolvie the star yet again. DoFP purists didn’t like Singer’s remolding of the popular comic storyline, but given the mold of the man that took her place, it was hard for them to complain.

4 Danzigs. At this point, body fat had developed an allergy to Hugh Jackman. It came down with this condition during the filming of The Wolverine. And speaking of… 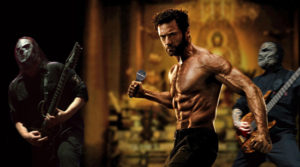 If you wanted to send a letter to Hugh Jackman’s body fat, that ship sailed 0% ago. He’s a little older, a little leaner, but he’s still the perfect swoldier. Every shirtless scene in The Wolverine is a Men’s Health magazine cover waiting to happen. He’s the conductor of the Swole Train, and he’s taking us all on a ride. Someone call Jurassic Park, because the swolesaurus just busted out of its cage…I…what was I talking about? Oh, yeah. The movie was pretty ok, I guess.

4 ½ Danzigs. Director James Mangold knew he struck man-gold with Jackman, and they attempted to right all the wrongs of X-Men Origins: Wolverine. But there was one un-wrong they could never re-right… 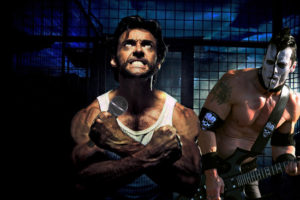 10 years ago, there was a Wolverine so chiseled, so brolic, so buff daddy, it naturally rose to the top. Origins’ Wolverine was the perfect combination of cut and loaded. Born on Man Mountain, raised in a brickhouse, this man was fed a constant diet of Jacked Daniels and exhumed mammoths. Say what you will about the movie, there’s no denying the most swole Wolverine hails from his schlockiest outing. This is his curse. This is his blessing.