There is a certain beauty in simplicity.  Not every single thing has to be some layered mystery wrapped inside a riddle, wrapped in an enigma.

Which brings me to our weekly coverage of various series from our friends over at Aspen Comics, and now the new issue of Dellec is upon us. 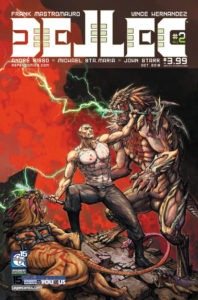 I think you pronounce it Del-lek?

Remember what I said about simplicity.  The second installment, titled “It is in dying that we awake to eternal life”, while having a super long name, only follows a couple of storylines as we get acquainted with our fresh off the resurrection protagonist Mr. Dellec.  There’s no lake of character complexity to swim through, but you get development.  Action fills the frames on the pages you’d normally see devoted to semi-relevant drawn out monologues.  Put these critiques together then you have a comic that gives audiences both an easy read and is pretty entertaining.

The story begins with Dellec, like I said fresh off the resurrection, staring into the eyes of three bloodthirsty beasts.  Two Doomsday-esque lions, one dragon snake.  Right away there’s a flashback which reveals how he died.  Stabbed in the heart by a giant creature… go figure.  Strayer, who refers to himself as the “hands of God”, decides to unleash his demon eyed monsters, and we have our first fight.  Punches, kicks, scratches, tears, blood, then with all his rage, Dellec releases a green blast of energy that brings the battle to a standstill… for now. 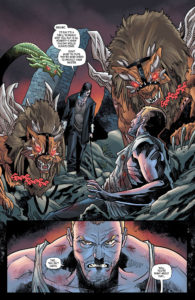 Next we resume with Leroy and the archangel that descend from above last issue.  She is sucking the soul out of one of the lives she claimed during her grand entrance of death.  Nothing much here, I’m assuming a slow burn with a later payoff.  But as the story transitions the writers include a page just to remind us that she’s here.

Following the follow up, we head to the city zoo where a cult of Blankas from Street Fighter called the Kongs, have the equivalent of a high school pep really.  Basically a bunch of dudes firing themselves up to take back the streets or something.  Then Strayer and his troop of demon beasts make an unannounced visit which includes an out massacre.  No Kong survives.

The issue ends with Dellec returning home where we get the typical movie gimmick where somebody enters an abandoned house and as they see the fireplace or something, it ignites a passionate memory.  A couple frames of that, then his daughter shows up. 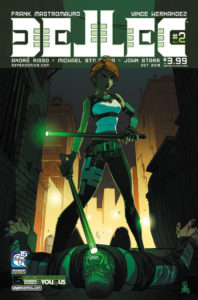 Now I will tell you this, like I said, Dellec is a very easy read, and pretty entertaining, but I have to address the elephant in the room… religion.  It’s kinda heavy on God stuff, maybe some imagery, not like Aspen is trying to convert you or anything.  Just know the series comes equipped with religious undertones.

Not that there’s anything wrong with that, however the element is present, and for some people, they may want to have their time with lord in church, not in their comics.

Religion doesn’t take away from the quality of the story, in fact it actually makes it rather unique.  Issue #2 offers the classic hero vs. the world dynamic, the artwork is cool, and the events that took place are setting up for something big.  Whatever it may be, the fate of humanity is on the line.

The new issue of Dellec is in stores now.

Did you check out the new Issue of Dellec? Let Nerdbot know in the comments!!