American Horror Story (And The Questions That Haunt Me)

What a season so far! American Horror Story has returned for their 8th season: ‘Apocalypse’. Which is supposed to tie in some of the best seasons from the show thus far. Those seasons include Murder House (Season 1), Coven (Season 3), Hotel (Season 5), and we are also expecting Asylum (Season 2) to come up at some point.

If you have not watched this season yet and do not want spoilers of the first 3(ish?) episodes then turn back now……YOU HAVE BEEN WARNED! 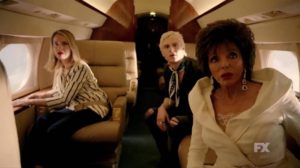 With only five episodes in, this season has shown that they are back to telling a more supernatural story after the mixed reviews of last seasons ‘Cult’. The first episode opens on present day time where it seems we have caused some sort of nuclear war based on the news reporter saying “We did it…I can’t believe we actually did it!” It was heard not once, but twice through two different characters perspectives which tells me there is a reason the writers wanted us to hear that. Did we launch the nukes? Did we start a war? Only time will tell the actual reason for the attack.

We see six of the main characters trying to find refuge in a secret place where the father of one of the characters, Coco (Leslie Grossman) paid for a ticket to a sanctuary. The remaining three characters tag along. Including her assistant Mallory (Billie Lourd), hair dresser Mr. Gallant (Evan Peters), and his grandmother Evie Gallant (Joan Collins). The only one who did not was Coco’s boyfriend Brock (Billy Eichner) 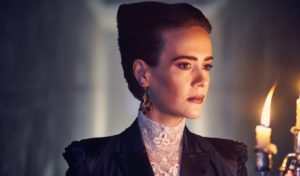 During this time we see another main character, Timothy being forcibly taken from his home because he is of “pure blood” despite Timothy having a twin. Fast forward to Coco & Co who are in the sanctuary, called Outpost 3, which is run by Wilhemina Venable (Sarah Paulson) and Miriam Mead (Kathy Bates). We see the world outside has become a nuclear wasteland where any one who goes outside must wear a gas mask and a protective suit. We see a couple being executed outside the outpost by gas mask wearing people, who we later find out were killed due to Wilhemina’s strict rules regarding sexual conduct. Later on Timothy and another young women named Emily breaks this rule in secret …for…obvious reasons, in the beginning limiting themselves to a kiss a week. I will come back to these two later. 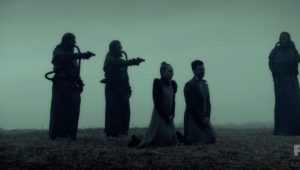 Now I’m going to skim through a bit to get to episode 3 “Forbidden Fruit” which left me and a friend of mine scratching our heads. At this point a new character arrives, Michael Langdon who seems to have some importance in the control of the sanctuaries and offers to take a select few from Outpost 3 to a new sanctuary that is better supplied and more secure. He does this by screening each person and finding those who match his desires for this new place.

But of course he’s not looking for the purest of souls, No no! He wants those that have the evilest of hearts. Those willing to do ANYTHING to survive. Wilhemina devises a plan with Mead that if everybody else is dead some how Langdon would be forced to choose them. This seems like a plan we have heard time and time again in various forms and genre’s. The whole “If nobody is left then I must be the best” plot point is a bit tired but some how it works just enough to keep things interesting. Although Langdon has said he may take everyone, some, or no one. Which shows how pointless this plan actually is if you’re not actually competing against anyone else. 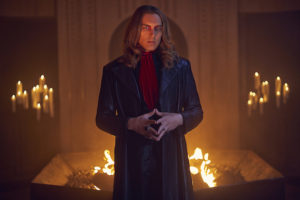 The way they go about doing this is by taking the venom from a snake and injecting it into an apple. Sounds like they decided to take a story straight from the Bible I think every one knows. But would inserting venom into an apple with a syringe and a needle actually cause the venom to course through the entire apple or would it stay where it was deposited? Or would it just kill the apple? These are just some of the questions that haunt me! Wilhemina announces to the guests that Halloween is approaching and she would like every one to get into the spirit and dress up by making costumes from what they can find in the Outpost. Despite them never celebrating a holiday for the eighteen months that some of the guests have been there.

Meanwhile, we flip to Coco’s husband Brock who we thought was dead has turned into this mixture of The Hound from Game of Thrones meets Snake Plissken from Escape from New York, who has been searching for his girlfriend and surviving on the land. He finds out about the Outpost from a few other survivors that he kills. He sees a carriage drive by and later we see he some how caught up to the carriage and has stowed away underneath it as it took him to the Outpost. He then eventually finds his way inside. Now here is where I have a lot of issues… 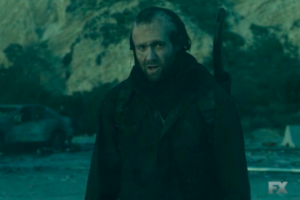 Let me lay down a timeline starting when Langdon arrives:

Day One: Michael Langdon arrives at night as everyone was turning in for bed

Day Two: He announces he will be screening everyone which seems to be an all day affair

Day Three: Apples Arrive, with Brock Hiding beneath the carriage.

Wilhemina and Mead devise the ‘Apple plan’ and begin work on tainting the apples and preparing them for the guests.

Wilhemina announces that Halloween is upon us in a few days

Day Four and Five: It’s Halloween and the guests are gathering for the party, 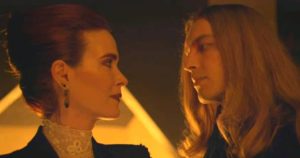 Got that so far? Langdon has been at the Outpost for roughly four or five days. During the Halloween party everyone is enjoying themselves for once. An interesting figure shows up covered all in black which every one assumes is Langdon. Coco starts to try and seduce him in order to secure her place at the new sanctuary. This black figure who has said nothing takes Coco up to her bedroom where she begins to go down on him. Before she has a chance to begin, the figure pulls off his mask and we see that it’s HER BOYFRIEND BROCK! He then takes a large knife and STABS her directly into her forehead!

There are so many ridiculous things happening in this episode that it blows my mind no one questioned things in the writers room! First off we established that Langdon has been their for at least four days and if Brock stowed away in the carriage that means he too has been there for 1-2 days before Halloween and nobody noticed? No body heard footsteps that weren’t theirs when they are gathered in the dining hall?

There are numerous servants (Grays) that didn’t see or hear anything? Also this place is supposed to register radiation as soon as you walk in and none of that went off? If that’s not bad enough how about the fact that Brock must have heard about the Halloween party and that every one will be in costume to which Brock said to himself in a Grinchy-like voice “That’s what I’ll do! I’ll wait till the party and dress up too! I’ll lure my girlfriend away and so she will never again see the light of day! It’s Brilliant! Nothing can go wrong!” He says with a smile from ear to ear as he twists his fingers snickering at his great plan. 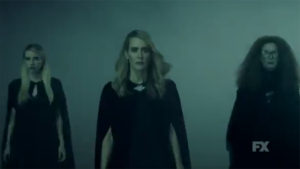 So we went from over used “If nobody is left then I must be the best” story line, to a section in the Bible, to now The Grinch. Not only is this story line reaching but the fact that he stabs Coco in the forehead which is the strongest and thickest part of the skull to drive a knife through slides in like butter. Does Brock have the strength of ten men? Has he some how gotten the Power of Grayskull?

Any body who has even watched a single episode of the Walking Dead or a zombie movie knows not to try and puncture there. I feel like the writers have gotten a little lazy and a little cliché on their writing this season which may also make this season much better because you easily understand the story because you have seen parts of it before which allows them to focus more on the character relationships. 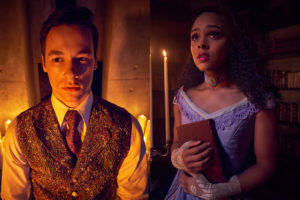 What about the couple you ask? Timothy and Emily? The ones the first three episodes spent showing their bond and their love connection. They showed how defiant of the intimacy rule they are by giving them scenes where the find out it’s not a real rule to which their reply is essentially “Let’s f–k!”….which they do. That couple? You want to know what happened to them? Well they ate the apples and died. That’s it.

Two more episodes and nothing. These two characters they invested a lot of screen time on are dead. Maybe they will show up later now that we are in flashback mode in episodes four and five, and the last thing we see in present day is the Coven of witches resurrected three people who ate the apple and died but all of these characters were resurrected for a reason and purpose. We haven’t seen if this couple does as well but as far as we know they’re dead. So, unless they bring that up in future episodes I’m going to feel kind of cheated.

I don’t know. Maybe I’m just nit-picking or maybe I’m just reading too far into the show. These are the questions that haunt me so far! Despite my annoyances this show is amazing and this season is starting to be one of my favorites.

Plus, what would a great show be with out some random fan trying to pick it apart?