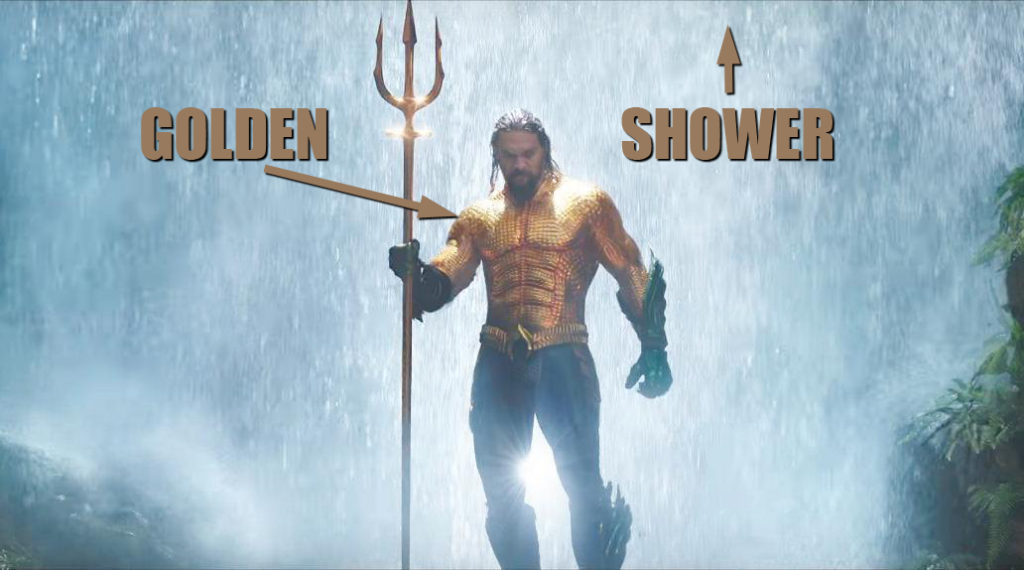 This is a “Nerd Voices” contributing piece from Nerdbot reader Aaron Russell. Aaron is staying gold on Twitter. He also has a website devoted to his Photoshop hilarity.

I watched five minutes Of Aquaman, so now let’s talk about pee.

Wait! Before you click out and close the article, I should probably clarify. I watched the new five minute PREVIEW of Aquaman Warner Bros released and now I keep thinking about the characters peeing.

But to be fair, it is the preview’s fault.

I was really enjoying the preview. And if the rumored 140 min runtime is accurate, it was safe to say I now have seen 3.571428571428571% of the movie. It looked like the fun, swashbuckling adventure director James Wan promised us. Like I said, it was going great, and then Aquaman and Mera reached ancient Atlantis and had to activate some ancient tech with water in the middle of the Sahara Desert. Mera swipes some sweat off Aquaman’s head and uses that to activate the device. “Oh, that’s neat,” I thought. Then Arthur Fleck Curry, forever college-bro young, belts out this line…

Of course it got a laugh out of me initially. But then, the dumb brain that ruins everything for me, which unfortunately lives in my head, asked the rest of me, “Hey. What do bears do in the woods?”

“What? You know the answer to that, dumb brain,” says the rest of me.

“Well, what do sea folk do in the sea?” dumb brain counters.

But of course it was too late. My dumb brain reminded me of razzing my kids at the beach, telling them how much pee the ocean must be if every living thing in it uses it as a bathroom. And since their grossed out faces wasn’t enough evil dad fuel, I followed up with, “Why do you think it’s so salty?”

So now, unfortunately, I was left in the situation of wondering if any of the Atlanteans were doing the biz at that particular moment. Hey, they’re underwater. No laws against it.

Some of these scenes get pretty crowded, too. Imagine a thousand underwater folk just hanging around in an amphitheater with no built-in facilities. Those poor gladiators, that’s not the taste of victory.

There are huge battle scenes, as well. And if it’s true that creatures usually “release” when killed, that battlefield is going to be a chum/urine/fecal fueled cloud of nightmares.

I’d hoped it would have ended with the underwater scenes, but no. An old Iron Man 2 joke followed me to shore.

Look, it’s not my dumb brain’s fault this all happened. It’s clearly the fault of the screenwriters. Have they not watched South Park or hung out at a public pool? You can’t put a pee joke in a movie about people living underwater without ramifications. Let’s just hope to god there are no poop jokes.

Anyway, I wanted to discuss the other aspect of this underwater world I found amusing. I got a real Flintstones vibe from it. As in, the underwater creatures seemed heavily incorporated into the everyday life of the Atlanteans.

In the 3.571428571428571% of it I’ve seen, I didn’t get the full picture, but there are hints of it here and there. We’ve seen that Atlanteans can practically “fly” through the water, but they choose to ride on various creatures instead. Giant, fanged seahorses serve as steeds. Other people are riding great white sharks. This tells us there’s probably a high turnover rate for Atlantean stable boys.

Again, it’s true we ride every creature on land that’s slightly bigger than us, but not as much as we use to. We have vehicles now. And we’ve seen in the trailer, they have underwater vehicles, too. Give the tylosaur a break, Ocean Master, and get a Humvee already.

There are other simple things you can point out. Like in the gladiator scene, there are several bioluminescent jellyfish hovering around to provide light for the place. What if the jellyfish had something else better to do that day? Also… 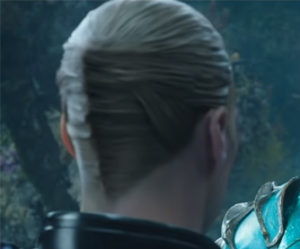 I’m almost 100% certain that Orm doesn’t coif his man-shark-bun on his own. There’s got to be a horseshoe crab under there or something. I’m half expecting, at some point, Aquaman to reach over and grab a lobster and pop the cap off of his beer with its claw and proclaim,”Awww yeah.”

But, aside from these takeaways, I’m hoping this movie will be the Lion King meets Little Mermaid story I’ve always been waiting for. Wan is a good director, the source material is pretty zany, and my wife drools every time Momoa is on the screen, so it has all that going for it. Even Ocean Master’s arc might be interesting and layered, as opposed to “me bad, want destroy”. Humans have basically used the oceans as their garbage can and toilet…wait…not going back there.

What did you think we meant?