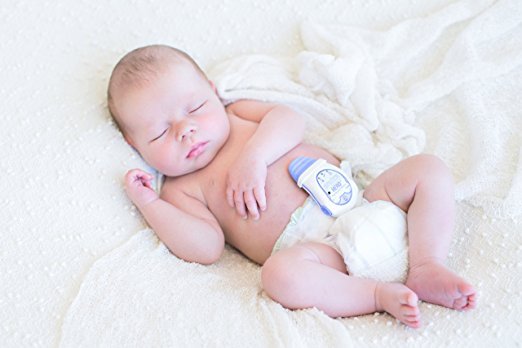 Baby merchandise is a booming industry and a complete racket. When a woman/couple is expecting a baby, they’re quickly told by the Babies R Us (may she rest in peace) catalog that their baby will not thrive unless an astronomical amount of garbage is purchased. From sleep sacks to luxury pajamas, special towels, and at least four kinds of bouncers/swings or sleeping baskets, just thinking about all the baby junk out there is making our bank accounts go limp.

What a person does or does not need for the benefit of their baby is completely subjective. If you like a product, use it. There’s a very good chance you’re not hurting anyone. But from the bog of the newborn struggle, a few specific items floated to the top of the swamp.  Uni-taskers, serving a singular function, that aren’t always ready to help.

Or in very specific cases, could be dangerous.

5) Breathing Monitors May Cause Extra Stress

There are two leaders on the baby breathing monitor market- Snuza and Mimo. First, let’s discuss the Snuza. The idea behind this chunky, clip-to-the-diaper object is that it alerts the new, paranoid parent if (stars forbid) the baby should stop breathing. In theory, a very nice idea for “peace of mind” (the words used constantly to sell the product) for new parents who are seriously hopped up with all sort of chemicals and hormones that tell their brain that their baby is going to die at any time.

I’m not being rude or factious here. I have two babies of my own. And with my first, my brain took insanity to a crazy place with everything I thought was going to happen to him. I’m not denigrating those emotions or even the rare, tragic experience some parents go through when their babies truly do stop breathing. But with breathing monitors like the Snuza, you now have two concerns on your hand. One, that your baby will stop breathing. And second, that the damn monitor will fall off the baby, start beeping, and you now think your baby has stopped breathing. So, in essence, you’re paranoid that damn thing is going to start freaking out for one reason or another at any time.

Other wearable baby monitors, such as the Mimo, tried to remedy the “fall-off technology” by making the entire bodysuit a monitor. The problem with the Mimo is that it connects to the Wi-Fi signal, and ultimately infiltrates it. I remember reading one Amazon.com review that talked about how in one case, a woman’s baby truly did stop breathing, but her Mimo breathing alert did not notify her (via app on her phone) because her husband was playing Playstation 4 and the two systems were fighting for supremacy on the Wi-Fi signal. Fortunately, the baby survived and the story wasn’t tragic. But anecdotes like this one are a flash in the pan compared to the amount of parents who ultimately admit that they did not truly need a breathing monitor for their newborn or admitted that this low-rated object just didn’t work.

4) Word Trackers Might Make You Think Your Child Has Delays

That’s right- I’m going to be blunt with that one there. Because the first time I saw the VersaMe Starling product on Amazon, a cute orange plastic star that claimed to keep count of your child’s word count and ensure language was coming in, the autism-mommy in me jumped to the defense and I knew that’s what it was trying to say without saying it.

Now, let me clarify something with this bizarre product- it doesn’t actually keep track of individual words. It seems that it only tracks how much the child is either being spoken to or is engaging in conversations. But as any parent of a child on the spectrum can tell you…it’s not that our children were not spoken to. We talk to them all the time. The same goes for children who truly have “speech delays” but the language pops and they can’t stop talking. Every kid is different and to judge them by the standards of not only every other kid, but a plastic orange star is just unfair. One of the more upsetting Amazon reviews on this product states that they want to know what the benchmark for “normal” is. What’s the “normal” amount the child should be saying? What’s the “normal” amount of words a plastic orange star should detect.

Products like the VersaMe Starling add another layer of stress to parenting; why isn’t my kid talking? What is wrong with him/her? Why isn’t this product encouraging them to talk more? Am I parenting wrong? And let me tell you- you’re not. And if you suspect your child may be on the autism spectrum, speech isn’t the only sign or factor. And really, that’s a determination for you and your child’s support system to make. Their doctor, professional therapists, psychologists. Not a plastic orange star that decides it doesn’t hear enough words flying around.

Introducing the Baby Brezza Formula Pro, the baby equivalent of a Keurig coffee maker that claims to warm and mix your baby’s bottle to effortless perfect. All you have to do is load the top dispenser with formula, keep a clean bottle handy, and have stagnant water in the tank ready to go.

Does no one else see how disgusting this is?

Because babies (especially new ones) are so vulnerable to health risks, new parents are told over and over again to keep all bottles and baby food items clean and as close to sterile as possible. That means using clean hands, leaving formula power in the receptacle it came in, and using fresh, clean water to prepare all bottles. Who then would be okay with using water that’s been sitting stagnant in this machine? Formula that’s been exposed to air? Parts that might be hard to clean, thus exposing the baby to mold? And the biggest one, at least for a person like me…how do you know that this machine is mixing the bottle ratios correctly?

Water Intoxication is a real thing among infants. Babies do not need extra water- their little bodies cannot handle it. Their kidneys are not mature, and diluted formula (IE excessive water) in their systems make their bodies release sodium. Water intoxication can result in death.

Now, I’m not a doctor. I’m not a scientist. I’m not even a sanctimonious mommy blogger. I’m just a person who gave her children breast milk with formula supplementation and really didn’t think shaking a scoop or two of powder into a couple ounces of water was all that inconvenient to risk a machine screwing it up.

And by “might”, there’s a very good chance that the steaming chamber is coated in rot.

Going back to the point I made about the Brezza bottle maker; baby food equipment needs to be sanitized. That option needs to completely exist and that’s why anything that doesn’t easily come apart for cleaning is probably not the best option. There are tons of baby food makers on the market, from the well know Baby Bullet (Spoiler: it’s tiny and loud as hell) to the Cuisinart models (which have complaints of mold all over the internet).

I tried lots of different food makers when my kids were babies. For my son (the first born), I made all of his food from scratch. He loved purees and I used to cook up batches once a week. He was fun to feed because he loved the fresh food, the flavored purees, and the new combinations. My method? A large pot with a steamer basket and a blender or food processor. It worked great, and I stored the food in little one-ounce cubes in the freezer. My daughter was pickier. She didn’t want to eat purees and didn’t appreciate my hard work. She’s a garbage baby who thinks ice cream and muffins are a food group. Therefore, baby led weaning was a better option for her. Small pieces of fresh food that she could cram into her little baby mouth. Every kid is different and you’ll feel it out as you get to know them.

Or they learn words to start screaming what they want right in your face.

These suckers have been the cause of parenting disputes for like, a hundred years. That’s a factual number, totally accurate statistics, no need for us to argue. There seems to be two schools of thought here; if you choose to use a wipe warmer, your baby is a sensitive, fancy little tyrant who can’t handle the North-of-the-Wall arctic blast of a damn cold wipe on their tush. And if you don’t use wipe warmers, you’re an insensitive, all-business jerk parent who doesn’t care if you’re inflecting irreversible psychological damage and scarring on your baby’s tiny rump.

As with most parenting conversations, there’s no winning.

But here are my feelings on wipe warmers- they are not necessary. Not only is it another thing to have constantly plugged into your wall (therefore sucking down power and electricity), but according to some reports, they are fire and electric shock hazards. I was already aware that they harbored mold, because anything sitting around in a warm, wet environment is automatically a bad idea. But going back to hormone ridden new parents whose brains are always anticipating disaster for their babies? Forget it- why would you keep a fire and shock hazard just kicking it in your baby’s room? It’s like asking Pennywise the Clown to babysit for you. It’s a no brainer to see it’s a bad idea.

Then again…every parent needs a break.

And good childcare is hard to find.

Why Starfox is in an Ubisoft Game