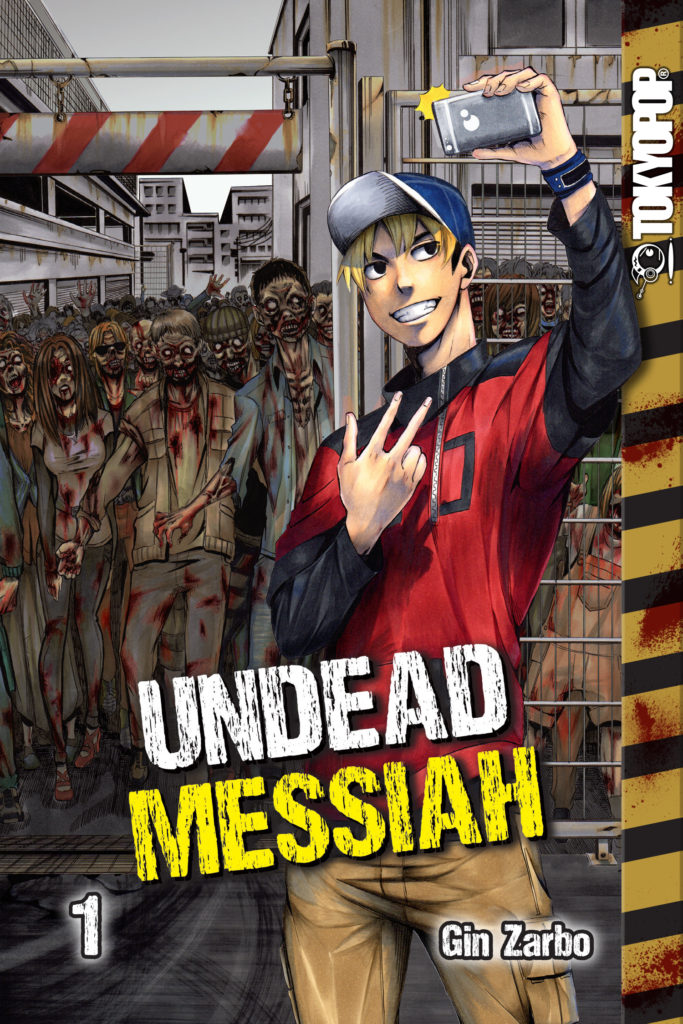 Nerdbot would like to thank Tokyo Pop for providing us with a review copy of Undead Messiah by Gin Zarbo.

Before I get into the review of the actual book itself, I want to just state something. I think it’s so incredibly amazing that we’ve hit the point (artistically) where non-Japanese artists and writers are allowed the opportunity to create graphic novels that are being recognized as Manga. Gin Zarbo, an artist/writer from Switzerland whose twin sister is also a Manga artist, created Undead Messiah using the traditional right to left art style. This is traditionally employed in Japanese manga because the dialogue is read vertically from top to bottom, right to left. I also learned that Undead Messiah has been translated from Swiss-German.

I remember seeing a new wave of Korean Manga hitting the shelves at Boarders (may it rest in peace) just as I my own manga reading consumption began to slow down somewhere around 2005-2006. But now, we’re experiencing a new wave of International artists. In my opinion, Tokyo Pop has always pioneered this movement, and inclusiveness and a variety of voices has been something they’ve had in their catalog from the very start.

All right- onto the story itself. From the book description:

A pregnant woman is pursued by a supernatural creature. On the internet, videos of a bandaged hero surface. 15-year-old Tim Muley makes a terrible discovery in his neighbor’s garden. Three seemingly unrelated events, all of which seem to point to an imminent zombie apocalypse! But this time the story’s not about the end of mankind; it’s about a new beginning…

We have a hook and premise: A teenage boy who is obsessed with a first-person shooter (and has become quite good at it) is a Dooms-Day Prepper, convinced that the Zombie Apocalypse will be upon us shortly. His best friend, a spunky headphones-around-the-neck (you know that character, she makes an appearance in many contemporary manga) named M-Kay tells Tim that he’s crazy. It’s interesting to note that M-Kay (admittedly not her real name) is orphan who lives in a boarding house. I feel like this is a tiny puzzle piece that will unfold into something bigger later in the story.

Within a chapter or so, surprise! The Zombie apocalypse is on its way, and Tim takes it upon himself to fight the creatures. Clues that something is up happen slowly at first and then spiral. First, Tim’s teacher is seen holding hearts (claiming they are pig hearts for a science class experiment). But soon after that, we call shenanigans. A few pages later, Tim finds his neighbor’s dead body outside in the yard between their two homes. And let me just say, the artwork for that picture is gnarly. I love it. Like, half the head is torn off leaving just the jaw, tongue, and bottom teeth. Super yuck.

That’s another point to touch on– the artwork here is awesome. Zarbo really has a great sensibility for action and is able to redraw her characters from many viewpoints and perspectives. She never loses touch of the integrity, all while keeping the voice and tone of the story even. It gets a little funny, it gets tense, it remains focused. The sensibilities are also very contemporary. Social media, Playstation 4, and other modern elements are right here in the story. 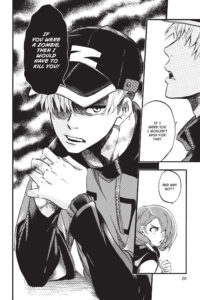 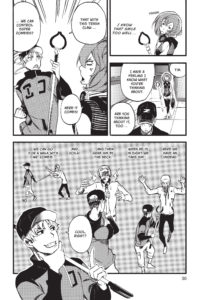 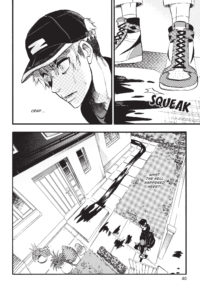 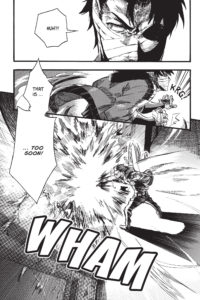 There’s a scene that takes place inside of a hospital and that’s where the story and action in Undead Messiah takes a little bit of a dip. The pregnant woman from the beginning of the book is now dead inside the hospital, but she birthed her baby (who Tim thinks looks a little too old and alert for a newborn). He suspects this baby might be his half-brother, as his father was bitten inside the hospital and turned into one of the infected. However, Zarbo manages to keep your attention by implementing romantic tension between Tim and M-Kay within the hospital scene. This method of storytelling is one that I actually really like– yes, we’re in the apocalypse. Yes, people are dying everywhere.

And yes, these two teenagers are still going to develop feelings for each other and softly flirt. I love it– it gives me life.

It’s important to note that there’s a scene where Tim’s dad is turned back from an undead. That’s not something you often see either. It makes me want to pay attention to what the supernatural rules in this world are.

Lastly, I’ll discuss the hook (again) of a Zombie Apocalypse story. Admittedly, it’s a little tired of a premise. It’s been done before. That said, Zarbo creates a world that’s layered enough with enough Japanese Manga influence that keeps the universe fresh. We have the “Bandaged Man” who can “perform miracles” who deems Tim some sort of chosen one. He travels with a little child-faced-quasi-demon-girl and you know the two of them are up to something. It’s almost like a character dynamic I haven’t seen since Chobits, and I like it. It reminds me of old manga where two trouble makers travel together, but we don’t know yet if they’re villains or anti-heroes. Either way, my eyes are open and I’m excited for Volume Two, which will be out on November 6th, 2018.

I give Undead Messiah by Gin Zarbo 4/5 stars.