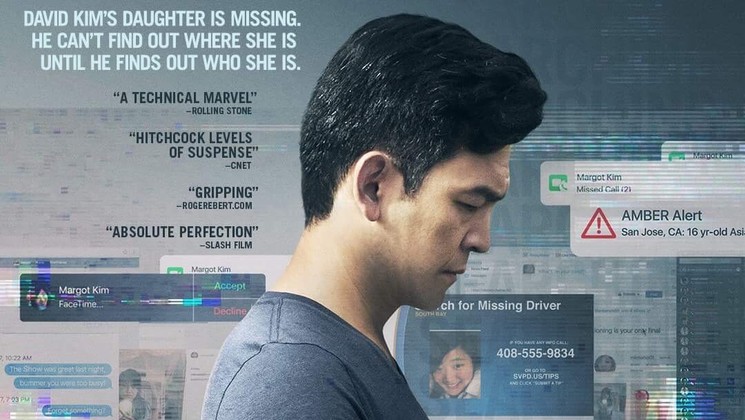 Searching deals with themes of Identity – who we are versus who we represent ourselves to be – and   Communication – how our interactions via technology both connect us and isolate us. The format of the movie is unusual as we see much of the film through the screens of smartphones and Skype, searches on Google, and text messages.  It is an interesting viewpoint as we seem to almost be in the protagonist’s place, typing away to try and find any clue to the missing girl.  On occasion as we “turn off” or switch media the movie screen will go black for a brief moment.  With the toned-down use of background music to give a more realistic effect I found these brief ‘blips’ of emptiness mildly annoying.

The movie begins with a quick montage of posts and pictures and videos introducing us to the Kim family: David (John Cho) and his wife ‘Pam’ (Sarah Sohn) and the birth of their daughter Margot.  We see snapshots of Margot as she grows until she is in high school (played by Michelle La) and also see the gradual decline of Pam and her eventual death from cancer.

The storyline really starts a few years after Pam’s death.  Father and daughter text each other frequently but don’t seem to discuss much other than the superficial.  David censors himself with his daughter, ensuring that none of his comments are too harsh or refer to her mother.  We find out later that Margot shares her feelings online with strangers because she can’t discuss them with her father. David is insistent to others that he and his daughter are “fine” while he avoids any reminders of their life with Pam before her death, be they pictures or videos or actual conversations with people they used to know. David is trying to put on a good show, but we can see the grief still oppressing him. Just as we can see Margot’s pain in her online chats.

The tension begins when David misses some late night calls from his daughter.  As an audience we know that Margot didn’t just stay late at her study group (otherwise there would be no movie) but David only becomes anxious when several attempts to contact her fail.  He discovers that she may have been lying about some of her activities, and attempts to reach out to her friends make him realize he doesn’t really know the people in his daughter’s life.  And when he does get in contact with some of her school mates he learns that they don’t really know her either, that she has seemingly distanced herself from her peers in the wake of her mother’s death.

The Long, Empty Corridors of “The Tragedy of…

With the time since his daughter was last seen increasing and with no answers in sight, David finally calls the authorities. Enter Debra Messing (in more serious role than her usual) as Detective Rosemary Vick, who will lead the investigation into Margot’s disappearance. She enlists David’s help in trying to get a handle on who his daughter is in order to discover what might have happened to her.

David begins to investigate Margot’s digital footprint in an effort to learn about his daughter. David becomes increasingly more frantic and the tension builds as there is no resolution to his daughter’s absence.  We join him in his investigations as various possible leads are discovered but they all seem to be dead ends.  There are some clever twists and turns along the way until David finally notices a detail that leads to the discovery of what really happened to Margot.

The film is interesting in its central mystery, its unusual presentation, and its themes.  The film explores the ideas of how we represent ourselves versus who we really are as well as the misleading closeness of online versus real world connections. The fellow students who didn’t really know Margot when her father first goes looking for her are suddenly posting how close they were when the media latches onto the disappearance. We find that you can be alone in a sea of Facebook friends, and that superficial online conversation doesn’t take the place of spending time with each other in real life.

Overall a 4 out of 5 rating for a clever mystery, an unusual format, and performances that let you feel the lingering grief of David and Margot as well as the growing tension in David and Detective Vick as the investigation unfolds.