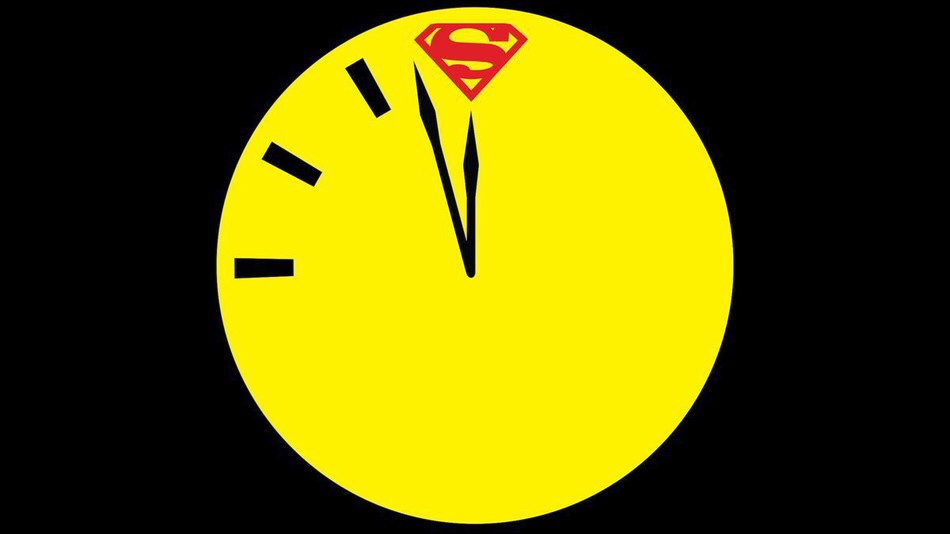 Welcome back to another edition of Nerdbot’s continuing coverage of DC’s epic Watchmen integration, Doomsday Clock. I hope you didn’t think I was kidding when I said we are in this until the bitter end because as the halfway point in the series is among us, there’s no turning back now!

I’ll say this until I die, the bi-monthly release format sucks. But for those of you who haven’t given up, I hope you are happy, because I definitely am.

So let’s start the discussion and yes, there are spoilers.

For now, let’s think of Doomsday Clock like a television show… perhaps maybe Lost. Used to be on ABC. Sometimes you get these episodes that are very ensemble driven. Multiple storylines, maybe they intersect, maybe they don’t, but no less a bunch of ground is covered which usually translates to major developments in the plot. These had a tendency to lean on spectacle, a “damn that was nuts” sort of thing. Other times, Lost would become very internal, focusing on a limited spectrum, more character driven. We can still get our wow factor, but it’s done in a way that may require you to hold on to the last page. A slow burn, often with a major payoff.

We can apply this logic to issues five and six of Doomsday Clock. Number five brought the wood when it came to appearances and significant events. Mr. Freeze, Black Adam, a Metahuman Cold War involving Superman, the Joker, Batman confronting Ozymandias, a Green Lantern, I can’t believe Geoff Johns and Gary Frank fit everything into twenty-six pages. When you’re reading the book itself, every other page seems to reveal a new twist.

Number six, entitled Truly Laugh, on the other hand was way more condensed. Don’t worry, there’s still plenty to talk about but if you’re looking to follow up on everything we got in May’s installment, you’ll have to wait, except for one thing…

Batman, he’s been captured, beaten, then taken to the Joker by Mime and Marionette. The delivery forms an expected union in the world of Doomsday Clock. The two crossovers have found their man. Go figure, there’s an instant bond. Even though the Joker has lost a couple guys at their behest, he’s sees opportunity in his newly found friends. 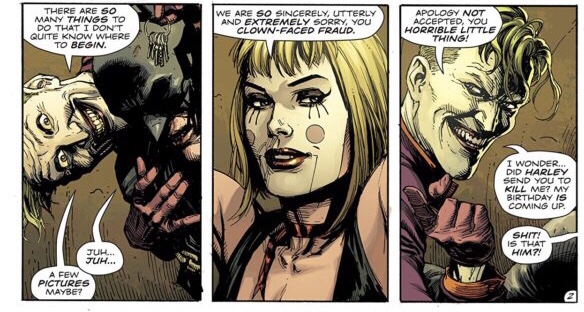 The first half of the issue mostly consists of Joker taking Mime and Marionette through an underground tunnel. Apologies are made, their gang gets a few new members, a guy gets his head ripped off, you know, a typical day.

More walking, more talking, then they come across a gathering of villains in an abandoned subway station. Some famous DC personalities such as the Riddler, the Court Of Owls, Captain Boomerang, Scarecrow, Mr. Freeze, Two-Face, plus a few lesser known characters have gotten together for a massive evil airing of grievances centered on the current Metahuman climate. 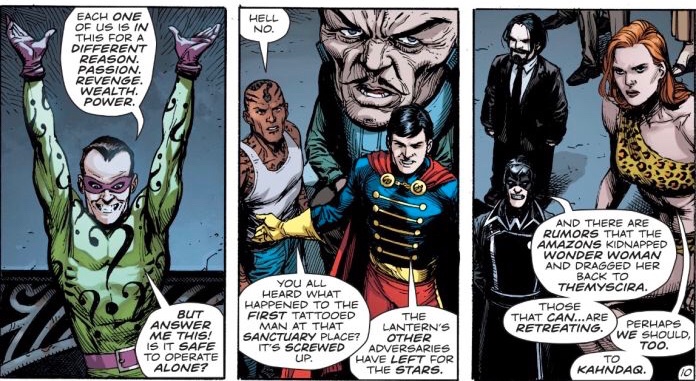 Joker wheels his prisoner into the room but before the crowd devours Batman like a tsunami of pent up aggression. The Comedian, starts sniping people from above. Typhoon gets a bullet to the head. A member of the Court Of Owls takes one right through the mask. Edward Blake is going full on Travis Bickle. Even as the DC bad persons get the advantage, the Comedian launches a grenade and blows up the room. As of now a body count is unknown.

Marionette and Mime manage to escape. They must have experienced a shot of adrenaline because for some reason they decided to engage in some post explosion love making. It thickens the already manic relationship we’ve been exploring with each new chapter. As the sex turns into cuddling, the Comedian comes through the door. Ready to finish what was started, he raises his gun, and the Joker intervenes, saving the day with a taser.

My favorite part is when the Joker takes the Comedian’s iconic smiley face button. 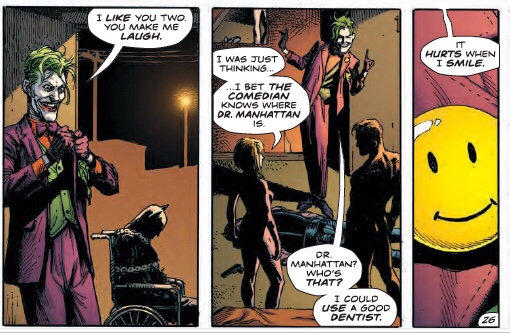 Remember our Lost analogy from before? You’re probably thinking; where’s all the character driven stuff?

So throughout the issue Marionette is given a flashback that details specific events which contribute to her villainous development. She’s basically the protagonist of this edition. We see her growing up the daughter of an immigrant whose father is mixed up with corrupt cops. She meets Marcos, child Mime, his family opens up a store across the street from her dad’s doll/puppet shop. When the other kids attack Erika, he throws glass bottles at their heads and their twisted romance begins. 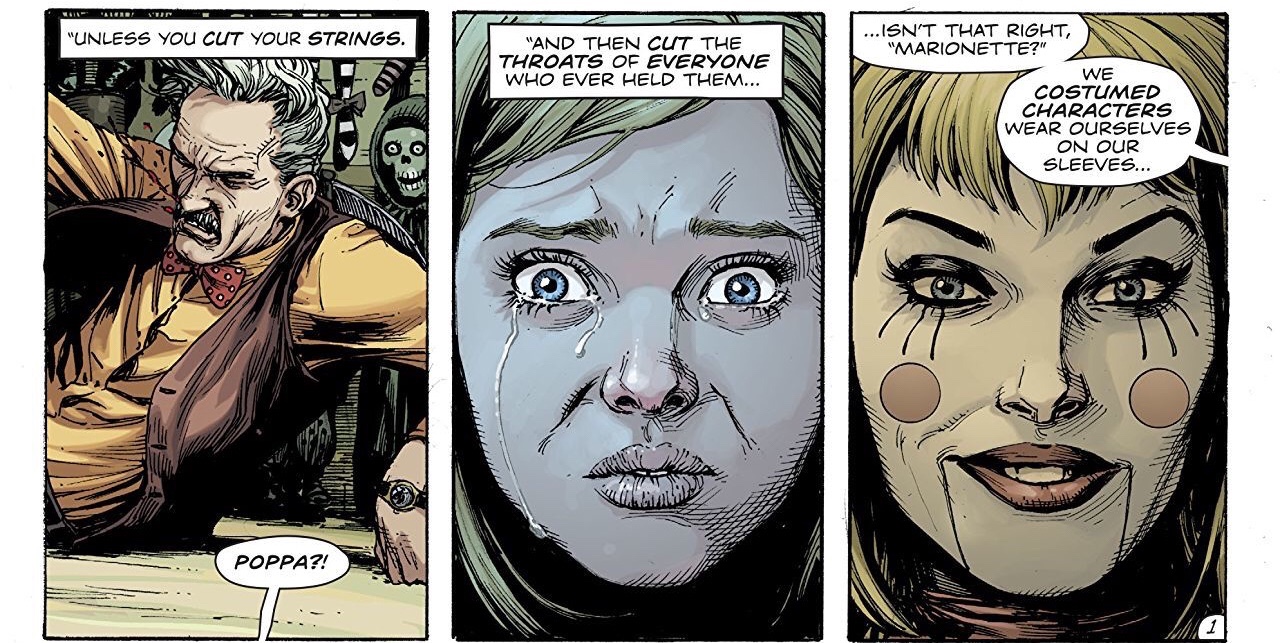 The police officers continue to press her father to be involved with their criminal endeavors but he resists, and is horribly beaten. Sensing himself as a threat to his daughter’s life, he commits suicide. Erika discovers the body then with the help of her silent companion, gets their revenge.

By making Marionette the central focus, the writers can slow the pace of the story while mirroring events in the current time. After you basically drop a bomb in the previous issue, the plot itself needs time to catch its breath. We can learn about her life as the situation she’s in rings true to past experiences. Survival, fear, love, loss, they’re all the same now as they were in the past only the stakes are higher. The writers can enrich our knowledge about Marionette as they set up the future of the series. We did see a touch of spectacle with the DC bad person assembly but the significance of the events goes well beyond having cameos to sell copies. We don’t know who yet, but lives were lost in the Comedian’s attack. Believe me, somebody is going to be looking for some payback.

So far Doomsday Clock has devoted whole books to newer main characters. Issue four provided insight to the modern Rorschach so maybe all new secondary costumed personas will get the back story treatment. They just can’t do too many more because the way things have heated up there might not be enough time. For some reason though, I’m expecting at least two more chapters to follow a similar format.

Why is the Comedian on a killing spree? What will happen to Batman? Will there be a war of Metahumans? Where is Dr. Manhattan?

Just like Lost, answer one question and ask two more at the same time. It may bug you, but it will keep you coming back.

What did you think of Doomsday Clock Issue #6? Let Nerdbot know in the comments!!