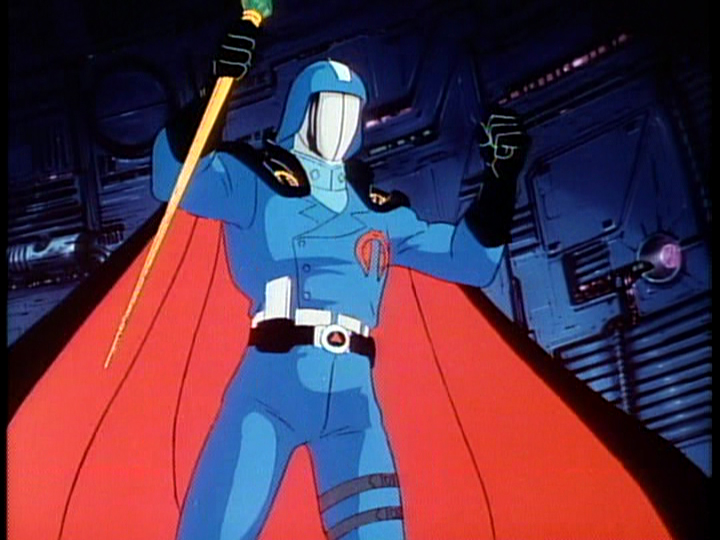 The good guy. The bad guy. When you’re a kid, you think it’s pretty cut and dry. But as we get older and become more apathetic and cynical, we realize that maybe the “bad guy” wasn’t such a bad dude after all. Maybe there’s someone else lurking around the cartoon universe right alongside our main baddie that’s just a little more insane, such as in…

4)He-Man Masters of the Universe:

Why were we watching Skeletor when we should have been watching…

Speaking of aesthetics, recalling the cartoons He-Man and She-Ra, a few words come to mind. Large, is one. Giant swords, giant green tigers, and every character has 37 abs. Another word is bright. With a setting that’s D&D meets Lego, there’s bright costumes, bright castles and a lot of lightning. Like a preponderance of lightning. But there’s another word.

The basic plot of He-Man is that Prince Adam acts like a lazy coward. But it’s a cover! When he grabs his sword, he can turn in the strongest man in the universe! Screw you guys trying to attack my friends! But it gets crazier! It turns out he has a twin sister, Adora who was kidnapped when they were babies and she’s the strongest woman in the universe! That’s a lot of good genetic material from mom and dad, gotta say.

The main bad guy of He-Man is Skeletor, wo seems to look like if a Smurf took way too much whey protein and visited the gym so much and got so swole he decided to rip off his own face after looking in the mirror. So besides being a giant with a skull face, he was also a powerful sorcerer. His specific goal is to put together a sword that will let him become master of the universe. But the only one who can stop him? No, not Evil-lyn! He-Man! So he gets some credit for having a goal. But that goal is soft. Because he just wants to be He-Man. SOFT. Back to the gym Skeletor! You can’t lift that sword, son!

Hordak, the main bad guy of She-Ra is the guy to pay attention to. He works to conquer the universe. All of it. He is also a sorcerer. In fact, he taught Skeletor what he knows. So that’s already a level up. And also, he uses a lot of technology. And by “uses a lot of technology”, I mean turns his arms into flamethrowers and turns himself into a rocket when he doesn’t feel like walking. That’s next level one-upmanship. Oh, and he wears an outfit made of bones. If I see Skeletor coming for me, with his gym back and magic staff, I am definitely running away. If I see guy wearing a suit of bones, with flamethrowers for arms and rocket legs, I am falling to my knees and asking a lot of questions to the universe out loud.

The premise was simple enough: Rainbow Brite, an immortal girl is granted the role of some sort of magical fairy of color and warm-weather. She brings color to Earth by use of a red color belt that sprays out rainbows when magical star sprinkles are shoved into it. A very cranky Mario-looking dude in a gray getup named Murky Dismal wants to get his hands on the color belt, stuff it with evil gray doom cloud, and destroy all the color from Rainbow Land.

Which, of course, never happens. Murky’s plans are constantly foiled. Dude also lives in Rainbowland, in an area called “The Pits”. First indication he’s not a threat? Rainbow’s never kicked him out. Makes you wonder if this thing between Rainbow Brite/Murky is just some weird giant game of cat and mouse. We know she could slaughter him. In “The Beginning of Rainbowland” she murdered the King of Shadows with just a press of her belt. Clearly, she’s not lacking any power here.

It’s not until the movie Rainbow Brite and the Star Stealer that we’re introduced to a villain that’s ready to get serious. Low and behold, The Dark Princess. This character is canon, by the way. She shows up in the tv show sometime after the movie came out. If the show and movie existed on the same time line, it means that the Dark Princess has been stirring up the danger-pot for a while.

First off, she heisted an entire planet called Spectra. She commanded an entire army of killer mechs to hypnotize Sprites (the little fuzzy dudes) and make them weave ropes over the entire planet so light couldn’t pass through it. Second, she uses a magic crystal to blast power at people. Murky and Lurky depend on smog. Smog. Like that thing you breathe in just existing in any major city. Third, that princess is after Rainbow Brite’s color belt. Not because it has supreme power. No, she has her own. She wants it because it will go perfectly with her red dress.

And last of all, the woman inexplicably survives her spaceship being blown up. It bursts into space dust…and she comes back in season two. Alive.

Ah G.I. Joe. Truly 80s America at it’s most laser patriotic. A group of soldiers from different branches of the armed forces with specialties come together. Need a guy who’s good with phones? Get Dial Tone. You need someone sneak into a place without being recognized? Have Dial-Tone call Lady Jaye. Proud speech in front of the American flag? Get General Hawk on the horn. Any other problems? CALL SNAKE EYES.

Their main enemy? The international terrorist group known as Cobra! They had their own island, they had spies everywhere even to the point of burger joints. They needed to be shot with lasers immediately. Their leader? The aptly named Cobra Commander. I mean an organization this big needs a strong, dedicated leaders to guide their villainy. Right? I mean rule with an iron fist and take over the world. That’s the plan. Just a guy screaming about how will take over the world in giant blue outfit.

But then there’s Destro.

He’s a Scottish Laird whose family has specifically sold weapons for generations. In fact, they sell weapons to both sides of the conflict. So what they do is they stir up trouble, and then when everyone is shouting and making threats, they sell them the things to murder each other. They go back to their castle and drink out of goblets.

That’s some dastardly mania right there.
Think about that. This the sort of guy who goes to a bar. He has a couple beers, sees an angry guy already drunk. He then proceeds to rile the up about how the guy in the corner is staring at him. Then, when this guy goes to the bathroom, he walks to the guy in the corner. Tells him the guy in bathroom is talking crap about him. Then when they start screaming at each other, he then sells them both machetes. Everyone dies and Destro does a couple shots with their money.

Eff that guy. Don’t take your eyes off Destro. Anyone can scream and carry on like Cobra Commander. Destro is selling your friends a gun and warning you that you might need one.

Teenage Mutant Ninja Turtles may be one of the few shows that every generation of children has a version of. If you ignore the live T.V. versions (WHICH YOU SHOULD), the cartoon has gone at longest 7 years without a new version coming out.  If you do count the live versions (YOU MADE A MISTAKE AND I WARNED YOU), that cut it down to 5. That’s bananas. That means every 10 years, there’s a new generation being introduced to 4 giant well-armed turtles named after artists. In this case, however, I will be focusing on the original 1987-1996 version that most adults go to when they think of it. And it that version no name shook your bones more than 1.

Let’s examine Shredder. He was a member of a ninja clan called the Foot. He had his rival banished and worked his way up to the guy in charge. When he finds out his rival is living in the sewers of NYC, he runs over to murder his ass right quick. In fact, in this version, he was the one who dropped the ooze into the sewers, because he was trying to kill his former rival. Oh yeah, Splinter was a guy who turned into a rat when splashed with a green goop. Shredder was also apparently a genius who can make robots and shit. He also dressed like he thought Wolverine was a subtle tease.

“He only has 3 blades on each hand?! Bring me my graph paper and drawing materials. I’m gonna show the world what sharply dressed means!”

I will not apologize for that pun.

For the first few episodes, Shredder actually takes it to the turtles. He beats them up often. He just always runs the second the tide turns. He then relies on his goons and robot ninjas to do his work. After that he very quickly is reduced to incompetent and there’s a very good reason.

Because a warlord brain from a place called Dimension X arrived. His name was Krang. His wanted to conquer all dimensions. “A-W first! Then I shall show Y and Z the true power of the Alphabet!”. He arrived in Manhattan in travelling war machine called the Technodrome. I love that name so much I have begun calling my kitchen the Hungerdrome. He doesn’t even care about Splinter and the Ninja Turtles. They are just in between him and his next step in alphabet domination. He let Shredder crash in the Technodrome. In exchange for not charging him rent, he makes Shredder build him a giant robot body so that he can walk around and sit in its giant robot stomach. You could joke that it looks like the robot looks like it’s pregnant.

It shall give birth to alphabetic destruction.