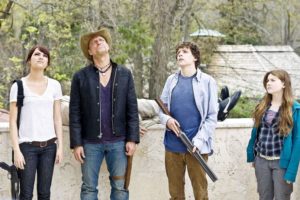 It may have taken almost 10 years, but Zombieland is ready to open its doors again.After fits and starts, Sony Pictures has reunited the cast of its 2009 surprise hit — including Emma Stone, Woody Harrelson, Jesse Eisenberg and Abigail Breslin — for Zombieland 2. The Hollywood Reporter states that the film will be directed by Ruben Fleischer, who helmed the original and is currently behind the new Venom franchise.

Deadline reported back in 2014 that the studio was mounting another installment of 2009’s Zombieland, which proved to be a cult favorite sleeper, grossing $100 million worldwide.

In Zombieland 2, through comic mayhem that stretches from the White House and through the heartland, the Zombie slayers must face off against many new kinds of zombies that have evolved since the first movie, as well as some new human survivors. But most of all, they have to face the growing pains of their own snarky, makeshift family.

Are you excited for Zombieland 2? Or have you had enough zombies for a lifetime? Tell Nerdbot about it in the comments and get the conversation going!