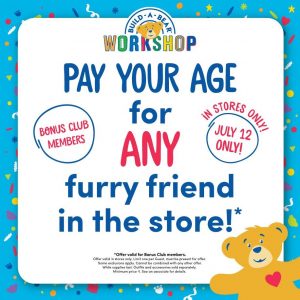 Any and all Build A Bear Bonus Club Members or people who sign up in stores were entitled to pay the price of the age of the child building the bear. So, want the exclusive Jugglypuff and your kid is 7? Pay $7! Want a classic bear with a skirt for your toddler? Pay $3 plus the cost of the skirt! This was a great sale for large families and a fun PR stunt.

Unfortunately, TOO MANY people love stuffing bears and twirling around holding a heart to get that love magic going for your Spider-Man bear…

Our local (California) store has to shut their line down and not allow anyone else to wait at 8:05 AM. The store opened at 10 AM. Oops. Many stores had to request assistance or were forced by law enforcement to cut down crowds. And not just here in the USA, in the UK and elsewhere too. 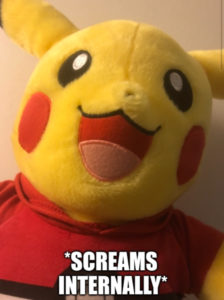 What should’ve been a fun day for families and nerds like me turned into a disaster. On Twitter, thousands of angry parents, jokes, and upset shoppers litter hashtags like #PayYourAgeDay with their furious tweets. According to an anonymous employee, some shoppers were furious about the lines and many tried to scam the system. Reports are that people altered ages or claimed pregnancies to get cheap toys. All in the spirit of capitalism and underestimated demand. And it all resulted in this statement from Build A Bear, basically announcing all their stores were closed to any guest not already in line: 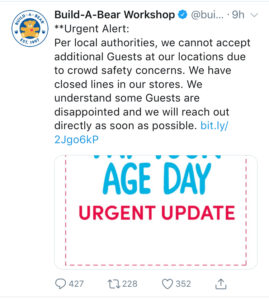 What do you think? Is this an epic fail or accidental win for Build A Bear? Do you know anyone who stood in line for 4 – 8 hours for a plushie?

Let Nerdbot know in the comments!