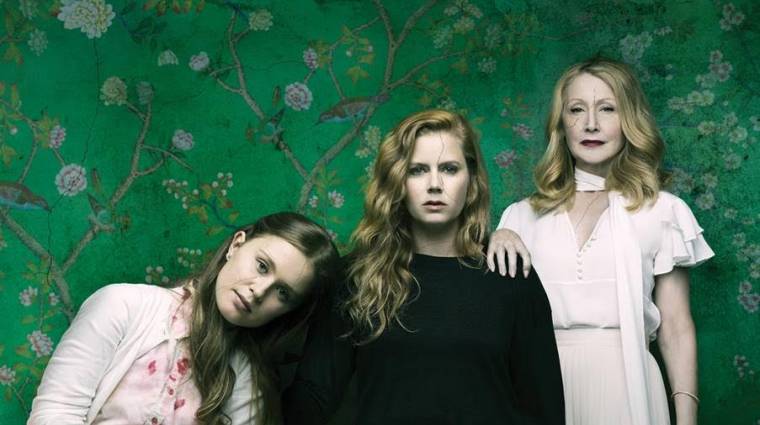 It’s a busy world, what with all the streaming and new shows coming and going so fast you barely know they came out until they’re old news. Sometimes it’s nice to slow down, and make an appointment for a weekly show, arrange some snacks and ponder the show after an episode rather than binging them all at 3am and then shouting “Done!”

Sharp Objects is HBO’s new limited series based on Gillian Flynn’s (Gone Girl, Dark Places) novel of the same name. Camille (Amy Adams) is a struggling journalist in Chicago sent back to her small home town of Wind Gap, Missouri to report on a series of child disappearances, the idea being that small town folk would rather speak to one of their own than some slick city reporter in a fifty dollar suit. She goes, albeit reluctantly, because as often happens when someone freezes like a deer in headlights when their past is mentioned, Camille is troubled.

I read the book a few years back, and while I loved the winding story and side characters, Camille irked me. She carries a bag of mini-liquor bottles around with her, she’s sarcastic, she’s depressed, she has a visible chip on her shoulder and snarks and snarls to even the most casual of small talk. In the book, she is Hard as Nails Female 101 (see: Jessica Jones, Rachel McAdams in True Detective 2,  basically half of all female detectives on Law and Order). I’ve grown tired of this trope, the 90-pound waif that drinks a bottle of Jack Daniels, punches a biker in the face, takes his buddy back to his place and then ghosts him,  has a vodka breakfast, wakes up by the Burger King dumpster with perfect eyeliner and heads to the office. She doesn’t have time for relationships or friends, just brooding over gory crime scene photos. This isn’t a strong female with issues, this is an unlikable mess that would probably puke purple all over your bathroom and not mention it.

Adams, however, does a good turn to the character of Camille. Her expressions alone, doe eyes and Disney Princess upturned nose, lend a softness and vulnerability needed in the character. She adds just a dash of sparkle –a small smile here, a sly, understated quip that takes the acidity out of it and humanizes her. She is dealing with old friends and family here, and moreover trying to get information from them, so teenage surliness would not be the way to go.  She is still dealing with her own dark issues, plagued by flashbacks of her younger self (played by It’s Sophia Lillis), but her damage and scar tissue of old emotional wounds feels genuine and relatable.

Sharp Objects is beautifully shot, making the small town a character in itself. You can taste the Midwest humidity. You can feel the random breeze that cools your sticky skin, if only for a moment. This is the kind of town that would never lock their front door. They are obviously upset by these particularly disturbing events, the police department wary of Camille making this national news. There are excellent performances by Chris Messina, reprising his role of “That Guy I Always Have to IMDB to Figure What I Know Him From”.  I kid. He plays Det. Willis, the lead on the case.  Patricia Clarkson moves about like a martini sipping wraith as Camille’s Old Money mother, disapproving of her in a way that only old rich women can. She clucks sadly at the horridness of it all and then in the same breath asks Camille how long she will be staying exactly. 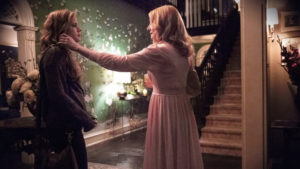 There is a particularly unnerving scene in this episode. Camille goes to interview the family of the first victim. At first you are struck by how the death of their child has broken this family. The set design makes this working class home feels like one you probably visited yourself as a kid. The father of the family takes Camille into the bedroom for privacy, as this is not a conversation he wants to have in front of his children. Slowly, the tension starts to build. Something feels off. You find your own eyes darting around the room. Is this the intensity of a bereaved father or the signs of a troubled family? The skin tingling thing about this show is that somehow, even the most casual interchange hisses “There’s something more here.”

Overall the pacing is good, the characters are believable and just enough information is set up in the premiere to get you hooked with about beating you over the head with twists and cliffhangers (*cough* Westworld). My reservations about the protagonist aside, I remember the book being pretty solid storytelling with a pleasantly measured pace. If the show follows suit (and I think it will based on this episode), it should a pretty satisfying series. In a dark, grisly murder type way.

Rating: 5 out of 5 based on the performances and pacing of the debut episode.