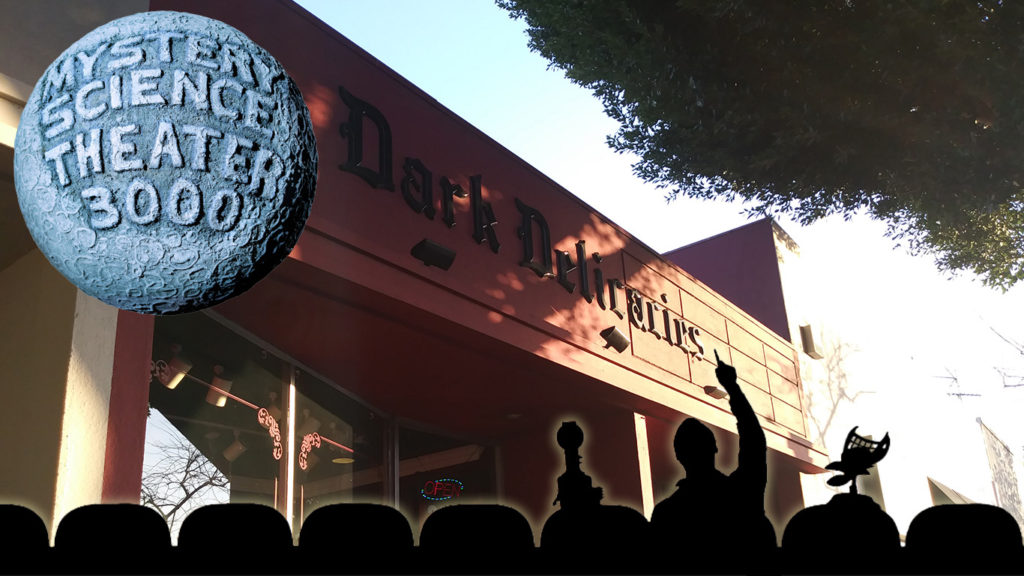 At Dark Delicacies in Burbank, California on April 17th there was an event celebrating the dvd and blu ray release of Mystery Science Theater 3000’s 11th Season. Many of the cast and writers were there including Jonah Ray, Patton Oswalt, Hampton Yount, Rebecca Hanson, Elliott Kalan, Paul Sabourin, Tammy Golden and Matt Oswalt. They had an Q&A moderated by Dana Gould along with a signing of the blu-ray and a poster.

A little background on Mystery Science Theater 3000 The Return! The Goal for the Kickstarter for this project was 2 million and with over 48 thousand backers they earned upwards of 5.5 million! On the last day of the Kickstarter they live streamed their picks for cast. Jonah Ray would be playing Jonah Heston, the newest prisoner and riffer aboard the Satellite of love. Hodgson wanted Jonah to be comfortable as the new host so Jonah was able to pick his robot companions entities, Hampton Yount as Crow, Baron Vaughn as Tom Servo and Rebecca Hanson plays Gypsy. The show got picked up by Netflix and premiered last year to positive acclaim and was accepted by the majority of the community. During the Q&A you definitely got a sense of how relieved they were that people were happy with the show and that they had worked really hard to keep the flavor of something they all loved back in the 90s.

It would have felt weird to go to an event like this and not use my cosplay powers to show my love for the show. I can’t help it since the anime nerd in me makes every event more about dressing up than anything else. Admittedly I was a little nervous to fly Brain Guy solo but for the sake of the event I swallowed my fear and headed out! Armed with a list of questions to ask the show runners I was ready for this night! Nothing was stopping this Brain Guy from picking their brains! (audience laughs)

I’m leaving the house like this when my husband Rick informs me that we need to go to the gas station before we head out. Great. Imagine me in my cape billowing with the wind outside and now filling the car with gas and getting Looks. It was fun to make creepy eye contact with people so I didn’t let it bother me. I started feeling a little more comfortable once we got to Burbank and to the the neighborhood where Dark Delicacies is. With all the vintage stores and halloween shops, you could tell this was a place that would accept a weirdo like me as one of their own. Or at least know better not to make direct eye contact with.

So I walk in and I am the ONLY person in cosplay… go me? Luckily the people that had already shown up immediately accepted my Brain Guy and got more than a couple positive glances. I picked up my preorder from the front desk and got to talk to Del of Dark Delicacies. He is such a cool dude! If I had more time I could have talked to him all day. He has fantastically cool long white hair and you could tell that this guy lived the horror lifestyle. If you ever find yourself nearby and have any interest in any kind of horror, this place was made for you. I can admit I am not the biggest fan of being scared for entertainment but the kind of stuff all over the walls and in glass was the kind of fandom I could get behind. Plus there was books on stuff like numerology and stuff like tarot which did bring out the inner 15 year old goth kid in me. It was amazing just to look at all the books, vinyls and freaking laserdiscs they had for sale.

Watching them set the name plates out I was getting more and more excited. I would be sitting near Elliott Kalan! I’ve been a long time fan of him from listening to The Flop House Podcast to picking out his writing on Comedy Central’s The Daily Show. Then they put down and extra name, Tammy Golden, who does writing for the show and the costuming. While I was geeking out my husband took a look around. Unlike me, he is a die hard horror movie buff and it was fun getting to see him lose his damn mind perusing the aisles and finding rare books and collectables. Like a kid in a candy store he wanted everything that wasn’t nailed down. I thought he was going to have a heart attack when he saw a vinyl version of the Dark Star soundtrack. I am not 100% sure what that is but he sure seemed excited. Dark Delicacies is the coolest place to find anything Horror and those antique things… What are they called again? Oh yeah!… Books!

To be honest with you I haven’t been a fan from the get go. It wasn’t until my husband and I started dating that I really sat down to watch any of the classic episodes. But what really unlocked the show for me has been the Return with the new cast. The references are at my level of nerdy knowledge and that makes it really fun for me to watch. I finally felt like I got what Rick was getting out of the show for so long and he was glad that I finally was starting to get the weird references he was throwing out over the years. So getting to watch the writers, the people behind the jokes, was really a special treat. Everyone was so on point and funny and the moderator Dana Gould was fantastic.

Many a Question was asked and Many answered in the most hilarious way possible. Some of the highlights were:

Jonah described some of the meetings he had with Joel over what the show would eventually become. There was a big laugh when he describes a dinner he and his wife Deanna had with Joel where he described how MST3k was always just about sex appeal.” They started to laugh only to see that Joel was confused over what they thought was so funny. It was great getting to hear some windows into the life of a guy who is hilarious but, as Dana said, “will look at the same things you look at but not see things the way you see them.”

Everyone shared their own experiences trying to capture the magic of riffing on horrible movies and how hard that can actually be. When people usually watch a bad movie they can turn it off if it gets to painful or at least find some friend or chemical to make it more bearable. These guys made it their JOB to watch these pieces of crap over and over again and had to make these films part of their lives. It was neat as someone newer to the show to get to understand how much work goes into making a bunch of silly jokes and how to make them fit into the style of the old stuff. Hampton Yount made a great jab of how easy it was to fall back into easy jokes that boil down to “I’m an idiot!” or “Nice shirt you piece of shit!” which you can’t really do. It also showed how they had come together as a team to make the show and you could feel that hearing them talk and joke around with each other.

They talked about the songs from the show after I asked a super stupid question to Elliot about whether or not the song from Star Crash was his. Even though it wasn’t he still didn’t disappoint when he sang his own version of what the Star Crash song would have sounded like if he had written it. “Crashing some stars, Its star crash, we’re gonna crash some stars here..” which was so great for me because I was really hoping I could get him to sing something. It was a good segue into learning more about the music from the show. According to Paul Sabourin the only really specific instructions that Joel had given pertaining to the songs was that in Star Crash he wanted a “Surf Rock” song. We also learned that the first thing that Jonah had to record was an epic rap they came up for him. Jonah wanted to get comfortable on the Satellite of Love and revisit it at a later time to which Joel said “No, no man this will get everyone on your vibe”.

Poor Jonah got the stink eye from Joe Dante because MST3K riffed on the Silent Earth which is “not a bad movie”. Jonah said he quickly defected by saying “Hey I was 12!” and Patton quickly responded by saying “Imagine what I could do to you know if I was 12 when I made that happen”

I already knew Jonah from the Nerdist Podcast and he has grown to be my favorite host. Those are fighting words for most because of the Joel vs. Mike debate but I stand by them. He told us a story when asked about worst feedback they have ever gotten for the show. Jonah “Someone tweeted at me and said, great Jonah is going to ruin my favorite show, to which I had to tweet back and say, I really hope not! It’s MY favorite show too! How devastated do you think it would be if I ruined my favorite show?”

At the end of it all I was able to get signatures and pics with most everyone there. Everybody hung out for a little while after the signing and got to chat about how much fun the event was and how excited we were for the 2nd season. The poster was especially rad since it was an exclusive for the event and had been drawn by comic book artist Aiden Casserly who was there to hang out as a fan. I love the art he did for the event and even in line I heard Jonah and the cast comment on how much they liked it too. You may know him best from his comic Scapula and if not you should check out his stuff since it is weird and wild in all the right ways.

It’s really exciting to know they are getting a new season and that the show will continue to live on. They were really careful not to talk about the movies they were getting but if the first batch of the episodes are any indication then the show is in really good hands. I personally hope they pick more movies like Star Crash because anything with scantily clad women is always going to be my 10/10