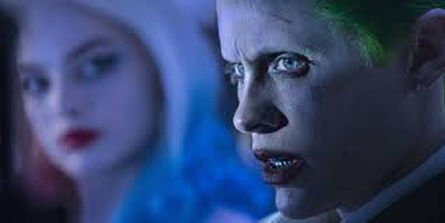 Jokers on the Rise

By [email protected]September 23, 2017Updated:September 23, 20176 Mins Read
Share
Facebook Twitter Pinterest Reddit WhatsApp Email
Last month,August has been interesting for the DC Extended Universe. Whether it’s been images from the upcoming Justice League movie, or even after many months, we’re still reading about how Ben Affleck doesn’t want to be Batman, the factory of drama known as Warner Brothers studios filled our Twitter feeds with headlines to keep us busy for years. But with all the options for us to discuss amongst our friends, the spotlight shines on the Clown Prince Of Crime himself, the Joker.

Before I weigh in on the subject I must point out that even though Ben Affleck has affirmed he’s staying, many times, and the rumors of his departure from the DCEU have been debunked, articles perpetuating this falsehood pop up online from time to time. Can we just give this a rest already?

Enough about that, let’s turn our attention to the Joker… here are the facts:– A Joker origin story is in development with Todd Phillips attached to direct and Martin Scorsese producing. The role is rumored to be recast for this project. (8/23/17 Deadline.com)– Jared Leto will return for Suicide Squad 2 and Gotham City Sirens. (8/23/17 moviepilot.com)– A Joker and Harley Quinn movie is also in development with Crazy Stupid Love writers Glenn Ficarra and John Requa (8/2317 ew.com)

Now “in development” does not guarantee anything. Development can end as quickly as it can starts, but I can only wonder why such a huge investment is being made for a performance that was nowhere near as heralded as Heath Ledger’s?

Crazy fan theory; the Joker origin story will introduce the “real” Joker, and Jared Leto’s Joker will be revealed to be an imposter Joker.

There has to be some methodology behind this but I cannot put my finger on it. No matter what they are going to make a truck load of money, however I’m afraid all this Joker exposure may wind up diluting the product. You know, overkill. Even Martin Scorsese cannot save a franchise character from getting played out. I believe that even though enticing… a Joker origin story is too much. Not only is it out of place, I fear DC is trying to push for an “R” rated superhero movie and rushing to get something in theaters would ultimately demonstrate that Warner Brothers has not learned from the mistakes of Suicide Squad (which is the definitive example of a “rushed” movie). Remember, at least one, if not all of these ideas may never come to anything. If I were a gambling man I’d bet money on Gotham City Sirens being consolidated into the another project.

Jared Leto and Margot Robbie are only going to continue to get more and more popular, it’s better for business to get those two on screen together again, and fast (just my opinion). Wouldn’t it be a smarter move if the combined talents of Phillips and Scorsese focused on re-branding the current version of the character instead of confusing the audience with multiple actors playing the same role, in movies that could easily be released in the same year? Think about it…

Which is why I will solve this DC dilemma for us all right now. Hey… Warner Brothers executives… you can have this idea for free.

First move, merge Gotham City Sirens into Suicide Squad 2, for now. Work in Poison Ivy and Catwoman (assuming they are the other two “Sirens”) to the script as supporting characters with standout performances that would merit a feature film. Then you can bring Margot Robbie to the table later on when the Sirens return to the screen is in discussion. Suicide Squad 2 may walk the line of having too may characters, but if done right, the movie can serve not only as a sequel, but as a platform to launch another chapter in the DCEU.

Second, get the writers of Crazy Stupid Love out of the driver’s seat and renegotiate the contracts to rewrite work. Glenn Ficarra and John Requa are better fit to handle the “relationship” element between Joker and Harley which will be a integral part of the screenplay, big time, but I don’t want them writing anything more. Nothing personal guys, this is going to be a team effort.

Then we consolidate the Joker origin story to include Harley Quinn and taking place before Suicide Squad, giving us our Joker/Harley Quinn movie.Imagine this…

Fading in to the sound of a tattoo gun and Leto’s voice over to the Joker (no Damaged face tattoo on his face, not going to lie, I hate it more than traffic) adding a robin to his vast collection of body art. The ink master finishes, the Joker heads to the next room where we find Robin, tied up, sitting in a chair. This is where we get the infamous Jason Todd death scene from the comics. Batman, yes Ben Affleck you’re presence is requested, is too late to save him but he beats the Joker senselessly, knocking his teeth out (giving reason for the metal replacements), and results in his incarnation at Arkham Asylum.

This is where the Joker meets Dr. Harleen Quinzel, who is first introduced to him while he’s broken, recovering from the encounter with Batman. So there’s like a whole Florence Nghtingale thing going on. She falls deeper and deeper in love with him. While he descends deeper and deeper into madness, tattooing “Damaged” on his forehead and growing increasingly hostile. Then we create a “rise to the top of the underworld plot” designed to fill in the gaps between his escape from Arkham, Harley jumping in the acid, and what we’ve already seen in Suicide Squad.

Of course… I could only dream for something like that.

My personal fantasy is somehow, and not being too corny or obvious, the writers work in a scene where Harley convinces the Joker to remove his face tattoo, which I believe to be the most important of many flaws in need of correcting.

Time will tell. Warner Brothers is a billion dollar company for a reason, and as a fan of DC everything, I can only hope the right decisions are made.

Check back with Nerdbot for all of your DCEU updates.

What do think of all this DC drama? Let Nerdbot know in the comments!!