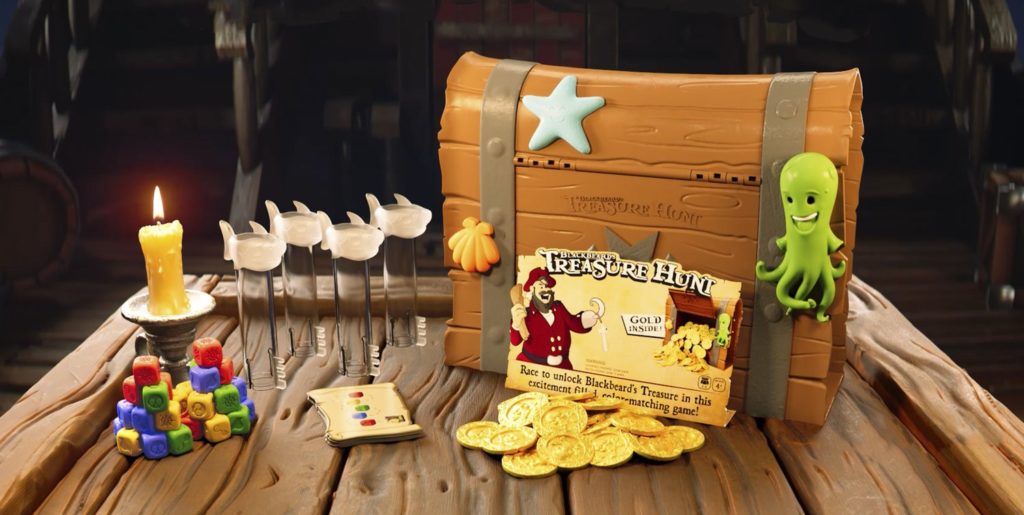 Vango Toys has created a really fun pirate game where players have to race to get the clues on the map and unlock Blackbeard’s treasure. I received a set in order to review. I thought it looked really interesting just from the commercial, which is really reminiscent of those old action-y ones for board games that would air in the 90s.

This game was great because we weren’t stuck only playing one way. They have instructions included in the game and even more ways to play online. My favorite one was the scavenger hunt because with that version you are able to get your kid up and moving. You collect four things on a list and when you have your four items, then you turn your card over and start collecting pieces. There is also a cool eye-patch one where you are supposed to wear an eye-patch to make it harder to see the pieces. The set does not come with eye patches but we folded up tissues and put them under our glasses. It worked fine.

The whole set is really cool to look at. I’ve put mine on a shelf in my study next to our “Pirates of the Caribbean” DVDs and it fits right in. Since it’s shaped like an actual treasure chest it adds a neat decoration anywhere you want to put it. And it’s a good size that you can put in a cupboard and it won’t take up much space.

My 8-year-old had a great time playing this and so did my almost 2-year-old. For the younger one it was more about stacking the pieces (in any order) and saying “Yay.” Either way though it kept them entertained for a while which for any parent is a great thing.

This game isn’t out yet but it’s slated to come out sometime this Fall. You can check here on Amazon to see when orders go live.