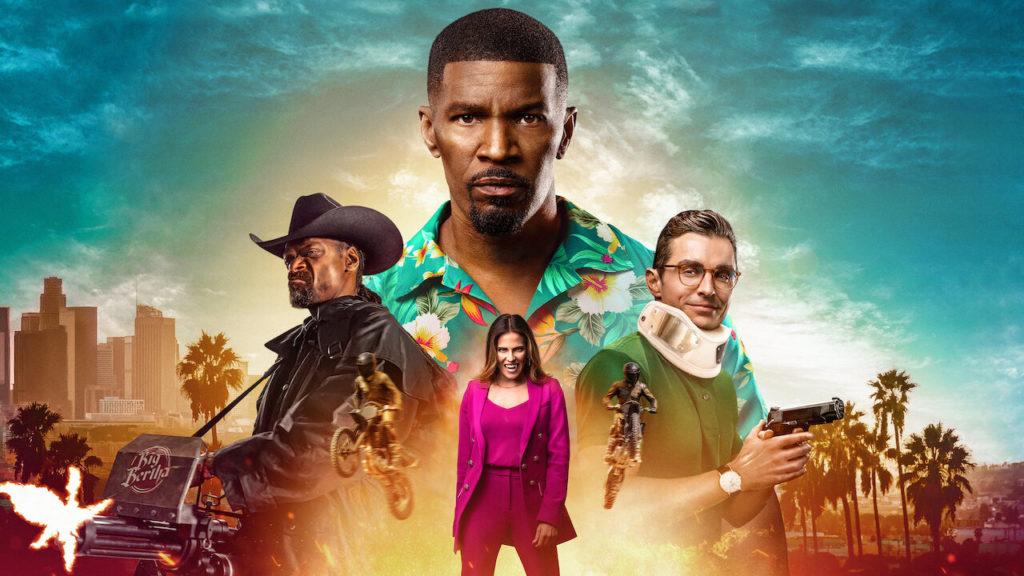 Truth be told, you had me at Snoop Dogg– Vampire Hunter. The rest was just kind of a packaged deal that comes along with bringing that to life. Luckily, “Day Shift” is just the right amount of silly, mindless, bloodthirsty vampire romp that makes something like Snoop Dogg Vampire Hunter seem completely ordinary. The narrative framework is comprised almost entirely of tropes and cliches across multiple genres, some of which don’t really even seem to fit here on paper at least. But what “Day Shift” lacks in original story telling it makes up for by injecting some fresh life into tired vampire stories. The basics might be stale, but the film elevates most if not all of the things we’ve come to expect from a vampire film into some downright unfiltered vampire hunting.

For what seems like forever, Netflix has finally landed on a big budget action movie that isn’t desperate to be everything to everyone and parade itself as being smarter and better than it is. “Day Shift” doesn’t exactly reinvent the wheel, but it knows what ride its on and what ride it wants to take us on when we fire this up on our televisions. What we get here is exactly what you would expect and want from a movie about LA based vampire hunters that includes Snoop Dogg in a cowboy hat and customized, handheld gatling gun. Seriously, what more could you ask for?

Directed J.J Perry (making his feature film debut here) with a screenplay by Tyler Tice and Shay Hatten (“John Wick” and “Army of the Dead” franchise) “Day Shift” follows Bud Jablonski (Jamie Foxx) a blue collar pool cleaner who is secretly a vampire hunter. He used to be apart of the union, a full on bureaucratic style operation of vampire hunters, but due to consist code violation, he now scraps by doing independent jobs for less money. With his estranged wife planning to move to Florida to be closer to her mother and planning to take their young daughter with her, Bud has one week to make enough money to cover the expenses that would keep them in Los Angeles. He begs the union to take him back, only to be saddled with a desk guy union rep Seth (David Franco) as an oversight to oust him if he breaks anymore codes. To make matters worse, one of his jobs ends up being the daughter of a power vampire undead set on taking over the entire Valley with vampires, and she is now hellbent on revenge. Bud most now deal with too green Seth, a vampire army, protect his family, and make enough to money to keep them together all in a week.

Look, there isn’t a whole lot going here in “Day Shift.” If you want to put on your critic hat for a second, the film is completely void of purpose and meaning, and from scene to scene feels like a collection of many, better films that came before it. It’s somewhat disjointed, packing in a lot of subplots that don’t all have the right amount of pay off and suffering that same “super easy, barely an inconvenience” resolution that seems to plague most films that operate in this genre. There’s also the false urgency problem, in which the climactic conflict is attempting to be more pressing than it is, with everyone just kind of taking their time so that the movie and final showdown can happen. It’s lazy, sure. And somewhat exhausting to see in yet another film and another one from Netflix that still can’t seem to escape all of their previous (and current) filmmaking mistakes. “Day Shift” from a critical standpoint is merely a conglomerate of vampire hunter tropes and buddy cop action hijinks that’s largely listless and empty calorie viewing.

Taking that critical hat off, however, and “Day Shift” is exactly as advertised, and I mean that as a compliment. Look, if you’re on board for Snoop Dogg Vampire Hunter, then you’re on board anything and everything the film sets out to do. And while it isn’t breaking new ground, it feels more reverent than insulting or copycatting. Sure, it borrows heavily from other things, even ending the film with their own version of “The Lost Boys” final line. But the film is having more fun just existing in this silly, wild, bloody space than it would were it trying to be something like, oh I don’t know, “Bright.” Where the quirky premise of overshadowed by a convoluted plot and desperate attempt to use fairies as a commentary for racism. “Day Shift” doesn’t amount to much when it comes to purpose because it doesn’t have to. It relishes in its simplicity and surface level antics which in turns makes it as fun to watch as it clearly seemed to make. As hit or miss, run of the mill as “Day Shift” is, I have to continue to give it credit for being exactly what it said it was going to be.

Are there vampires? Yes. Brutal kills? Yes. Fun, inventive gun-foo and a Scott Adkins cameo? Yes and yes. Are there quips, jokes, and silly implausible hijinks that ensue? You bet your vampire hunting ass there is. Not all of these things work in “Day Shift,” but it works more than it doesn’t to provide a find, easily consumable action comedy. Perry as a first time director is borrowing heavily from the people he clearly admires, and proves here that he has a knack for fast paced, close quarters action. Because the film is so playful and intentionally silly, the violence is able to be as ridiculous as the film itself. This lets the action deliver some truly great vampire kills and some clever new uses of vampire killing methods. “Day Shift” is big and dumb and loud, but it knows this and that self awareness is what makes a lot of what shouldn’t work end up being pretty enjoyable.

Sadly, Snoop Dogg isn’t in the film all that much, but when he is he’s doing exactly what you want him to do. Jamie Foxx as Bud is again as advertised, doing what he doesn’t best and dropping quick fire quips with that same kind of dry intensity that always feels like he one second away from laughing and telling everyone he’s just kidding. It largely works here, and being paired with Franco’s Seth is a better mismatch than expected. Franco has had a strange, rather varied career that doesn’t really have a lot of rhyme or reason to it all, but he plays Seth with a believable greenness and fish out of water rookie archetype that pairs well with Foxx’s hard nosed hunter persona. The film is really these two, as everyone else appears in a blink and you miss them in terms of quantitative screen time, regardless of how integral they are to the overall story. Aside from the two stars, the only other real standouts are the Nazarian Brothers, played by Steve Howey and Scott Adkins. They show up briefly to help Bud take out a hive of vampires, and deliver one of the best action set pieces in the entire film. If there was every going to be a spin off or continuation for more story in the “Day Shift” universe, The Nazarian Brothers MUST be front and center next time.

It’s pretty simple: “Day Shift” is nothing but a bloody, gun loving, vampire killing action comedy with big name actors, solid action and stunt work, and not much else. There’s nothing behind the curtain, and most if not all of the film falls apart pretty quickly if you think about it too long. It’s nothing new, and is largely forgettable after a single viewing. But despite all of that, “Day Shift” is still a helluva lot of fun, and is one of those films that asks you to turn your mind off and enjoy the show and then rewards you for doing so. It’s the reward that makes the bite worth the blood, and because “Day Shift” doesn’t ask you for any more investment than what it’s giving you, thus becoming a really enjoyable viewing experience.

Is “Day Shift” the best Netflix has to offer? No. But it is the best of their most recent string of outings, and I’ll take more of this than any more of say, “The Gray Man.” Sorry, but you gotta be more self aware than self indulgent, and while “Day Shift” gets a lot wrong, but it gets this right, which makes it a worthwhile film to sink your teeth into.

Sadly, there’s no shredded, oiled up shirtless saxophone guy in this one. I’m guessing they’re saving that for the sequel.

“Day Shift” is now streaming on Netflix. You can watch the trailer below.