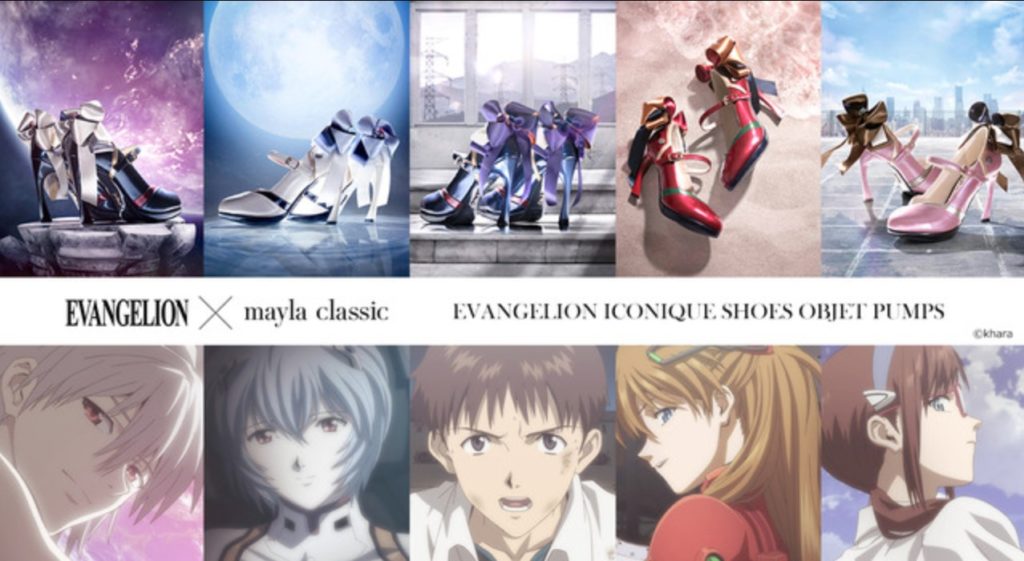 Popular fashion brand mayla classic has unveiled some spectacular heels based on “Evangelion.” Each shoe matches its respective character’s plug suit which is worn when entering and piloting their specific Evangelion. These shoes are in commemoration of “EVANGELION:3.0+1.01 THRICE UPON A TIME.”

Other fashion nods to the anime can be seen in the adornments. Each shoe has a silver rivet on the side, and a bow on the back. There is a center gem on the bow that is the same color of the character’s eye color. The soles of the shoe even has “Evangelion” logo patterns. Other words appear from the anime such as Nerv and LCL on the inner lining.

Mayla Classic has created five shoes based on Shinji, Rei, Asuka, Kaworu and Mari. The box they come in is something collectors will want to save. When you open the lid, it appears as if the shoes are floating in LCL.

You can try grabbing a pair from here, but you may need a proxy. You may be able to ask an import store that sells other Japanese goods if they can order them. The shoes are 30,690 yen, or roughly $226 (USD). This is obviously are more affordable price than the high fashion anime-inspired shoes. (*Cough cough* those Jimmy Choo Sailor Moon boots.)

You can watch “EVANGELION:3.0+1.01 THRICE UPON A TIME” on Amazon Prime here. It will also have a theatrical run in the USA as well as a physical release from GKIDS later this year.