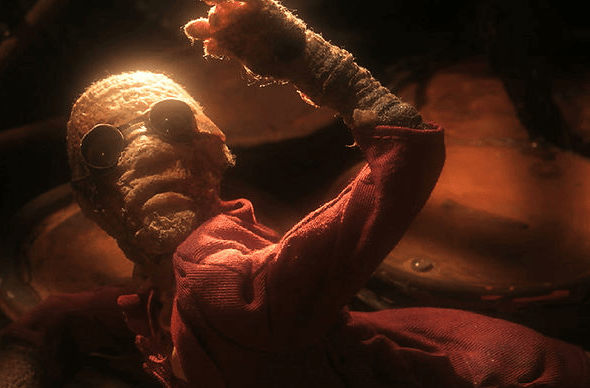 Legendary animator Phil Tippett’s 30 year in the making passion project “Mad God” has been unleashed upon the world. The film which finally came to fruition thanks to a KickStarter campaign is available to stream on Shudder.

Tippett is the mastermind behind the chess scene in “Star Wars” and the AT-AT Imperial Walkers. Most notably, he was the Dinosaur Supervisor for “Jurassic Park.” A film that we’d argue set the standard for what visual effects SHOULD look like, and continues to do so.

He started his own VFX house in Berkeley, California in 1984 and he and crew have worked on a bevy of films. However, he has had a personal project percolating in the background since 1987, and that project was “Mad God.”

The movie is described as “a fully practical stop-motion film set in a Miltonesque world of monsters, mad scientists, and war pigs.” What that means in actuality is a series of truly grotesque scenes strung together without a traditional semblance of a plot. There’s no denying the film is a showcase in technical mastery, but from a traditional film storytelling perspective it is a jumbled mess. If one were to evaluate it as experimental art it probably succeeds more.

If you watch the promo materials available and go “this is for me!” more power to you. For those thinking this could be David Cronenberg-esque body horror, or who are lured in by the clout attached to Tippett’s status in the industry…. you may need to reconsider. Many of the scenes felt like they were trying actively to make the audience queasy. While we firmly agree with Guillermo del Toro (who is a fan of “Mad God”) when he said “Animation is a medium, not a genre- nor an interest for kids & families only.”

Being grotesque for grotesques shake was not something we were quite prepared for and in such vivid detail. For those with iron stomachs and feeling bold, you can stream “Mad God” now via Shudder.