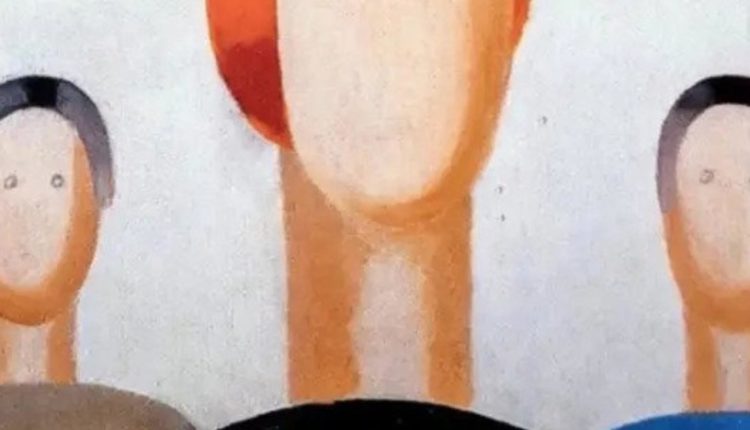 What’s the worst thing you’ve ever done in your first day at work? We’ve all messed up an order or left typos in an email, but one security guard managed to ruin a painting worth over a million dollars on his first shift.

Anna Leporskaya‘s painting Three Figures (1932-1934) was on display as part of an ongoing exhibition of abstract art taking place at the Yeltsin Center in Yekaterinburg, Russia. The painting was on loan from the State Tretyakov Gallery in the Russian capitol of Moscow. While nearly priceless, the 1930s work has been insured to a value of $74.9 million rubles, just over $1 million (USD).

The value and majesty of such a piece of art was of no concern to a new security guard on shift earlier this week though. The security guard, who has not yet been named, was employed by a private security firm and in the middle of his first night’s shift, when he passed the painting and decided it needed an alteration.

With a ballpoint pen, the guard added two sets of eyes to the painting’s faceless, staring figures, defacing the image and causing an uproar when the damage was discovered. A professional restorer inspected the painting, and it has since been sent back to Moscow in hope of repair.

What drove the guard to his sudden fancy for art alteration? He claims he was bored.

The Yeltsin Center has since opened a vandalism inquiry, and have stated the security firm responsible for providing the guard in question is responsible for paying restoration costs. Although not explicitly stated, it’s safe to say the guard is no longer employed in the field of art security. Luckily, the restorer claims the vandalism can be removed without damage to the painting.

Leporskaya was born in 1900, and studied under renowned Russian artist Kazimir Malevich. She is best known as a master of artistic porcelain, and her works are exhibited in the collection at the Russian Museum, as well as many other galleries.

Zoo Hires Marvin Gaye Impersonator to Help Monkeys “Get It On”