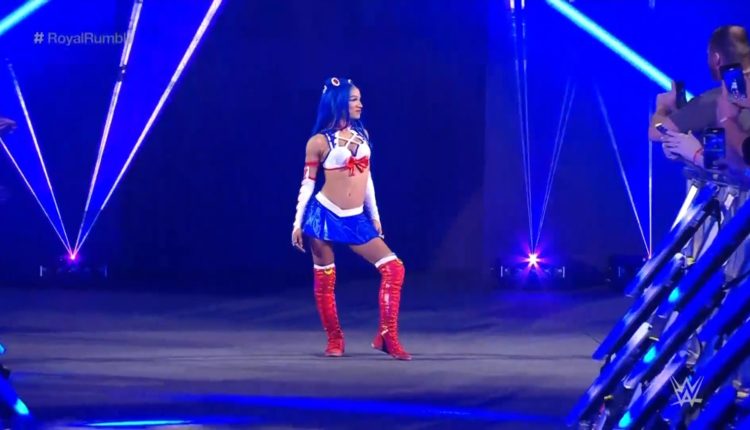 I may not have all the knowledge and facts of wrestling since I stopped watching around the time Stone Cold Steve Austin retired. But I do keep up with some of the newer stars including my favorite female wrestler, Sasha Banks. Back in 2020, she mentioned her desire to be a part of a live-action “Sailor Moon” movie. Based on her outfit from tonight’s Royal Rumble, she is not kidding around.

The best thing you can do when vying for a role is put yourself out there. Look at Chris Pratt for Star Lord, and Kumail Nanjiani! Sasha Banks totally rocked the outfit tonight.

It’s absolutely perfect! She has everything from the odangos (hair balls), to the choker and boots. I’m not sure if she designed this herself or had it made but you can see a lot of the meticulous details that was picked up from Sailor Moon’s first transformational outfit.

Speaking as a Sailor Moon fan, this is probably the most amazing thing we’ve seen in a while. We’re always looking for others like us to represent the fandom. Heck, when Lizzo rocked her Sailor Moon outfit we were psyched!

We hope that Mercedes Varnado IS approached to be in a Sailor Moon live-action film. There’s a lot of red tape and it’s probably never going to happen (as long as Naoko Takuechi holds the rights) but we’re rooting for her. I mean, she was AWESOME in “The Mandalorian.”

The Curse of Boba Fett: Not All Support Characters Should Be Leads

Top 10 Games Of All Time