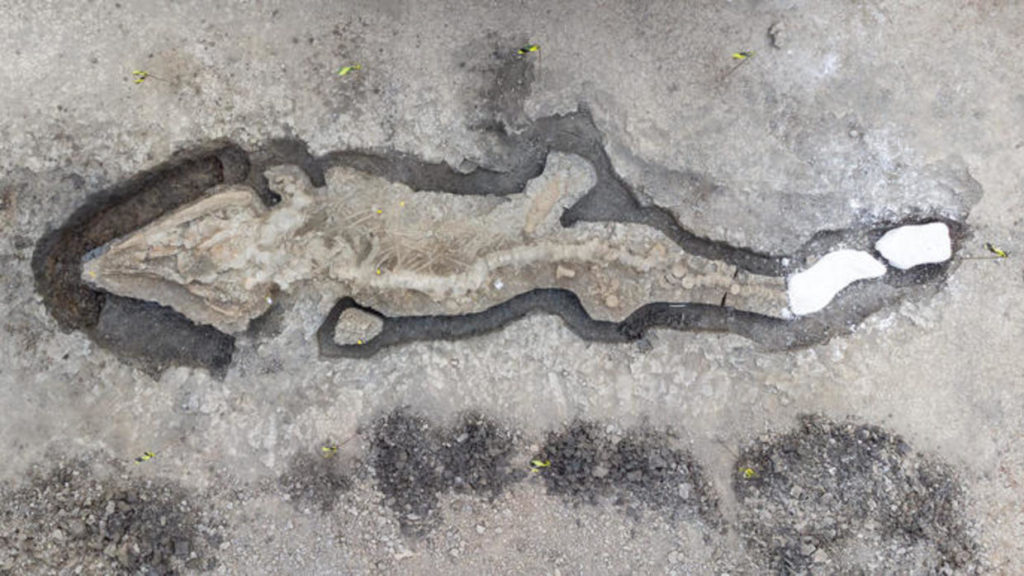 The incredible fossil of an absolutely huge aquatic animal has been discovered in the quiet English countryside. The massive Ichthyosaur fossil marks what experts are calling one of the most significant British paleontological discoveries in history.

Found in a reservoir in the humble English county of Rutland, the fossil is both the largest and the most complete of its kind ever found in the UK. Truly a sea dragon, the fossil measures almost 33 feet in total length, and bears an immense skull weighing a metric ton. The discovery also marks the first time that remains of this particular sub-species of Ichthyosaur (Temnodontosaurus Trigonodon) have been found in Britain.

Resembling gigantic dolphins, the Ichthyosaur (meaning ‘Fish Lizard’) was a species of immense marine reptile that existed in the early Triassic to late Cretaceous period, and have been extinct for around 90 million years. Most commonly found around Britain and north Europe, the first true Ichthyosaur fossil was discovered in the early 1800’s by Mary Annig.

The partnership of paleontologists that made the incredible discovery are intending to keep the fossil in the county of Rutland, England’s smallest county. Naming the discovery ‘The Rutland Sea Dragon’, the partnership have begun to raise funds to help ensure the fossil remains in the local community where it can be appreciated for future generations.