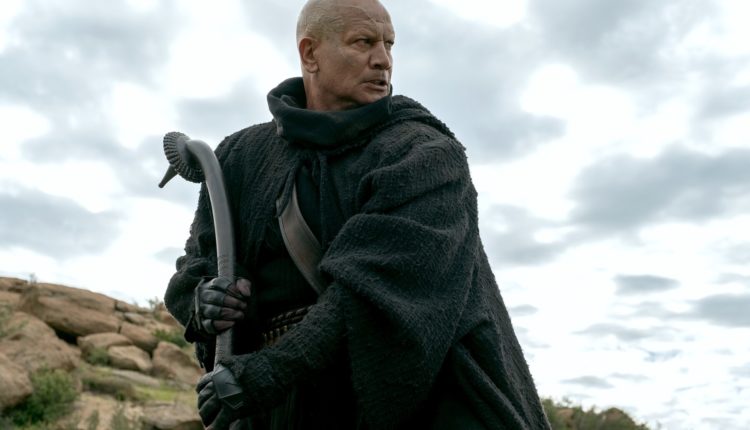 [Editor’s Note: This deep dive into the various tribes of Tusken Raiders on Tatooine comes to us from Anders Hudson, aka Grumpy Swede. It will contain spoilers for “The Book of Boba Fett” s1e1, as well as “The Mandalorian” s1e5 and s2e1.]

Well “The Book of Boba Fett” is finally here, and in addition to some great Fett backstory, the first episode kicks the door open on Tusken Raider canon. The question on everybody’s mind is why is this group different? We have already seen two different groups with minor variations. Let’s talk about the whey we know about and why these recent discoveries are such variants.

Disclaimer: This is mostly conjecture on my part. To date, nobody officially involved with “Star Wars” production has verified this, but I also have a degree in cultural anthropology, and my people have been making documented cultural observations out of what may have just been a lack of production continuity and drunken mistakes for centuries. All locations on the map are best guestimates following known Jawa trade routes, and ranges are approximate skirting deep deserts and densely urban areas.

To date, we have actually seen 3 predominant groups of Tuskens on Tatooine.

These are the groups from closest to the location of Fort Tusken from the Star Wars technical journal (purple star on the map). These are the ones that attack Luke and the droids in “A New Hope”, take pot shots at the pod racers in “Star Wars Episode I: The Phantom Menace“,  and are the family of the group(s) we see in “The Mandalorian.” While the ones encountered  by Din Djarin and Toro Calican were likely from the south (headed west from Mos Eislely to the western Dune Sea) the ones Din meets hunting the Krat Dragon were from the northern region near Mos Pelgo.

These are the classic Tuskens that we first see in “Star Wars Episode IV: A New Hope” when they attack Luke and the Droids (purple 1 on the map). They wear a long sometimes layered kaftan, a robe of a course material, and wrapped boots and gloves. They can sometimes be seen with a cape for camouflaging and neck wraps. The overall color of their garments and helmet wraps are a sandy brown. Their helmets have narrow eye stalks  with two ventilating cuts in the bottom, two ventilation ducts flaking the mouth grille or “teeth” that are part of the helmets rebreather system.

These same Tuskens are also seen taking pot-shots at the Pod Racers during the Boonta Eve Classic in “Star Wars Episode 1: The Phantom Menace” This was near Mos Espa (purple 2 on the map). We would like to extend a heartfelt apology to these Tuskens, we now know they were trying to prevent Darth Vader in their own way, and we are sorry.

Later,  In “The Mandalorian” s1e5, Din Djarin and Toro Calican encounter a small band of Tuskens while tracking Fennec Shand towards the western Dune Sea (purple 3 on the map). This is the first time we see sign language used to communicate with the Tuskens.

Next are the Tuskens responsible for raiding Mos Pelgo. The green area on the map is the probable range of the location of Mos Pelgo, since Peli Motto’s map from R5 is upside down globally; this is a best guess.  Din and Cobb Vanth strike a deal with a local group of Tuskens to stop raiding the struggling town in exchange for helping to dispatch a Krayt Dragon that has taken up residence in the former cave of a Sarlacc. (green 4 on the map)While later in this episode we see the standard Tuskens operating the ballista and riding banthas, it’s possible that this might be a 1.5 version of the Northern Jundland Tuskens, as the first group they bargain with have distinctively rust colored wraps on their helmets. Is this a faction tribe, or just a side effect of color correction? I’m sure somebody who cares more than me would make a good argument either way, though in the final battle we see both “yellowish” variations on banthas and heavy weapons and “reddish” variations on foot.

These are the raiders that are seen in “Star Wars Episode II: Attack of the Clones” when Anakin goes to rescue his mother Shmi, who was kidnapped from the Lars family homestead (blue star on the map). Following the Jawa trade routes, he tracks them down and kills Women…. and… Children… and then gets all emo about it later to impress a girl.

These look similar to their classic northern cousins, but wear a thicker over-cloak, and are all seen wearing the neck wrap that is only sparsely seen with others. In this group, we see females wearing a distinctive face plate helmet, and a shawl that goes over the neck and shoulders. Children are also seen in full metallic helmets and a simplified version of the adult robes.

The Tuskens in this region live in “igloo” like tents that are  covered in cloth and mud.

These are the newest edition to the Tusken canon, and by far the most distinctive. These Tuskens live on the far eastern corner of the map, and are both isolated by the Great Mesra Plateau and a line of urban centers from the other two groups. While this isolation could be responsible for their distinctive looks, it may also be a result of interaction for generations with the  Hut crime syndicate based out of the former nearby B’omar monastery. They are first seen capturing Boba Fett (red 1 on the map) after he escapes from the the Great Pit of Carkoon (red star on the map).

These look less similar to the other groups, though are variations on the theme. The helmets have shorter eye stalks with no vents, many rebreather mouthpieces are of lower profile. Females and juveniles wear the same helmets as the men, though the females still wear the distinctive layered shawl.  Black fabric is seen on nearly all wraps and native clothing, but captured/bartered clothing from elsewhere is also seen integrated in some cases.

Well, that’s what I got so far, it could be future episodes will blow all this away, or somebody with a cooler job than me will make a “definitive statement” on all this; but for now take this anecdotal evidence based in 40 years of media and maps stolen from video games and coloring books as “My best explanation” till a better one comes along.