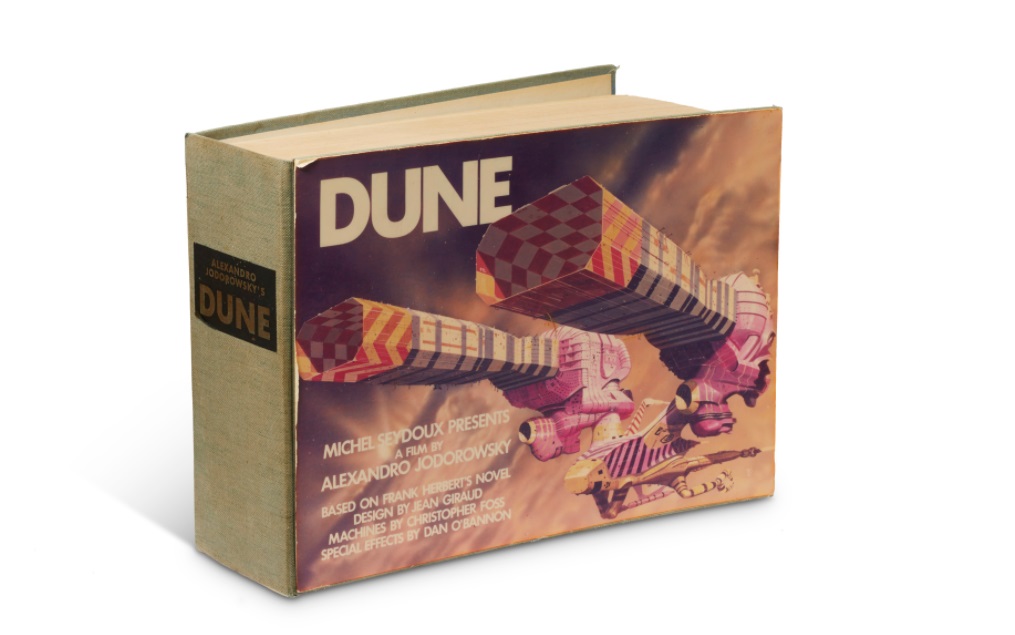 “Jodorowsky’s Dune” Bible Sold for Over $3 million at Auction

In the annals of film history, there are a few great ‘what ifs’ that may have changed the world of cinema as we know it had they ever come to pass. One of the most famous among these is the tale of Chilean-French auteur Alejandro Jodorowsky, and his obsession with creating the ultimate cinematic adaptation of “Dune.”

[Editor’s note: Jordorowsky is a problematic person to write about, as he admitted to raping “El Topo” co-star Mara Lorenzio. Read more about that here.]

Jodorowsky’s conceived project (when he acquired the rights to adapt Frank Herbert‘s Sci-Fi epic in 1974) was vast in scale, obscenely ambitious, and was filled with amazing names in virtually every aspect of production. Original music was to be created by Pink Floyd, right around the time of “Dark Side of the Moon.” The conceptual design was to be handled by the unbelievable duo of legendary biomechanical artist H.R. Giger and one of the most beloved comic artists in history, Jean Mœbius Giraud.

Every step of the prospective cast for the project is enough to bring a tear to a film fanatics eyes. Jodorowsky had planned on the likes of David Carradine as Duke Leto Atreides, Udo Kier as Piter De Vries, Salvadore Dalí as Emperor of the Known Universe Shaddam IV, and Mick Jagger as Feyd-Rautha. The eternally villainous Baron Harkonnen was to be played by none other than Orson Welles. Can you imagine it?!

Chronicled in the documentary “Jodorowsky’s Dune” (which you can watch on Amazon here), many consider the project the greatest movie never made. Jodorowsky’s “Dune” would have been an insane 14-hour psychedelic experience. It would go through torturous pre-production throughout 1976, hemorrhaging funds left and right. It eventually slowed, stalled, and collapsed entirely under it’s own insanity. After years languishing, the film rights were sold off to Dino De Laurentiis, who would go on to instead produce David Lynch‘s 1984 “Dune.”

The desire to flip through the pages of such a piece of filmmaking history is palpable for many, and this last week, Christie’s Auction House offered the chance at attaining such an experience. Up for auction was one of the only copies of the Dune bible left in the world, and was valued originally between 25,000 and 35,000 Euros. This would prove to be a drastic under expectation for the prized volume however.

When bidding closed on the incredible book, the final price realized was 2,660,000 Euros. That’s just under 3 million American Dollars for this near-mythical piece of film history. The group who made the purchase, going by the name DuneDAO, will now vote on exactly what to do with the physical item in the future. A core member of Dune DAO said of the purchase, “I just want people to experience it.” This is a promising statement for the possibility of the tome being digitized and, hopefully, made available for others to finally be able to experience.

Even though Jodorowsky’s “Dune” never happened, it left a mark on Hollywood that can’t be denied. Jodorowsky had created a book in the process of shopping the idea around. The massive tome was thick as a brick and included the entire script, thousands of pieces of conceptual art, complex, storyboards, everything that would make his film the vision he intended. This tome became known as the Dune bible, and probably changed Hollywood forever. It passed from studio to studio, inspiring seemingly all who perused its pages, and likely inspired the future of science fiction, everything from “Star Wars” to “Aliens” taking elements of the designs and concepts found within.

In other recent news, Jodorowsky and Moebius’ “The Incal” is getting adapted by none other than Taika Waititi.