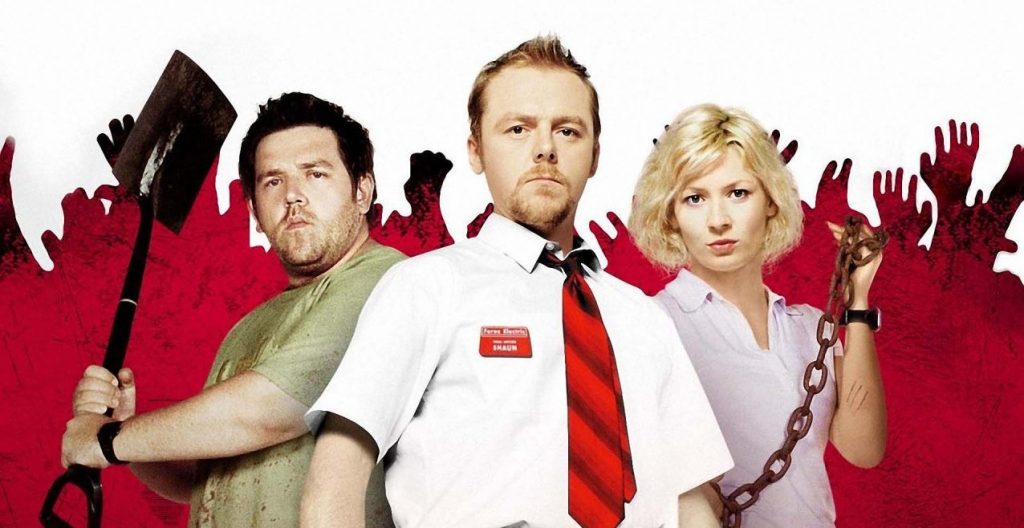 While scrolling through the list of zombie flicks attempting to pick out my favorite, I was surprised to find how difficult picking a top 5 actually was. Considering how little I care for horror as a whole, the sub genre of flesh eating, reanimated monsters seems like it would be an easy one to skip and discredit. As it turns out, I’ve actually seen quite a bit of Zombie flicks, and even more shocking, I actually like a lot of them. So, this intro won’t require as many disclaimers as some of the other sub genres require. One thing I will say is that while George A. Romero is herald as the father of Undead, none of his films make my top 5. I know, blasphemy! But while I can appreciate the creator, it is my opinion that those who were inspired by him are more in line with my taste and enjoyment within genre.

You will also notice the absence of films like “Evil Dead 2” and “Army of Darkness.” While some would consider the Deadites a form of zombie, as they are technically reanimated dead bodies, I am discounting them because they are more possessed than brought back to life. I know that some would disagree, and frankly there isn’t really a right or wrong answer when it comes to these classic films. But for the same of this listing, I am excluding anything that travels into demonic or possession territory. With that, let’s get into my top 5 favorite zombie films!

Before the country dominated Netflix with murderous kid games, Korea delivered on another stellar film with “Train to Busan.” Seriously, this is easily one of the best zombie films of the last decade, and you’re doing yourself a major disservice if you haven’t checked it out yet. Even people who aren’t necessarily fans of the genre have a hard time denying how terrific this movie is. Aside from being expertly executed and well written, “Train to Busan” manages to do something many other zombie films (including some on this list) fall shy of achieving: you actually CARE about the characters. Like, not just “oh I hope she makes it” but like “I swear to god if anything happens to her (or him) I will literally riot in the streets” kind of investment. The film is gripping, well paced, and packed with characters that evoke emotions seldom experienced when watching the undead.

“Shaun of the Dead”

The zombie genre is probably the easiest to convert into a meta narrative, and lends itself nicely to the horror/comedy genre blending. “Shaun of the Dead” nails this balance, introducing the world the comedy duo of Simon Pegg and Nick Frost through the undead. The film isn’t just hilarious, but it’s wholly British, which allows it to function as a solid zombie movie even if you were to take out all of the jokes. I love everything about “Shaun of the Dead,” from the cast to the humor to the clever use of cliches and tropes. This is a staple of my Halloween movie viewing, and I watch it just about every year. And “Shaun of the Dead” has probably the best use of “White Lines” in any film ever. I’ll die on this hill.

Keeping the horror/comedy genre alive and well, “Zombieland” is also the perfect blend of undead killings and comedy. It’s armed with a stellar cast and a fun premise, equipped with rules for survival and the always funny “Zombie Kill of the Week.” The film also has a lot of heart, with our heroes having much more depth than you would expect from a meta narrative horror satire. That probably has more to do with the incredible cast than what’s actually written on paper, but “Zombieland” feels complete in just about every facet of its execution and really stands out as one of the best horror/comedy films in years. You can also feel how much fun everyone involved is having, with “Zombieland” feeling like it was just as fun to make as it is to watch. Plus, it sports one of the greatest cameos of all time, one that never ever gets old. Rule #32: Always watch “Zombieland.”

Say what you want about Danny Boyle and his highly stylized (and somewhat inconsistent) filmography, “28 Days Later” seems to be a perfect fit. The grainy, B-movie style mixed with a modern take on a zombie outbreak in Britain is one of my absolute favorites for a lot of reasons. For starters, it marks Cillian Murphy’s international breakthrough and damn is he fantastic here. Second, it has a unique take on the outbreak. Not just in how it got started, but also relegates it to a singular location and country rather than delving into a global outbreak immediately. This idea is expanded on in the lesser sequel “28 Weeks Later,” but keeping it local and contained makes the film refreshing within its own genre. And lastly, it plays with the idea that the real monsters are the ones who survive, and that humanity will quickly become the real threat in the face of catastrophe. This feels oddly familiar, too. Almost like…we’ve gone through our own pandemic and the true colors of humanity were revealed….

I shit on Zack Snyder a lot when it comes to his superhero outings, but I have always been clear that I don’t actually think he’s a bad director, just wrong for the DC franchise. That being said, Snyder’s “Dawn of the Dead” is him at his best. It predates his obsession with overly long slow mo shots, and delivers solid visuals and a compelling story without feeling overly pretentious. I know its probably bad form to include the remake without including the original, but this “Dawn of the Dead” is a bit more my speed and was released at a time when I was young and impressionable. Plus, it’s just a really, really well made zombie movie. There’s one scene involving a chainsaw that always comes close to taking me out of the movie altogether, but aside from that “Dawn of the Dead” is one of the best, straight up zombie movies in the last 20 years.