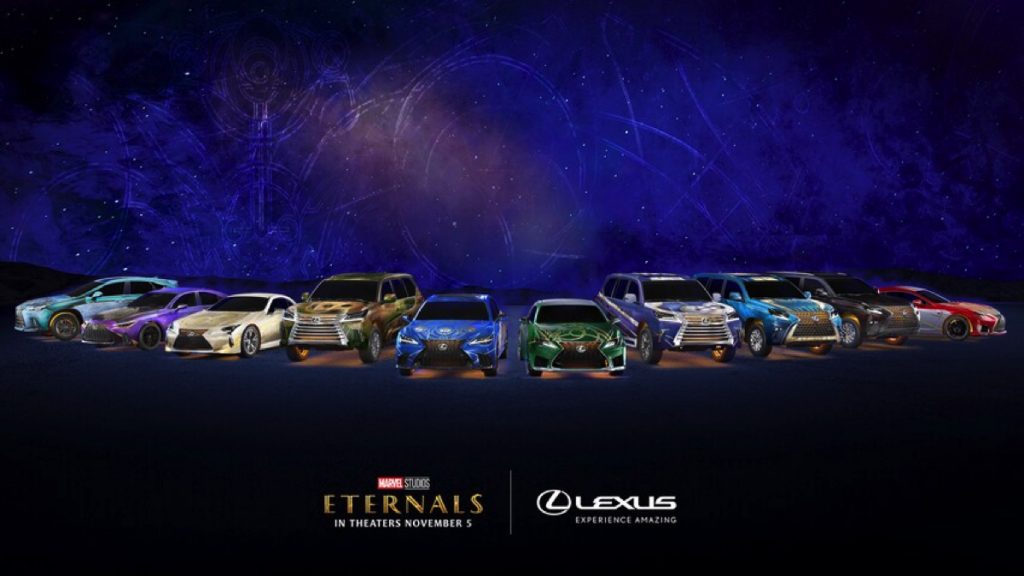 Driving a nice car can make you feel pretty cool. It may even leave you feeling like a superhero. At least that’s what this collection of vehicles from Lexus wants you to feel. Lexus and Marvel have teamed up to create a line of concept vehicles. The cars are based on characters from Marvel Studios’ newest movie, “Eternals.”

The line of Eternals concept cars include Lexus models GX, LX, LS, IS, RC F, NX, and LC500. Each car wrap is modeled after a character and their superpower.

These are a far cry from Bow Wow’s Hulk car in “Fast and the Furious: Tokyo Drift.”

Admittedly, I kind of like the Hulk car? But these character-inspired cars are on another level. Lexus has provided descriptions for each of these “Eternals” concept cars, including why each model matches the associated superhero.

Ajak, played by Salma Hayek, is a powerful, commanding woman. She is paired with one of the most capable SUVs in the land, the GX.

Druig, played by Barry Keoghan, is a bit of a rebel in the movie, with super strength and stamina, making the GX a fitting reflection of his character.

As the strongest Eternal, Gilgamesh, played by Don Lee, is a kindred spirit to the biggest, most powerful Lexus SUV, the LX.

The LS, Lexus’ flagship luxury sedan, is a match with Ikaris, played by Richard Madden, considered the tactical leader of the Eternals.

Kingo, played by Kumail Nanjiani, is paired with the bold, powerful Lexus IS, which he drives in Lexus and Marvel Studios’ parking spot video.

The fastest Eternal, Makkari, played by Lauren Ridloff, is the perfect match for the quickest car in the Lexus lineup, the RC F Track Edition.

The LX is technologically advanced, making it an ideal fit for Phastos, played by Brian Tyree Henry, the technological guru of the team.

The NX, a crossover that can do anything, is a perfect complement to the illusion-casting ability of Sprite, played by Lia McHugh.

Thena, played by Angelina Jolie, is a natural fit with the sleek and stylish Lexus LC 500.