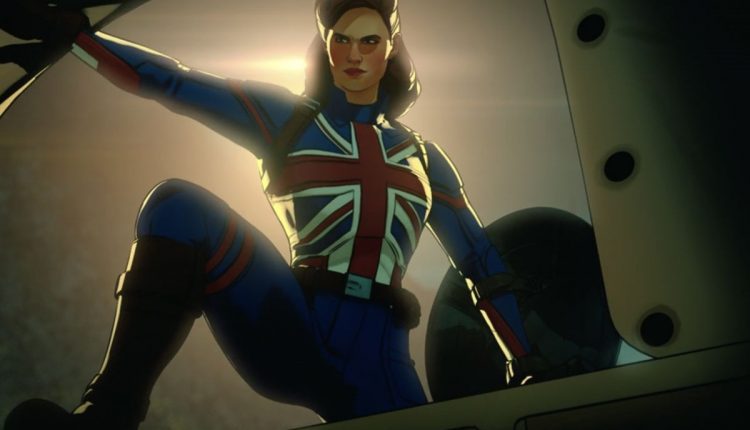 Marvel’s “What If…?” Episode 1 Dazzles With Possibilities [Review]

I don’t want to go as far as to say I’m rooting for Marvel to fail, more so I’m continuously shocked to see that they’re STILL able to succeed (in a major or minor way depending on who you talk to) for so long and so often. We have not entered the point where Marvel is so confident in their formula and plan for sprawling and seemingly endless connected narratives that they’re literally playing jazz. The new animated series “What If…?” on Disney+ is exactly what the title suggests, with episode 1 aptly titled “What If…Captain Carter Was the First Avenger?” It seems it wasn’t enough for them simply mention the multiverse or allude to the idea that it exists. “What If…?” gives viewers a glimpse of what a multiverse could look like, shedding any restraints and operating with profound freedom. The series playfully explores new and exciting worlds that reimagines familiar stories with endless possibilities and stunning visuals.

There’s so much to enjoy in this first episode that it’s hard not to simply say, “it’s great, everyone should watch it” and make that the end of the review. “What If…?” truly dazzles, and even you’re familiar with the comic series or have an idea of what to expect, the series premiere still manages to surprise. This first episode tells a different beginning to the titular hero, where Peggy Carter (Hayley Atwell) is injected with the serum to become the first avenger instead of Steve Rogers (Josh Keaton). Captain Carter becomes the super solider the war against hydra needs, with some familiar friends along the way. What we come to realize about the series right away is that it is framed as the stories of The Watcher (Jeffery Wright), a powerful, god like being who can see all possibly multiverses but cannot and will not interfere. This allows “What If…?” to pretty much do whatever it wants, and episode 1 certainly comes out of the gates swinging.

The animation is beautiful, pacing whisks by at a rapid pace, playfully reinterpreting the entire “Captain America: The First Avenger” film within a 30 minute episode. Powered by stunning visuals and many of the original voice cast reprising their roles, “What If…?” strikes the perfect balance between familiarity and unencumbered freedom.

It knows the beats it needs to hit to tell the story we know, but never allows itself to be solely tied to those events, and in the great words of Christopher Walken on “Saturday Night Live,” “What If…” explores the space. Honestly the episode so good, it kind of makes you wish the whole series was about Captain Carter, as Atwell breaths fresh life into the capabilities of her character and really owns both the shield and the hero mantel.

Additionally, while this is a new, unseen timeline in the multiverse, “What If…?” never loses the heart and soul of Carter and Rogers’ relationship. Even in an animated reimagining, their romance together is believable and earnest, proving that it truly has nothing to do with who’s the better hero or who’s got the muscles. They are made for each other in seemingly every timeline imaginable, and that kind of transcendent love makes you feel for them both all throughout the episode.

Can we pause for a minute and talk about how great Bradley Whitford is in just about everything? Playing a bit part that only serves the current story being told, Whitford is unmistakably himself, and I mean that in the most complimentary way possible. Again, episode 1 of “What If…?” is so good I could watch an entire series of Captain Carter, with Whitford’s Colonel John Flynn as a welcomed recurring character. I don’t want anyone to think his character is more important that it is; it’s not, I just love him so much and even with limited screen time and even less dialogue, Whitford is so good he deserves an honorable mention.

“What If…?” is directed by Bryan Andrews who has served as a storyboard artist for numerous Marvel films, including “Infinity War” and “Endgame” to name a few. A.C. Bradley (“Trollhunters: Tales of Arcadia“) serves as both the head writer and producer, with Stephan Franc serving as the lead animator. Andrews brings his experience to the show and it shows, demonstrating his vast knowledge from previous works to help strike that tonal balance. Franc has a wonderful animation style, and I can’t stress enough how gorgeous everything looks throughout the whole episode. It’s all so crisp and clear, just shy of popping into live action which provides and immersive viewing experience. A.C Bradley really lets loose here but never loses focus, a masterful feat of storytelling we don’t get very often and is even harder to do this well. She is set to serve as a consulting producer for the upcoming “Ms. Marvel” series as well, which after viewing “What If…?” has me looking forward to that project more now.

So, this series is off to a great start, and knowing that it is 100% canon (as confirmed by Kevin Feige himself) only time will tell what the implications of watching the multiverse unfold will have on the future of the MCU. For now, we simply get to be the watcher for a bit, and relish in the wonders of no holds barred Marvel re-imaginings. Marvel Studios Television continues to thrive, and even their riskiest project yet in “What If…?” once again captures the magic of our favorite universe, doing so through the lens of exploring brand new ones we didn’t know we wanted to see but now can’t imagine living without.