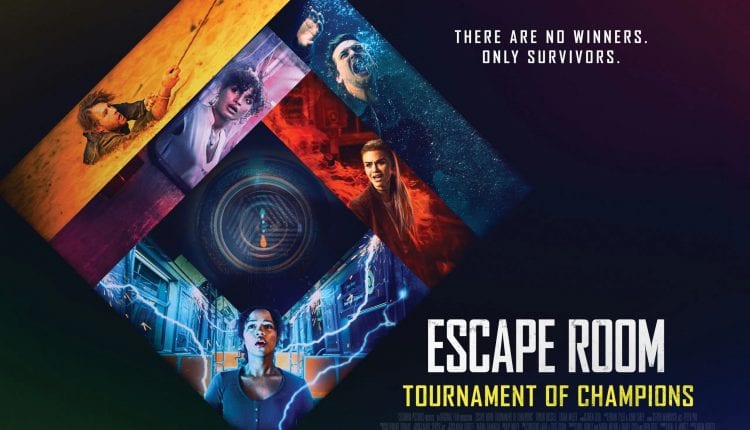 “Escape Room: Tournament of Champions” is an Awesome Thrill Ride

Two years after the sleeper thriller “Escape Room” hit theaters, we are treated to a sequel from Sony Pictures. And I am happy to say that it doesn’t disappoint. Usually sequels tend to try to be bigger than the original and it ends up bloated. That said, “Escape Room: Tournament of Champions” doesn’t fall into this trap.

Introducing us to a new cast of characters, Nathan (Thomas Cocquerel), Rachel (Holland Roden), Brianna (Indya Moore), and Theo (Carlito Emmanuel), all previous winners, along with the first film’s winners, Zoey (Taylor Russell), and Ben (Logan Miller), we are thrown into a brand new ride with even bigger and deadlier traps. Because, let’s face it, when you’ve already beaten a game, you know that you’ve got to try it on hard mode. Just like “Ghosts’N Goblins” if you know what I mean.

The pacing for this movie is great. It starts with a small recap and then moves right into the action. And once the game starts, there is barely any time for either the characters or the audience to take a breath before the next harrowing puzzle.

Honestly, it felt like I was binging a show and just lost track of the time. By the time I knew it, it was over and just thought to myself, “They can’t just end it here, it was too fast!” Only to realize it had already been an hour and a half.

There is an interesting twist at the end that can kinda feel a little contrived, but it actually makes sense. Now, I won’t be giving it away because you just have to see it for yourself. I can only say that I hope there is a third part because this film series definitely needs it.

“Escape Room: Tournament of Champions” is currently in theaters now.

Watch: Adorable Scene of Wall-E and Eva Interacting On Earth