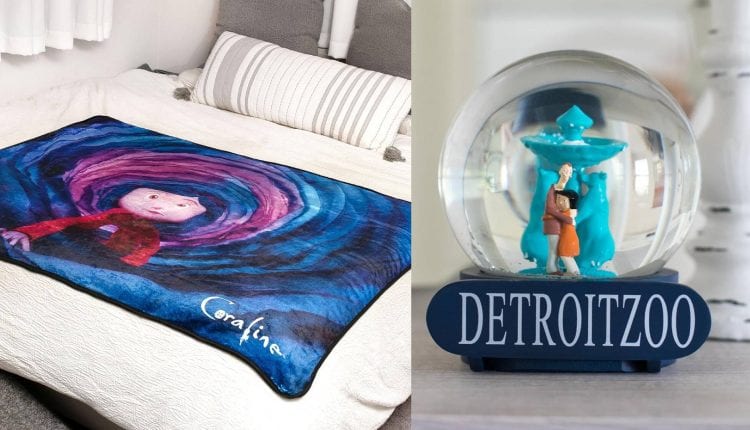 Toynk never fails to get us interested in their offerings. They’ve just announced some really cute “Coraline” home décor and it has me wanting everything. Check out all that they announced below!

Cozy up in the Other World with this exclusive Coraline throw blanket. Inspired by Laika’s stop-motion masterpiece, this cozy piece of home decor will take you to a new pocket dimension full of snuggles. The character design features Coraline Jones crawling into the unknown, where she enters a hidden door to the Other World.

Soft to the touch, this lightweight fleece blanket is crafted with high-quality polyester material. Measuring a sizeable 45 x 60 inches, you can bundle up to stay safe from the Beldam. Trust us, having buttons sewn in your eyes isn’t nearly as comfortable as this plush cover.

This warm and cozy fleece blanket is full of Pink Palace charm, making a comfy addition to any realm. Place it anywhere in your living space or take it along to events, such as the Mouse Circus! Enter a dark netherworld with this officially licensed Coraline Throw Blanket.

Be careful what you wish for (and heed the warnings of talking cats). Explore a dark netherworld with this officially licensed Coraline bobble figure. Inspired by the creepy stop-motion animated film, this bobble figure is a must-have addition to any collection.

Complete with high-end sculpted detailing, this PVC statue features Coraline Jones in her adventurous get-up. The young explorer is depicted in her iconic rain gear outfit, including her bright yellow coat and matching boots. Her ensemble is accessorized with a pair of pinstriped socks and a brown satchel.

Dancing and bobbing with every turn, the attached platform provides extra stability to ensure this Coraline bobble figure doesn’t get lost in the Other World.

Things are not always what they seem. Explore a dark fantasy world with this officially licensed Coraline bobble figure. Inspired by the classic stop-motion animated film, this collectible bobble figure is a must-have addition to any fan’s collection.

Specially crafted with sculpted detailing, this PVC statue features the jaded young girl standing with her arms crossed next to her feline guide, the cat. Standing at approximately 6.5 inches tall, this bobble figure is attached to a platform that is designed to stand on flat surfaces. Coraline is depicted in her iconic outfit, including her pink pinstripe top, jeans, and yellow boots. Capturing even the smallest details, a tiny yellow ribbon decorates her vibrant blue hair.

Take home Coraline’s mother’s special snowglobe. Containing Coraline’s parents who were trapped there by the Other Mother, this Coraline movie snow globe is designed after the same snow globe found in the movie. Complete with details such as the Detroit Zoo nameplate and the dancing bears, this Coraline snow globe is the perfect piece of Coraline merchandise for any fan of the movie or book. Place this Coraline collectible up on your bookshelves or on your desk as a subtle nod to a wonderful story.

Standing at 6 inches tall, this officially licensed Coraline snow globe rests on a wooden base for an elegant display. The globe itself is made of glass and filled with water. Let your heart fill with warmth as you watch the small flecks of snow pellets swirl around the globe and thoughts of the first time you ever saw the movie or read the book come flooding back into your mind. This treasure can be a wonderful memento on your shelves or presented as a thoughtful gift to your friends or family who love “Coraline.”

You can shop the entire “Coraline” collection on Toynk.com now!

Watch: Adorable Scene of Wall-E and Eva Interacting On Earth