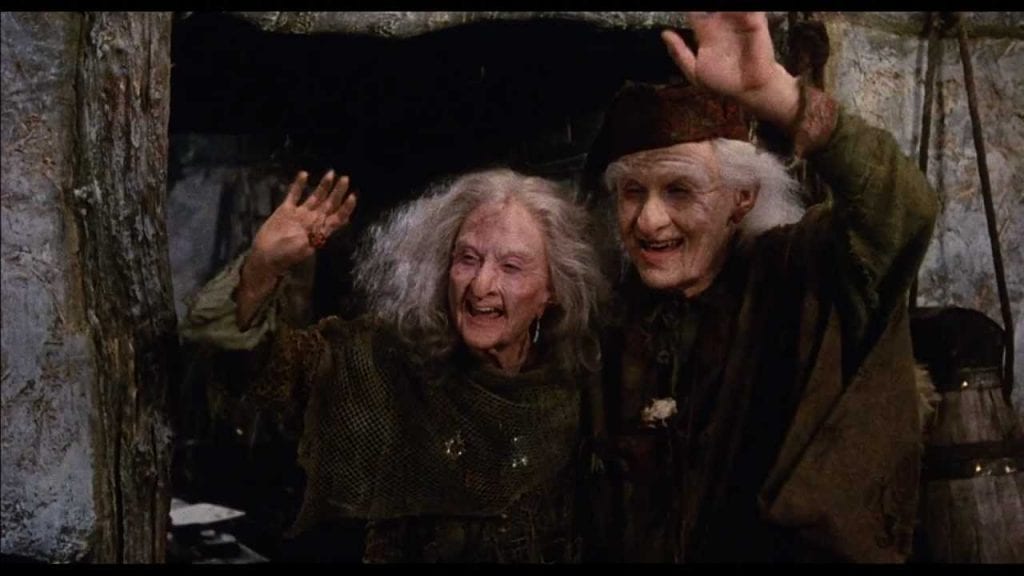 Today we are counting it down with our top 14 movie characters that had under 15 minutes of screen time that affected us or the movie itself. Now mind you, there are A LOT of characters that could have made it on this list. But, I chose characters I believed had a much bigger impact than others. If there is someone you think you would think should be on this list, let us know.

I mean yeah, Ziggy Stardust himself, playing genius-inventor (an old-fashioned Tony Stark) Nikola Tesla. His screen time was very low for this movie, but when he WAS on screen, he brought the wow factor. Sure we could argue that him playing Jareth from “Labyrinth” was his best role ever [editor’s note: or, you know, “The Hunger“], but as Nikola Tesla he was magic (pun quite intended). I mean come on, when we first see Tesla, he’s calmly walking through a cloud of electricity. Now if that’s not an introduction to a character that forever sits in your mind, then no entrance should ever be thought of again.

13. Neil Patrick Harris as Himself, “Harold and Kumar Go To White Castle”

The man, the myth, the legend, NPH. This man is welcome to appear in any movie (especially in the upcoming “The Matrix 4“) and his role in this movie was Legen- wait for it -dary, legendary. You can easily get so caught up in Harold and Kumar and their monotonous shenanigans, but when Neil comes into the picture, then the fun really begins as NPH pokes fun at himself for the rest of the movie(s).

Prejudices make us believe in stupid things. It makes us look at people differently; it makes us behave differently towards people, just because we hold prejudices. And that is exactly what Kevin McCallister thought of old man Marley who shoveled snow. Turns out, he saves him from the bad guys in the end and restores Kevin’s faith, destroying his unpleasant habit of listening to bad gossip and holding prejudices in his head.

Seraph was one of the few people Neo could not beat. Their battle ended in a stalemate. This man could take down Agent Smith on his own, plus he kept the Oracle alive for as long as he did. It’s sad we didn’t get to see more of him, or perhaps a spinoff, maybe we will bump into him again in “The Matrix 4.”

Brooks was the kind old man that Andy Dufresne meets in prison. We see him as they grant him parole back into the community where he gets a place to stay and a job as well. For the audience we think Brooks is finally free, but for Brooks, he was free while he was in prison; he had it all. When Brooks committed suicide it hit us all, telling us that even freedom has its toll.

This man was born to live amongst the clouds, bestowing intimidation and sex appeal as it suits him. Played to suave yet sinister perfection by Williams, we first meet Lando on a landing platform in the Cloud City he rules, he threatens Han and Chewie, then embraces them, and finally flirting with Leia. With his betrayal of his friends by handing Han over to Vader and Boba Fett to his ultimate redemption in “Return of the Jedi” we see little of his character but he had a tremendous impact on the fans and moviegoers alike. (I’m still pondering why the man with a great fashion sense is wearing Han’s clothing in “Return of the Jedi.”)

8. Michael Rooker as Yondu, “Guardians of the Galaxy Vol. 2″

Yes, I know Yondu was in “Guardians of the Galaxy Vol. 1,” but we are looking at the characters that affected us or the movies they were in, and what more impact can you have than to have the man with the angelic whistle sacrifice his own life to save his adoptive son, Peter, with his last words “I’m sorry I didn’t do none of it right, I’m damn lucky you’re my boy.” And you will have to admit that you shed a small tear as you saw the last moments of Yondu and Peter’s heart breaking.

7. Wilson Volleyball as Wilson, “Cast Away”

I know what you’re going to say, “Brian, Wilson is an object not a person or character.” Ah, you have a valid point, but where would Tom Hanks’ character, Chuck Noland, be without Wilson. Wilson represents that the need for connection is so deep that it doesn’t need to be reciprocal to hold extraordinary significance for individuals. Chuck needs companionship so badly that he creates an imaginary friend with whom he bonds deeply. Yet it’s not really a bond. Also, how many of us are guilty of seeing a Wilson volleyball and not screaming “WILSON!” dramatically? (Don’t judge me)

6. Bill Murray as Himself, “Zombieland”

The man himself is a class apart from many. When he made a cameo as a zombie-esque version of himself, the heroes were fighting amongst themselves (as they do for the entire movie), but as they all hung out together with Murray, they have a good time and bond with one another, while strengthening whatever they had together. With Murray’s presence so jovial in the movie, it makes you not even feel bad when he dies as quickly as he appears.

5. Billy Crystal and Carol Kane as Miracle Max and Valerie, “The Princess Bride”

First off, why have we not seen a spin-off of these two? With only 5 minutes of screen time, Crystal and Kane made those 5 minutes some of the best in our lives. With much of their lines ad-libbed, these beloved characters were quick to love and remember and just as quickly easy to forget. But to any die-hard fan of this cult classic movie, the scene with these two is considered one of the best in the movie. “Have fun stormin’ da castle!”

4. Evan Peters as Quicksilver, “X-Men: Days of Future Past”

If I could save time in a bottle, the first thing that I’d like to do is to watch Quicksilver’s prison super-speed scene on repeat. When Quicksilver entered, no one expected one of the most brilliant scenes in movie history. He stole the show like no other small character could. And thanks to Quicksilver’s quick bout of awesomeness, the movie could continue forward. Because of this scene, his scene in “X-Men: Apocalypse” was even more superb.

Aren’t we all glad that they didn’t go with Brando’s suggestion that he play Jor-El as a bagel? This iconic actor (who was hated on set by most of his cast members) brought the father of the Last Son of Krypton to life. While we see only a few scenes with Brando as Jor-El, we hear his voice and the knowledge and wisdom that he passes on to Kal-El who will become Superman. Sure Martha (Why did you say that name?) and Jonathan Kent raised Kal-El to hold human virtues and to do good, but it was when Jor-El taught everything Kal-El needed to know about being a Kryptonian that changed him for the better.

In the first few moments in A New Hope, we meet the iconic Darth Vader. To many a movie-goer and character alike, he was intimidating, and the demonstration of his rather impressive skills – namely Force choking was terrifying and had opened a new door to the mythology of Star Wars. Even though he was the big bad of the trilogy (next to the Emperor of course) we only see him on screen in this movie for about 8 minutes, but those 8 minutes we know that the Dark Side was a force to be reckoned with. If you don’t agree with me on Vader, then I find your lack of faith disturbing.

Yes, I know Coulson was in previous Marvel movies i.e. “Iron Man”, “Iron Man 2″ and “Thor”, but it’s his brief time while in this movie that makes it the reason he’s on here. I’m going to say this, if it wasn’t for Coulson we would not have the Avengers as a team, because of his sacrifice he made to stop Loki is why everyone works together, especially Tony Stark who never really cared much for anyone (on the exterior). Coulson is my number one because as aforementioned, without him, we wouldn’t have the MCU Avengers today.